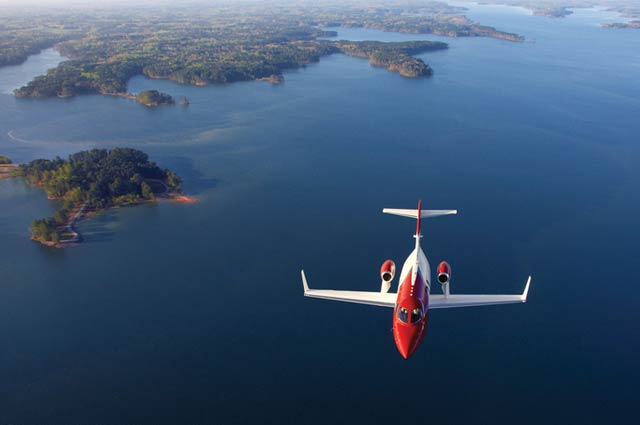 The HondaJet is the result of more than 20 years of aviation research. Key HondaJet innovations include the optimal over-the-wing engine mount configuration to reduce drag, natural-laminar flow technology, and an advanced composite fuselage. Photo courtesy of Honda Aircraft Co.

Innovations including an engine mounted above a natural laminar flow wing have put HondaJet designer Michimasa Fujino in esteemed company: On Sept. 18, the American Institute of Aeronautics and Astronautics bestowed the 2012 AIAA Design Award on Fujino, president and CEO of Honda Aircraft Co.

The award puts Fujino in the company of some legendary designers, including Joseph Sutter, awarded for the Boeing 747; F-16 designer Harry Hillaker; and Burt Rutan recognized for the Voyager.

“The AIAA aircraft design award is the highest honor, and I am honored by this recognition,” Fujino said in a statement announcing the award. “I am so glad that HondaJet's unique (engine mount) technology is acknowledged as a significant technological advancement for aircraft design.”

The over-wing mount frees up cabin space while improving aerodynamics, and is the product of a 20-year research effort. AIAA deemed the effort “pioneering,” and noted that Fujino shared several technical papers and research data with the design community along the way.

While engine tests in 2011 delayed the original schedule, company officials report progress, and a plan to begin production this year, with certification targeted in 2013.