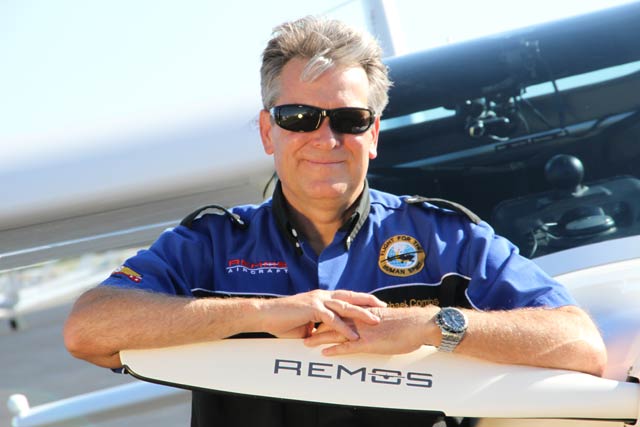 A little more than two years after he departed on a months-long mission to land a light sport aircraft in all 50 states, sport pilot Michael Combs will finally be able to check off that final, elusive destination: Hawaii.

Combs and his Remos GX will travel from Travis Air Force Base in Sacramento, Calif., next week, along with several other aircraft that are scheduled to fly at the 2012 Kaneohe Bay Airshow on Sept. 29 and 30. The Remos, known as Hope One, is listed as a performer along with the U.S. Navy Blue Angels, Kirby Chambliss, Mike Wiskus, and others.

The cross-country that Combs dubbed “The Flight for the Human Spirit” has taken him to 49 states and more than 200 airports. To get to Alaska, he had to take a private pilot with him to act as pilot in command in Canada airspace, because Combs would have needed a medical certificate to act as PIC in Canada.

Getting the Remos to Hawaii proved a stumper. Its 25-gallon range means it could not cross the swath of the Pacific Ocean between the California coast and Hawaii. And, while its wings can be folded so that it can be transported in a container, the cost of the transport—$20,000 was the estimate from one well-known overnight carrier—was prohibitive.

The Remos is to be airlifted to Hawaii on Sept. 25, along with other aircraft set to perform at the airshow. Once he has flown it in that state, Combs will be the first sport pilot to successfully fly the same aircraft into all 50 states, and Hope One will become the first LSA to touch down in all 50 states.

“We have a lot of fans around the world, and the comments of support have been amazing as word has spread of the upcoming success of this mission,” Combs said. Fans can track Combs’ progress on the website, on Facebook, and on Twitter.