Get the app Get the app
AOPA Members DO more LEARN more SAVE more - Get MORE out of being a pilot - CLICK HERE
News & Media IFR Fix: Steeper than you think

IFR Fix: Steeper than you think 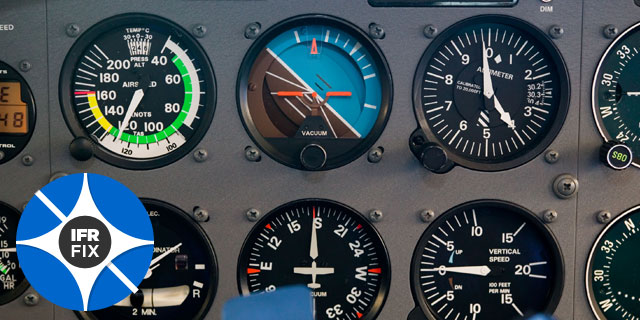 The directional gyro is spinning like a pinwheel. The pilot has moved both hands to the yoke to keep the nose of the attitude indicator’s miniature airplane pinned slightly above the horizon. G-forces make their presence felt as the assigned heading moves within 30 degrees of the 12-o’clock position. The pilot begins a rollout.

Whether performed visually on a flight review or by instruments during a proficiency ride, steep turns are exhilarating, physical, and instructive. Vector diagrams in a book are okay. But when you carve lift into horizontal and vertical components with your bare hands to push an airplane around a turn, and unwind the aggressive inputs to nail the rollout heading—well, isn’t that why we’re here?

Loosened up by the maneuver, it’s back to practicing real-world instrument flying, where “steep” has a very different meaning. “For purposes of instrument flight training in conventional airplanes, any turn greater than a standard rate is considered steep,” says Chapter 5 of the Instrument Flying Handbook.

The standard-rate turn, as instrument pilots learn, is the backbone of practically all turning maneuvers in IFR flying—shallow enough to avoid the overbanking tendency, but still effective for turning.

Can you think of an IFR exception to using a standard-rate turn? Small heading changes should be made at half standard rate.

There’s a rule of thumb for estimating the bank angle for a standard-rate turn: It is about 15 percent of the true airspeed.

Is your turn coordinator accurate? On the next practice session, find out, using a timed turn. Then, as the book says, “note the corrected deflections.”

Okay, you got distracted, and the aircraft has become overbanked. This you realize when you add back pressure, but the descent rate does not respond, and airspeed is increasing. Time for a nose-down unusual-attitude recovery!

That’s when the practice of those steep turns may prove their worth, with the memory of those increasing g-forces keeping your control touch light, and your respect for gravity, unwavering.