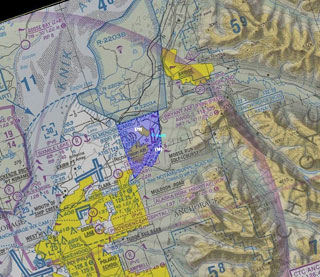 AOPA is urging pilots who fly in the busy corridor around Anchorage, Alaska, to weigh in by Oct. 9 on an FAA proposal to establish Class D airspace at Bryant Army Air Field.

The proposal, which cites increased complexity and volume of air traffic, points out a need for an overall review of the busy airspace, in which numerous civilian and military airports and special-use airspace are situated, said Melissa McCaffrey, AOPA senior government analyst.

The goal should be airspace simplification, she said.

“In an already congested airspace area, AOPA is concerned that establishing of Class D airspace over Bryant Army Airfield would further compress air traffic,” she said

McCaffrey encouraged pilots to become familiar with the notice of proposed rulemaking and submit their comments to the FAA.

Dan Namowitz has been writing for AOPA in a variety of capacities since 1991. He has been a flight instructor since 1990 and is a 35-year AOPA member.
Go to Dan Namowitz's Profile
Topics: Airspace, Alaska, Travel