Get the app Get the app
AOPA will be closed July 4th, in observance of the Independence Day holiday. We will reopen at 8:30 am ET on Tuesday, July 5.
News & Media Fly the new Just Aircraft SuperSTOL

The landing procedure in Just Aircraft's new SuperSTOL seems nothing short of suicidal.

On final approach at 500 feet agl, chop engine power to idle and hold the control stick full aft. Then just sit there.

Leading edge slats on the wings deploy automatically at 55 KIAS, and the airplane slows to 40 KIAS while the rate of descent increases to about 800 feet per minute.

Continue sitting there with full up elevator and idle power until impact.

Actually, the touchdown on 29-inch Alaskan Bushwheel tundra tires is remarkably soft as two long, externally mounted shock absorbers on the main landing gear (and another shock absorber on the tailwheel) cushion what in almost any other airplane would be a seismic event.

The SuperSTOL touches down on the main wheels, followed a few seconds later by the tailwheel. With moderate braking, the airplane comes to a halt after a landing roll of 50 feet.

“I have no interest in designing airplanes that go fast,” said Troy Woodland, creator of Just Aircraft's line of high-wing, tube-and-fabric, two-seat (side by side), Rotax-powered aircraft: the Escapade, a bare-bones trainer; the Highlander, a rugged backcountry flier; and the SuperSTOL—an extreme, no-compromises bush airplane with landing gear reminiscent of a Pilatus Porter or Fieseler Storch. “I am always trying to get airplanes to stall slower and land slower so that they can safely take off and land at places where there are no runways at all.”

The SuperSTOL cruises at about 90 KIAS with oversized tires. It also takes Woodland’s design concept about as far as it can logically go given the Just Aircraft design requirements for all their experimental kit aircraft to have folding wings on an airframe that legally can be trailered or towed on roads.

The SuperSTOL weighs 779 pounds empty, carries up to 30 gallons of fuel in two wing tanks (that drain into a single header tank) to feed its 100-horsepower Rotax ULS engine. It has a maximum gross weight of 1,320 pounds if registered and flown in the light sport category, and 1,500 pounds in the experimental/amateur-built category.

Entry to the 44-inch-wide cabin is through two top-hinged doors that can be left open in flight. The throttle is located in the center so it can be easily reached from the left or right seat, and both occupants have a control stick and dual toe brakes (two-caliper Matco hydraulic brakes).

Engine operation is standard for Rotax engines so there’s no mixture control. The prop is a three-blade, ground-adjustable model. The fuel is simply on or off (there are no left or right options).

The tailwheel has a locking mechanism, but Woodland prefers taking off and landing without it unless there’s a strong crosswind or a steep slope. The airplane sits at a high deck angle of about 12 degrees so forward visibility is limited during taxi, and it’s necessary to S-turn and view the pathway ahead through the expansive view out the sides of the aircraft.

The takeoff roll is quick, so don’t blink.

Apply full power with the elevator neutral and the tail starts to rise almost instantly. Hold a tail-low attitude and the airplane flies off at about 35 KIAS after a ground roll of 150 feet (at sea level with a 4-knot headwind).

In level or turning flight, visibility is excellent through the clear doors, windshield, and expansive sky light. Woodland calls the control harmony “by far the best of any aircraft I’ve designed.”

In slow flight, the leading edge slats keep the ailerons effective below stall speed. Deploying the Fowler flaps to their full 40-degrees of travel creates a huge amount of drag—but the aircraft can easily takeoff or go around with full flaps.

Just Aircraft is based at a 400-foot strip grass strip on a 20-degree grade in South Carolina. While such a confined area puts it off limits to all but a few general aviation airplanes, Woodland considers it roomy in the SuperSTOL.

“I’m building a 250-foot runway in my back yard, and that’s going to be plenty for this airplane,” he said. “The SuperSTOL is meant for flying from back yards to clearings or meadows. For it, runways are just about irrelevant.” 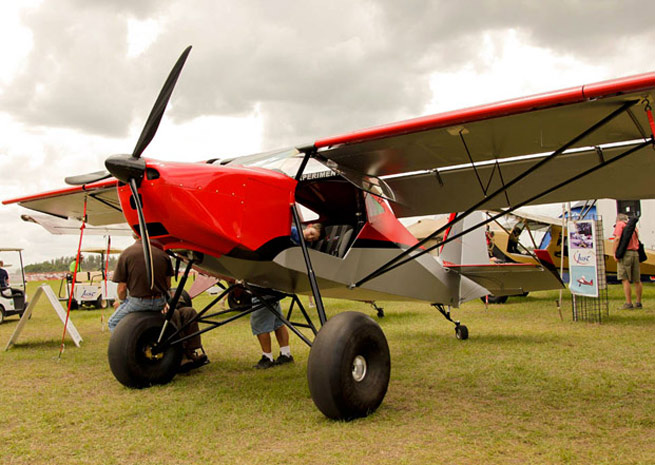