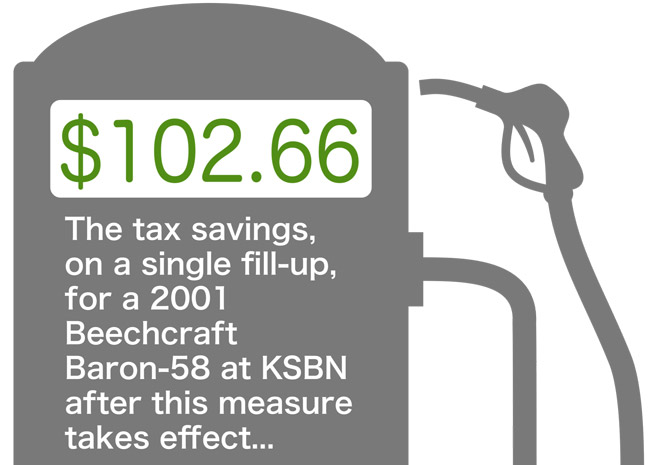 Pilots fueling up general aviation aircraft in Indiana can expect to see savings of $100, $250, or more each time they taxi to the pumps now that lawmakers have passed an AOPA-backed package of aviation tax exemptions and restructurings. The joy also will extend to lower sales-tax line items on their aircraft maintenance bills—and that should provide a shot in the arm to the state’s aviation industry and even rid Indiana of a reputation for imposing the highest fuel taxes in the nation, AOPA said.

The new measure should achieve all that by removing the state sales tax on 100LL and jet fuel and by restructuring the previous excise tax on aviation fuel to a fixed total state tax rate.

Based on current avgas prices, that lowers the current total state fuel tax of $0.60 per gallon to a firm excise tax of $0.10 per gallon.

The change will save owners upward of $100 or more per fill-up of a piston twin such as a Beechcraft Baron. It means savings of more than $220 per fill-up for a Beechcraft King Air 200 and even more for larger fuel capacity aircraft—in all cases amounting to thousands in annual savings, especially significant for high-flight-time aircraft.

A flight school with a single training aircraft that flies daily could realize estimated savings of more than $40,000 a year, multiplied for each aircraft utilized in a fleet.

AOPA and other aviation supporters prepared a strategy well in advance, aware that the measure would have to be advanced during a session in which many other significant issues in the state’s biennial budget would dominate attention and be debated through myriad revenue proposals. (Indiana does not currently directly reinvest aviation tax revenues into its aviation infrastructure.)

Months before the session began, AOPA met and worked with key legislators to initiate the measure to exempt avgas and jet fuel from sales tax, cut and stabilize the excise tax on avgas, and exempt parts used in aircraft repairs and maintenance from sales tax. All of this would more competitively position Indiana to boost GA activity, as well as jobs and revenue. Other states, including Maine, have reaped similar benefits after enacting more GA-friendly tax measures in recent years.

The effort also brought together state aviation businesses and local aviators to team with AOPA and key legislators throughout the legislative process—including a pre-session hearing at an Indiana airport, numerous meetings with lawmakers, and detailed testimony in hearings of the Senate Tax and Fiscal Policy, and the House Ways and Means committees. Having a local businessman like Matt Hagans of Eagle Creek Aviation, and companies like Lafayette Aviation, Muncie Aviation, Cook Aviation, Gary Jet Center, and Tom Wood Aviation to illuminate the issue “was invaluable throughout the process, as these individuals really stepped up to tell their stories and demonstrate the real breadth of the state GA industry,” said Kimberling.

"This means more jobs for Hoosiers as well as future leadership in the aviation and logistics industry,” Hershman said in a statement. “We want Indiana to remain competitive on all economic fronts and this bill will help achieve this goal by vaulting us from worst in the nation for aviation fuel taxes to among the best. I’m happy to have worked so closely with AOPA and local industry partners on final passage of this measure helping all aspects of the Indiana economy.” 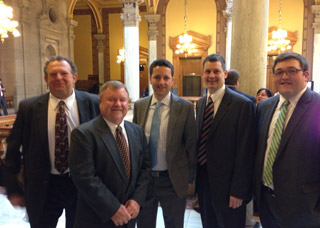 The Indiana strategy helps illustrate how AOPA continues to work to proactively to identify and remedy prohibitive tax policies at the state level. Numerous successes strategically lower flying costs and help to keep members in the air.

A priority for the next legislative session will be to press for increased reinvestment of the restructured tax and fee system by urging that a portion of proceeds from aviation taxes be dedicated for reinvestment in aviation infrastructure, Kimberling said.

“AOPA deeply appreciates the Indiana leadership, particularly Senate Majority Leader Brandt Hershman and Speaker Brian Bosma for carefully examining the issue and recognizing the urgency to move forward with this game-changing tax remedy,” said Kimberling. “They truly grasped the issue at hand and stepped up to guide and work with us to see this measure through as a priority, among all the other state fiscal issues, to boost the GA industry and broader economy with job growth as a continued state priority.”

Beyond the fuel component, “exempting aircraft maintenance from the sales tax was the other key piece of the puzzle,” said Bryan Budds, AOPA Great Lakes regional manager, who worked alongside Kimberling on both issues.

“Indiana had to respond, as other states have seized on their neighbors’ tax structures to gain competitive advantages for their aviation businesses,” he said. “Excellent Indiana repair shops have been unable to compete by attracting out-of-state aircraft for services, and have seen the troubling trend of based aircraft leaving the state to save money.”

Budds said the action should provide short-term savings and boost bottom lines long term, “as we have seen in Maine, Florida, and other states that have enacted similar legislation.”

He also credited Eagle Creek Aviation, Muncie Aviation, and Beechcraft with helping to make the case to “reverse lost contracts, lost jobs, and lost economic activity,” much of which could be traced directly to neighboring Ohio. The state had previously removed the sales tax on maintenance.

As the success in Indiana underlines, AOPA continues to work in state legislatures nationwide on pro-GA reforms. Several state legislative sessions are scheduled to adjourn this spring, with others continuing later into the year and some remaining in session all year.

Dan Namowitz has been writing for AOPA in a variety of capacities since 1991. He has been a flight instructor since 1990 and is a 35-year AOPA member.
Go to Dan Namowitz's Profile
Topics: Advocacy, Aviation Industry, Financial