Training the best for the worst

Winter on Oregon’s Pacific Coast brings waves big enough to swat a 22,000-pound Sikorsky helicopter out of the sky. The Coast Guard likes the weather that way. That’s why the Advanced Helicopter Rescue School is located in Astoria, Oregon. Twice a year the school conducts a one-week advanced rescue training course (repeated four times in one month). Pilots call it the best week of flying in the Coast Guard. The school attracts the best pilots, hoist operators, and rescue swimmers in the Coast Guard. By midweek they’ll have all they can handle—but not as much as the real world can give.

Victims usually need help in the worst weather imaginable, and often at night. The rescue school doesn’t do “night” during the course; it’s hazardous enough in the daytime.

The curriculum was designed by Senior Chief Aviation Survival Technician Eric Biehn (pronounced bean), who worked his way up the ranks of Coast Guard rescue swimmers. Pilots fly the scenarios he designed as he watches from shore. He and his eight advanced swimmers are able to wrestle 300-pound (or more) victims up a cable into the cramped cabin of a Eurocopter MH–65 Dolphin or a larger Sikorsky MH–60T Jayhawk.

If you add the body fat percentages of all nine swimmers in Class 145, the one I observed, the total still might not equal five percent. Try squeezing your extra weight into an orange flight suit in front of these men and women, as I did, if you want inspiration for your ignored diet. (Out of 370 rescue swimmers in the Coast Guard, four are women. One of them is in Class 145.) Biehn’s phone number contains “008,” one number higher than the 007 of James Bond. Just sayin’.

Oregon weather will cooperate this time, and the course will go just as Biehn planned. On Monday the Pacific Ocean surf will have nine-foot waves that will give the swimmers, especially those from Miami, a chance to get used to rough waters. On Tuesday at the cliff there will be 20-knot crosswinds and pelting rain showers every 20 minutes. On Wednesday, near the open sea, 20-foot waves will be pushed by 36-knot winds, just four knots shy of the maximum allowed for training.

Lt. Cmdr. Dan Leary, a veteran Coast Guard pilot who switched to the MH–60T a year ago (and therefore must take the advanced training class), is just above the seven- to nine-foot surf for Monday’s exercise. There, his radar altimeter is useless. It indicates varying altitudes in rapid succession, requiring him to use his barometric altimeter to maintain the hover. He is just offshore of Fort Stevens State Park west of Astoria. 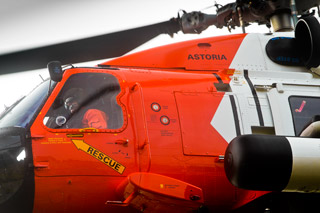 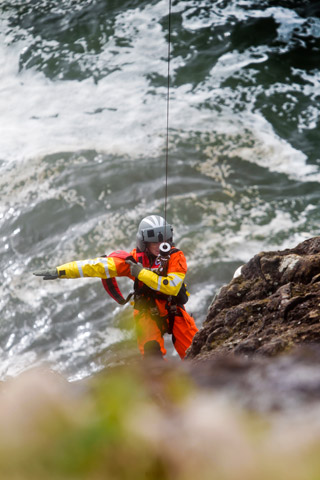 Leary needs to keep track of both the waves and the swimmers. The swimmers are blown south by the wind and moved constantly by the waves.

The student playing rescuer descends on the hoist and bear-hugs his supposed victim with his arms and legs. Leary then lifts the two out of the water, flies a short distance to smoother water, and puts them back in the ocean where it is easier for the rescuer to attach the victim’s harness. (That’s got to be a surprise to the victim; “We’re going back in?”) They both ride up into the cabin, then reverse the roles of rescued and rescuer.

Leary recalls a rescue off the Strait of Juan de Fuca (between Seattle and Canada). “We had a guy whose leg was crushed by a piston. He was working in a room where they had a spare piston. The thing is as big as a barrel. It fell on the back of his leg and crushed it. We had to go pick him up off a freighter. It didn’t sound bad until you got out there, and you saw that it was 90-knot winds and 40-foot seas. We knew if we didn’t go, this guy was going to die. The rescue swimmer we had that day, John Linnborn, saved the guy’s life. The victim was bleeding out in the back of the aircraft and John found a way to form a tourniquet from our hoist crank and saved his life.”

On day two training operations move to Lewis and Clark National Historical Park just across the Columbia River in Washington. It is near the Coast Guard’s largest search and rescue station, Coast Guard Station Cape Disappointment, at the river’s mouth. The surf and winds are pounding the shore so hard that cave rescue practice is cancelled. Often boaters in canoes will explore shoreline caves and get trapped inside, resulting in a call to the Coast Guard. There will be another attempt to train for cave rescue Friday and it, too, will be scrubbed.

Next on Tuesday’s agenda is cliff rescue, 80 feet up a 181-foot cliff at North Head Lighthouse. While two instructors wait on the cliff below, crews lower a rescue swimmer—more aptly called a cliff walker this time—on a cable to practice attaching a harness to a dummy.

Just overhead, the 26-knot winds, four knots shy of the maximum allowed for training, create a 60-degree crosswind. Should Leary and Lt. Chris Pulliam put the door towards the cliff, or is it easier to fight the crosswinds if they turn around, placing the door with the hoist operator away from the cliff? Leary decides that is the best approach and begins the eight lifts he will perform.

To maintain his position, he picks out a tree or bush and keeps it at a spot on
his window. Leary also is making corrections relayed to him by the hoist operator, called the flight mechanic or “flight mech,” at the door. 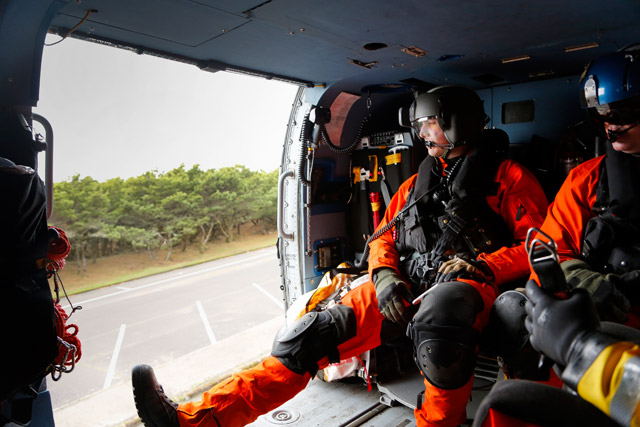 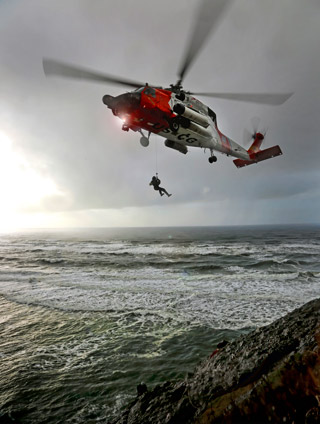 “All that time,” Leary said later, “you’ve got to be thinking about where’s the tail rotor, and main rotor also, so we don’t hit that against the cliff.” Leary admits it can be exhausting. “When I first started, I squeezed the cyclic [the control stick that tilts the rotor disk in a particular direction] so hard that my forearms would hurt. My calves would lock up. After you’ve been doing this for a while, you learn how to relax and make small control inputs. I’m not really exhausted anymore, but if it’s a real case, yeah, you’re exhausted. You’re just so completely, totally focused on rescuing people and getting them out of harm’s way.”

Light to moderate rainshowers come and go, pelting rescuers descending to the cliff and reducing visibility for the pilots. Observers retreat to their cars.

At the end of the day, it is time to retrieve the dummies and transport them to the top of the cliff, where an SUV is waiting. The MH–65 helicopter is at an angle to the rescuer on the cable below—something the rescuer can’t see; after lifting, the rescuer strikes the cliff wall, jamming a finger. His training is over for the week but he’ll be able to repeat the twice-yearly classes.

Biehn recalls a particularly difficult case. “One of my most difficult ones was in North Bend where the Yaquina River flows into the Pacific Ocean. There was a boat that was getting towed in between two jetties. The boat had lost steering capability. When they were crossing the bar, the rope parted and the boat was dashed against the jetty. Three people went into the water. Rescue boats couldn’t reach them because they were by the rocks. We got on scene and two people were hanging on to the six- to 10-foot wall of rocks of the jetty. Waves were 15 to 20 feet, smashing against those rocks. They lowered me down and I was able to get one. By the time I went down to get the other one, he was washed away and we were never able to find him.”

A mile south into the Columbia River from Washington’s Cape Disappointment Lighthouse is an area called the washing machine. It’s better known as the Columbia River Bar, and it has sunk hundreds of ships. It refers not to an actual bar of rock and sand; rather, it is made of slapping waves as the Columbia River pounds into the Pacific Ocean. Upsloping sand on the bottom deposited by the river makes the waves still higher. “We have waves coming from the two o’clock position, from the four o’clock, from the six o’clock, and from the eight o’clock,” Leary says. This is where he has to worry about his MH–60T getting taken down by a 15- to 20-foot wave.

Hoist operator Aaron Godsey is painting a word picture for Leary, helping him understand where the swimmers are and what the waves are doing. Unlike the surf, where rollers are predictable and Leary can see them coming, the action here is all under the aircraft; Leary has no idea what’s going on down there. Godsey calls the position of swimmers Bobby Florisi and Troy Ramsdell, but the two duck under a giant wave just as Leary and Pulliam look. Instructor Ian Gaertner helps Godsey, one of the unit’s top hoist operators, refine the directions for the pilots. Next time, he calls, “More right, more right,” instead of giving estimates in feet.

Swimmers have the option to free-fall from the helicopter if they choose. “For free-fall deployments we must hover below 15 feet,” Leary said. “I can’t hover at less than 15 feet and let him free-fall if the chance exists that we could actually get hit with a wave.”

That same day a swimmer from the MH–65 decided to time the waves and give free-fall a try. He mistimed it, falling 30 feet to the wave trough, rather than the crest. He was not injured.

“He was fine,” Biehn later said. “Some guys purposely do it, because they want to fall farther to get experience and test their abilities. They’re adventurous. Danger doesn’t bother them. It’s the type of person you want to attract for this job, because that is the person you want to go out on that dark and stormy night.”

Godsey recalls picking up a dad, mom, and six-year-old girl off a mountain at Gustavus, Alaska, north of Sitka. “A little six-year-old girl doesn’t know what to do. You have to get her to stay seated in the basket. You then have to deal with her when she is in the cabin, but you have to take care of the other people still out there.”

Scott Lloyd was a hoist operator on April 20, 2010, when the Deepwater Horizon exploded. When his crew departed to offer aid they saw what first appeared to be the sunrise on the horizon. It was the Deepwater Horizon on fire. He lowered swimmers onto a boat 200 yards from the fire to triage the victims and lifted five survivors aboard. For that, he and other Coast Guard aviators on the scene that night earned the Coast Guard Air Medal.