Get the app Get the app
AOPA will be closed on Monday, May 25, 2020, in observance of Memorial Day.
Already a member? Please login below for an enhanced experience. Not a member? Join today
News & Videos Pilots: Fran Bera 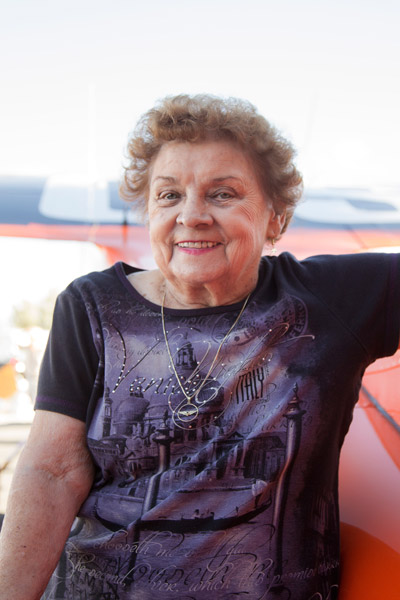 It was June 23, 1955, my seventeenth birthday, as I nervously began taxiing the Aeronca Champ in which I was taking my private pilot checkride. Fran Bera, the designated examiner, sat in the rear of the tandem cockpit, observing my every move. Mine was only one of more than 3,000 flight tests she would conduct, and my examiner was to become one of the most successful woman racing pilots of all time (if not the most successful).

Bera began flying at 16 without parental consent—no one in her family had ever been in an airplane. Persuading her parents to approve, she soloed a Piper J–3 Cub in Grand Rapids, Michigan; earned a purse full of ratings (including ATP); and propelled herself into a successful career of professional flying. This included ferrying surplus aircraft after the war, flight instructing, being a chief pilot for various firms, operating her own flight school, working as an Experimental test pilot, and serving a 15-year stint as a demonstration and sales pilot for Beech Aircraft.

At 23, Bera was the youngest—and one of the first—women pilot examiners, but she could not begin giving flights tests until turning 24, then the minimum age to be an examiner. “I was having so much fun getting paid for what I loved to do that I didn’t realize that I wasn’t ‘liberated,’” she says.

This five-foot bundle of energy likes to race, which she has been doing since 1950. She entered the All-Women’s Transcontinental Air Race (the “Powder Puff Derby”) 20 times, winning it seven times, placing six times, and showing four times. She also won, placed, or showed in 14 consecutive Palms to Pines Air Races. She has been successful in the International Women’s Air Race; the National Championship Air Races in Reno; and the Great Race from London, England, to Victoria, British Columbia. Her numerous honors include the prestigious 2011 Katherine Wright Award from the National Aeronautic Association.

In 1993 Bera flew her Piper Cherokee 235 to Siberia “just for the fun of it.” She traded her Cherokee for a Piper Comanche 260B because “I’m getting older and need to get places faster.” This December, when she turns 89, she will have been flying steadily for 73 years. “I’m going to wear out, not rust out,” she says.

Hours | Total flying time was 25,000 hours when she stopped logging 20 years ago.

Records | Bera used a Piper Aztec to break and hold for many years the world altitude record for light airplanes (Class C-1-d).

Extra | Working as an Experimental test pilot, Bera was the first woman to fly a helicopter without a tail rotor.