Get the app Get the app
Already a member? Please login below for an enhanced experience. Not a member? Join today
News & Media Earthshaking aircraft heads for history 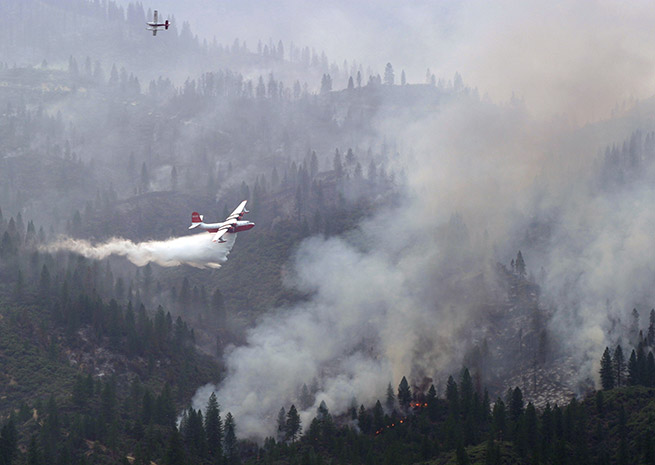 Wayne Coulson recalled the quakes created when the Martin Mars made a water drop.

“All I could feel was the earth shaking under my feet,” said Coulson, in a telephone interview telling the story of a particular fire sparked by logging equipment on his family’s timber tracts about three decades ago. The fire had started to run, and the Martin Mars, able to scoop up to 7,200 gallons of water (just under 29 tons) in a single load, was called in to stop it.

“It was like two drops and the fire was out,” Coulson recalled. “We thought we were going to burn up all of Vancouver Island that day.”

Coulson, the owner of timber tracts and Coulson Flying Tankers has, since 2007, owned and operated the last two Martin Mars flying boats still in service, a service life spanning 71 years that is now drawing to a close. Government officials in Canada have opted to hire smaller, modern aircraft to fight the thickly forested region’s many forest fires, and the future for this massive tanker with a history that began with service as a U.S. Navy flying hospital will most likely be limited to static display. 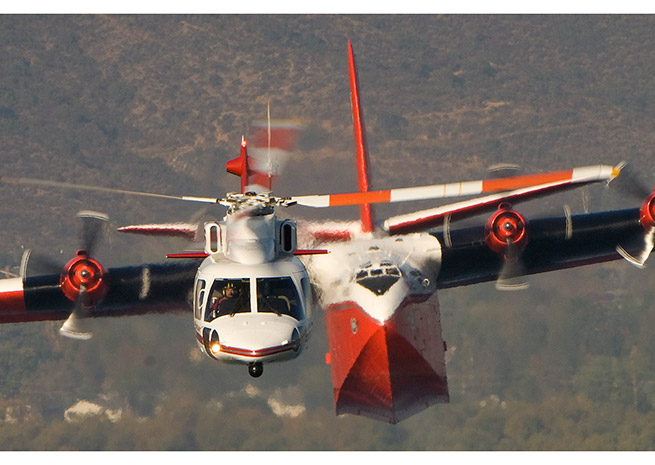 Coulson is working on a deal with the National Naval Aviation Museum in Pensacola, Fla., to trade the Philippine Mars, built in 1946, for other vintage aircraft, along with parts for the C-130 Hercules he operates in firefighting service. The Philippine Mars, one of seven Martin Mars flying boats built and among five that saw extensive service, has been repainted with its original U.S. Navy markings in preparation for its final journey.

Coulson hopes to trade the Hawaii Mars, the remaining Martin Mars, with another government, though that is an uncertain prospect.

“I don’t know that I’m going to pull it off,” Coulson said. “It still has a lot of life left in it … There might be another country that sees value in it.”

Coulson questions the wisdom of those who opted to hire much smaller air tankers to fight British Columbia fires, a decision that could doom the Hawaii Mars if Coulson is unable to find a buyer. Coulson said the government decision is shortsighted, made by people who have never lived in a raging fire’s path, or seen the lumbering giant swoop in to save the day.

“They don’t know what it’s like ... to have a monster aircraft come in and kill the fire,” Coulson said.

When California battled massive wildfires in 2000 with its fleet of helicopter tankers temporarily grounded, the California Department of Forestry and Fire Protection, better known as Cal Fire, called in the “monster aircraft” from Canada. It was the first of a series of California firefighting assignments for the Mars. On this first deployment, the massive water tanker (with a wing span slightly larger than an early-model Boeing 747) was stationed at New Melones Lake, a sprawling man-made reservoir spanning Calaveras and Tuolumne Counties in the Sierra Nevada foothills. The Mars, fire officials noted, needs space to operate—about five miles of clear approach, water pickup, and departure area to make its water scooping runs, which are in themselves a sight to behold. The Mars can draw a full load of 7,200 gallons in about 30 seconds through seven-inch inlets as it skims the water at 70 knots, its four 18-cylinder radial engines churning out a combined 10,000 horsepower for the climbout.

“You feel that kind of a gut feel of horsepower going by,” said Bob Coward, a Cal Fire pilot who coordinated aerial attacks on fires in 2007 and 2008, a tactical assignment similar to a forward air controller in the military. “Those big engines on it, they just purr.”

Coulson, who has deployed his Martin Mars team (including a tractor trailer used to haul maintenance and support equipment, and a crew of 14 to fly and maintain the Martin Mars around the clock) as far south as Mexico, said the giant flying boat tends to draw crowds.

“We really got an understanding of the airplane when we took it into southern California,” Coulson said, recalling a four-week assignment with the aircraft based at Lake Elsinore. Alerted of the Martin Mars’ impending arrival, about 1,000 people were on hand to greet Coulson and his team, many with stories about parents and grandparents who served on, or were served by the Mars in its U.S. Navy days as a flying hospital, bringing wounded soldiers home from Korea.

“They would bring out buses from old age homes,” Coulson said. “It was right out of the movies, it was wild.” 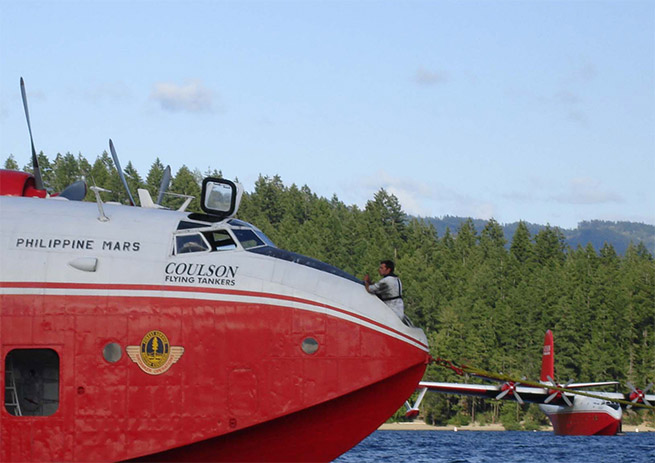 Coulson recalled one particular encounter, in 2009, when the crowd included an 84-year-old veteran who arrived with his family to see the aircraft that brought him home, badly wounded, from Korea. They waited, watching from shore, for hours until the wind shifted and spun the aircraft, bringing into view the window he had looked through during the daylong journey.

“When that airplane swung around, he started crying,” Coulson recalled. The veteran told his family that "'none of you would be here’” if not for that giant flying boat, able to accommodate dozens of wounded evacuees and medical staff. “It was just awesome to be part of that moment with that family.”

Coulson said stories like that make him feel good about the impending deal with the naval museum.

“When we look at Pensacola and what it stands for and the fact that those people would love that airplane … that’s why we just spent a ton of money to get that back serviceable, get it painted,” Coulson said.

‘It was a good tool’

Dev Salkeld, the senior Martin Mars captain for Coulson Flying Tankers, said flying the Mars is, in some respects, similar to flying other seaplanes or flying boats. The biggest difference, Salkeld said, is the logistics. For one thing, the Mars needs a lot of water to land on, and a lot of fuel and oil. Each of the four radial engines burns about two gallons of oil per hour, and a day of flying requires a drum and a half of oil for servicing. The Mars can be beached only with specialized gear, so in the field it is serviced on the water, from boats, the lumbering giant moored to an anchor weighing at least 8,500 pounds. The flight crews take care not to get too close to populated shorelines with boats tied to docks, since the Mars throws a heavy wake— particularly when fully loaded.

“If our wake is too close it could rip the cleats right out of the dock,” Salkeld noted in an email conversation. “When operating the Mars we try to have a ‘good neighbor policy’ so that we don't upset anyone. However there is no getting away from the fact that the Mars is loud.”

From a firefighter’s perspective, it is also on the slow side. Under ideal circumstances, with a suitable water source close to the fire, the Mars has been known to drop 130,000 gallons in a day, Coulson said—far surpassing the volume dispersed by typical water tankers. (Larger fixed-wing firefighting aircraft such as converted DC-10s are used to drop retardant ahead of the advancing fire, rather than directly attacking it with water.)

But the 165-knot maximum cruise speed can dramatically reduce the volume deployed if there’s a long distance to cover between the water source and the fire, Coward noted, and there are only so many lakes in California large enough to accommodate the Mars. Conflicts with recreational and other uses further limit the flexibility of the giant water tanker.

“I could see where it would work well if you had numerous water resources nearby,” Coward recalled of his own experience leading Mars attacks. “We had pretty long transit times from loading it to bringing it back to the fire.” 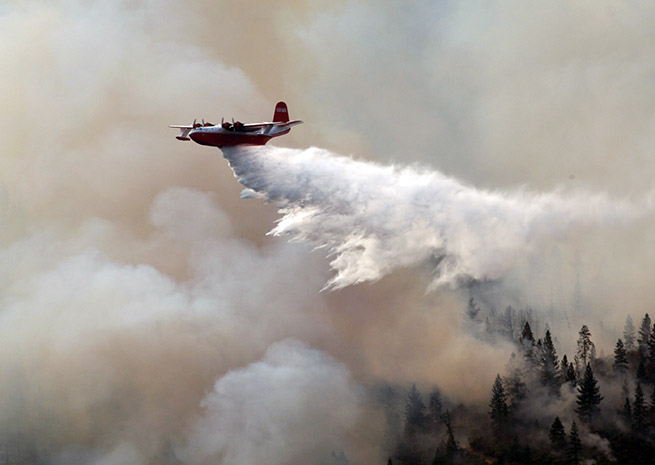 Cal Fire Division Chief Scott Upton, who served as the air tactical supervisor on a major Southern California fire in 2007, said the Mars proved its worth in some key situations, stopping a branch of the massive fire from turning a corner through a valley. (Coulson said controlled tests confirmed saturation rates that ranged up to 14 gallons on every 100 square feet.)

“It’s unique because it carries so much water,” Upton said. “Will it be missed? I think so. It was a good tool that I had, that we utilized. Unfortunately, [airplanes] don’t fly forever.”

Coulson has fought a losing battle against the march of time, updating the avionics and capabilities of the Mars (adding Garmin avionics and a system to disperse gel as well as foam, for example). He said the Mars is well-equipped to operate in crowded modern airspace, and has proved its particular abilities time and again, saving lives, homes, and natural resources from destruction.

“We have the biggest scooping aircraft in the world,” Coulson said. “The one thing I can’t defend is, it’s a 1940s-vintage aircraft. It’s always the age of the aircraft.”

Local officials in Port Alberni, British Columbia, where the Mars aircraft have been based since 2007, joined counterparts in the Alberni Valley lobbying for a renewal of the Mars contract. A letter writer responding to word of the impending demise of the 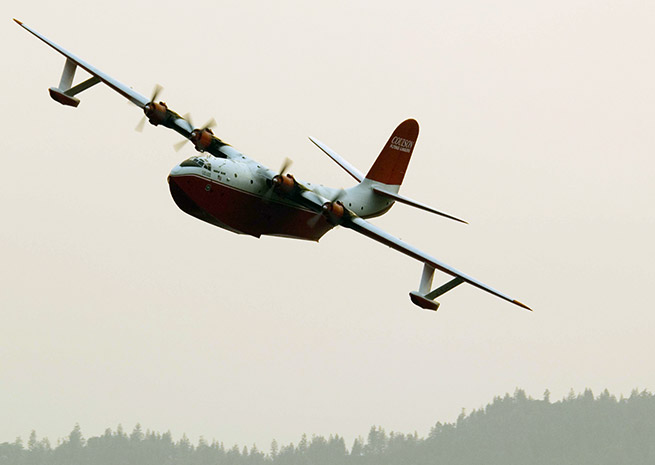 Mars in the Alberni Valley Times recalled his own experience feeling the ground shaken under his feet as a young firefighter, courtesy of a Mars water drop, and also recalled the crowd-pleasing demonstrations, calling the grounding an “emotional pinch for the people of Port Alberni.”

Salkeld agreed the Mars will be missed.

“Without a pending contract for next year it does indeed look like the Mars may be reaching the end of her commercial life,” Salkeld wrote. “It will be a sad time for many people including myself. I feel privileged to have flown it for the last five years.”