Get the app Get the app
Already a member? Please login below for an enhanced experience. Not a member? Join today
News & Media Pilots: Tom Davis 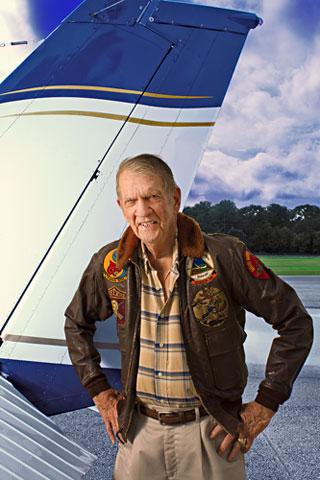 Thirty-three years of service in the United States Navy didn’t make Tom Davis wealthy or famous. But it did provide him with an excellent education and the experience necessary to fly fighters in combat—and command a jet training squadron of 85 aircraft, 80 flight instructors, 320 maintenance personnel, and 120 students.

Civilian life is considerably less intense, but at 85 years old Davis is as driven and focused as ever. His goal is to promote public awareness of the economic, recreational, and public safety benefits of community airports. Today, 35 years after leaving the military and taking up the charge for general aviation, he shows no signs of flagging. In fact, he’s just taken out a new 20-year lease as the FBO operator and manager of Crystal River Airport, on Florida’s Gulf Coast.

Davis has shepherded Crystal River from modest beginnings to become a destination with international appeal. Students come from all corners of the world to train with Davis and his CFIs. That wasn’t always the case, however.

“When I first got here there was nothing but two dirt runways and this big empty building,” Davis says, gesturing to the main structure on the field. Years of effort have led to successes, with slightly more than 4,500 feet of pavement on Runway 9/27, and one of the most aviation-centric FBO buildings you will ever see.

Dominating the FBO counter is a Corsair model with a wingspan of several feet. Davis searched high and low to find one with U.S. Navy markings. It is a fond reminder of one of the many aircraft he’s flown over the course of his career. The Corsair is not alone, however. The entire circumference of the FBO is festooned with model aircraft mounted where a more traditional designer might have put crown molding. From Davis’s office down one wall, around a hallway, and wrapping back to the coffee pot in the opposite corner are dozens of models with special meaning. “I have them all lined up in the order I flew them in the Navy,” Davis explains, pointing to one model after another. “I started with the Stearman, then went to SNJs—and, believe it or not, they put us in PBYs.”

His affection for the aircraft he flew and his enthusiasm for the future of the airport he loves so much are apparent. But Davis is careful to point out he is not alone in his quest to make the most of aviation in this alluring corner of the world. “There’s really two of us who made this place,” Davis says. “I don’t know how I would have done it without her.” The mention of his wife, Gudi, causes the retired Navy captain to swell with pride. She, too, is a designated pilot examiner rated in land and seaplanes. They are a team, with each supporting the other in business as well as in life.