Get the app Get the app
Already a member? Please login below for an enhanced experience. Not a member? Join today
News & Media Airframe: Seeing red 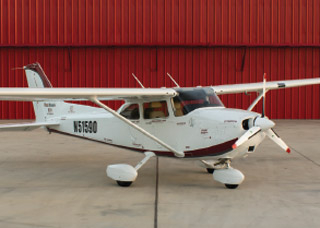 The Cessna Skycatcher has “no future,” says Cessna CEO Scott Ernest. A new Skyhawk costs more than $400,000. Diamond sales have slipped, and light sport isn’t catching on with students as expected. Other than Piper, which is seeing a surge in light aircraft sales, one could conclude that the market for flight training aircraft is more or less at rock bottom. Maybe that explains the big interest in a diesel-powered, remanufactured 172, an airplane that may not have been taken seriously a few years ago. But Redbird’s Redhawk is serious, and it could be the right airplane at the right time.

The Redhawk was introduced last year, but many details remained either unreleased or unknown. Now that Redbird has converted another 172, and has been using the airplanes in its training fleet for a few months, the project is starting to take shape.

The first question Redbird had to answer was what. What will it do with a 1970s or 1980s ramshackle airframe to make it a Redhawk? According to Redbird’s Roger Sharp, the work orders include new paint, interior, panel, engine, seats and seat rails, glass, control cables and pulleys, and even new rivets and hardware. The paint is simple and tasteful. The interior looks like a new airplane. Because it includes Cessna’s new 26-G seats and synthetic leather, there is virtually no difference between the Redhawk interior and a new 172’s.

Acknowledging that today’s students will be drawn to glass cockpits and need to learn them, Redbird opted for a dual Aspen primary flight display and multifunction display with a Garmin GTN 650 driving them. There will also be an S-Tec System Fifty Five X autopilot. One of the nice things about the Aspen is that the transition is virtually nonexistent, and some backup instruments are kept front and center. Students will be exposed to a cross-section of legacy and cutting-edge instrumentation.

Contintental’s Centurion 2.0 diesel replaces the original Lycoming 320-series engine. The Centurion 2.0 is a 135-horsepower turbo-diesel with dual full authority digital engine control that Continental purchased from the smoldering ruins of Thielert. What was a boutique European company with inconsistent quality and support is now under the umbrella of one of the world’s foremost engine manufacturers. The Centurion has always been considered a solid engine, but Continental’s support could make the difference in spreading diesel technology to the American masses. That’s especially true when you consider that if the Redhawk is successful, thousands of new pilots will train solely on diesel.

For the Redhawk experiment to work the business case has to be there, and Sharp says that so far, the numbers seem to add up. Although the Centurion currently has a 1,500-hour time to replacement—as opposed to the traditional overhaul—Sharp said the decreased maintenance costs (no 50-hour tasks, and a greatly reduced 100-hour inspection), and lower fuel burn of around 5 gallons an hour in training, pretty much make the engine swap a wash. If Continental can extend the replacement interval to 2,000 hours, the per-hour cost should be significantly less.

Paying for the airplane by the hour is one thing, buying it is another. Redbird says the airplane is expected to cost $249,000 “or less.” That seems like an odd turn of phrase for an airplane price quote, but when you consider the reduced cost possible with a customer-provided donor airframe and some learned manufacturing efficiencies over time, it makes sense. Buying the airplane outright may be the worst thing a flight training provider can do, however. That’s because Redbird is teaming up with Starr Aviation Agency and Brown Aviation Lease to offer a unique leasing program. Essentially, flight training providers will opt in to a group, with an initiation fee that’s promised to be low. Schools then pay per hour of use, which includes everything but fuel. If things get slow, the school can simply give back the airplane without penalty. When the school is jamming, it orders more and keeps paying that same per-hour rate.

There’s great anticipation about such a program because access to capital continues to seriously plague the flight training industry. This would negate that obstacle, while guaranteeing a healthy profit margin and reducing any risk of a local lease owner pulling out at will.

Sharp seems to think the aircraft’s ease of operation will appeal to students. It’s hard to argue. Dual FADEC makes for incredibly simple engine operation. Run-up involves holding the buttons to let the computer check everything. There’s no leaning, setting the propeller, or anything else that pilots constantly have to worry about. There’s just one lever—a gas pedal for your hand. The diesel does hit the useful load for 100 pounds, but that still leaves room for fuel and a big student and instructor. Given that it’s being marketed strictly as a training airplane, it shouldn’t be an issue.

It’s hard to imagine the Redhawk not catching on. Redbird has a swagger often seen in aviation but rarely delivered upon. If Redbird’s airplane project is as successful as its simulators have been, the next generation of pilots will be learning in Skyhawks turned red.