Get the app Get the app
AOPA will be closed July 4th, in observance of the Independence Day holiday. We will reopen at 8:30 am ET on Tuesday, July 5.
News & Media Avionics: L-3 Trilogy - Quietly capable

An electronic lifeline ready for when you need it

The weak link in most glass cockpits—whether new from the factory or aftermarket—is system redundancy. 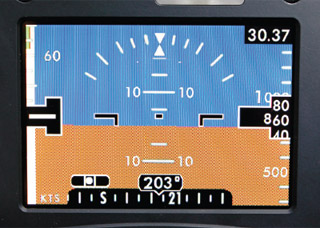 The weak link in most glass cockpits—whether new from the factory or aftermarket—is system redundancy. What do you do when the power goes out or a display fails? For most, it means reverting to backup mechanical instruments. In legacy aircraft, at least one of those is frequently driven by a vacuum pump—another weak link. And those mechanical backups take up panel real estate that is often in short supply.

L-3 Avionics Systems is among the companies offering a compelling one-stop solution to replace all of the mechanical instruments with a reliable solid-state electronic system that can include a battery backup for use when the main displays go dark. And, depending on your model of airplane, you can also unload the balky vacuum pump as well, saving weight, complexity, and maintenance.

As part of the recent glass cockpit upgrade in my 40-year-old Beech Bonanza A36, I removed the pneumatic pump and mechanical flight instruments and installed an L-3 Trilogy Electronic Standby Instrument. The only conventional flight instrument left is the turn coordinator, necessary for the S-Tec 50 autopilot.

Since I don’t have a backup alternator, I chose the ESI 2000, the Trilogy model with the battery backup. The lithium ion battery adds less than a third of a pound to the unit’s base weight of 2.2 pounds and promises to provide more than an hour of power to get you out of the clouds and on the ground should the primary displays fail at the worst possible time. I also chose the optional MAG 3100 heading system, which, at $5,480 is admittedly a bit of a Cadillac feature when I already have heading information available from two GPSs on board. A more common setup is a connection to a GPS for heading information. However, failure of that GPS means a loss of heading to the L–3.

In a bad situation, the Trilogy’s bright LED is a familiar friend, combining airspeed, altitude, attitude, slip/skid—and, optionally, heading in a format that looks much like what you just lost in the primary displays. The airspeed and altitude tapes could be right off of a Garmin or Aspen display. The airspeed tape even includes V-speed color bands unique to your model. The pitch ladder on the attitude indicator helps nail climb and descent profiles.

Most important, the Trilogy is simple to use. The last thing you need in a busy cockpit is more button pushing, especially when things go bad. Four buttons across the bottom of the display control all functions. However, in flight, the only ones you normally need are the two on the right—the plus and minus, which change the barometric setting. Bump the setting up or down to keep the altimeter in sync with the primary altimeter. When the optional battery is active, a battery status indicator displays in the upper left. With the heading system installed, a horizontal heading tape spreads across the bottom of the display, moving the slip/skid indicator to the left.

When the power goes out, the battery automatically takes over and you simply begin using the Trilogy for primary information. As with other systems, it’s important to practice for such eventualities. During a recent instrument proficiency flight, I had my safety pilot pull the circuit breakers on the Garmin G500 primary flight and multifunction displays while I flew under the hood. With an instrument approach loaded in the number two navigator, a Garmin GNS 530W, I easily glanced back and forth between the mechanical course deviation indicator and the Trilogy to fly an entire approach and missed approach with no significant problems. Climbs, descents, and turns were intuitive. With the heading system, there was no need to look at the 530W to determine heading, a move which would have required a significant bit of head movement—not a good thing in instrument conditions.

Learning to use all the gear in a newly upgraded panel presents its own challenges. Thankfully, the Trilogy quietly soldiers on, a lifeline ready for when you need it.