Get the app Get the app
AOPA Members DO more LEARN more SAVE more - Get MORE out of being a pilot - CLICK HERE
News & Media Wx Watch: FIKI insights

What you may not know about known-ice certification

There he goes—out the door, onto the ramp, and into his airplane. 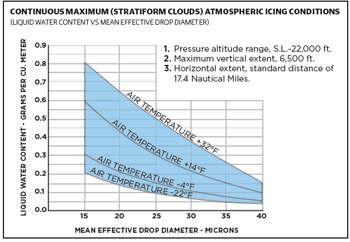 There he goes—out the door, onto the ramp, and into his airplane. Yes, he’s had a weather briefing, and yes, it did mention icing—in both airmets and pireps. He even went online to check the current and forecast icing potentials (CIP and FIP, respectively) on the icing tab of the Aviation Digital Data Service (ADDS) website (www.aviationweather.gov), in the Supplementary Icing Information field. There, the pilot saw that a better than 50-percent chance of icing conditions could exist along his proposed altitude and route of flight. Still, he picks up a clearance and launches. He’s even a bit smug. After all, his airplane is certified for flight into known icing—FIKI, for short.

Does this mean the airplane is safe to fly in icing conditions? Yes and no. Yes, if the pilot considers the ice-protection equipment as escape tools to be used as a means of exiting icing conditions as soon as they are encountered, or if only small or “not-so-bad” amounts of ice accrete. No, if the pilot carries on as though the airplane were invincible in the face of any and all forms of icing.

It’s been said before, but it bears repeating: FIKI-certified or not, airplanes cannot drone on indefinitely with heavier ice buildups. Eventually drag will increase, lift will decrease, and handling characteristics will degrade. Making all this more complex is the fact that all these negatives vary from airplane to airplane. For example, wings with larger leading-edge radiuses (think Piper Aztec) are less efficient as ice collectors than wings with smaller radiuses (think Mooneys)—but lift erosion still takes place, just at different rates.

True, flight tests for FIKI certification are conducted to ensure that ice-protection systems do their jobs within test parameters—but those don’t include all icing possibilities. They do include tests of ice accretions and their effects on wings and other sections of an airplane in an icing wind tunnel; flights with ice shapes attached to leading edges; and, finally, flights in actual icing conditions. If the airplane passes, then FIKI is granted. The tests in actual icing are a process that can take a long time, by the way, which explains why icing certification often is the last test program in a new airplane’s certification process. Delays happen when there are difficulties finding the correct, FAA-prescribed icing conditions.

FAR Part 25, Appendix C sets down the certification parameters for flight tests in actual icing conditions. The parameters include temperature, water droplet diameter, and liquid water content (the amount of liquid water in a cloud mass, expressed in grams per cubic meter). There are two envelopes, one for what’s called continuous maximum icing conditions (this corresponds to the conditions that are typically prevalent in stratus clouds), and another for intermittent maximum conditions (corresponding to typical icing associated with cumulus clouds). 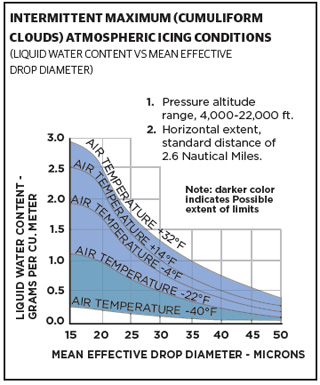 For the stratus cloud tests, liquid water contents are lower, as well as droplet diameters—just what you might expect in rime-ice-producing stratiform clouds. For the cumulus-cloud envelope, droplet diameters and liquid water contents are larger. But here’s something more interesting: the durations test pilots need to fly are scaled to match standardized distances with worst-case icing situations—lasting 17.4 nm in the stratus tests, and a mere 2.6 nm in the cumulus tests.

Icing certification is a complicated subject, and there are tables that factor in smaller liquid water contents for distances as far as 310 and 5 nm for stratus and cumulus conditions, respectively. Plus, several flight tests must be conducted so that a representative sample of data points within each envelope can be collected. And many test points may require flights much longer than 17.4 or 2.6 nm. Some tests, such as those of TKS and other glycol-based systems, require that the aircraft stay in icing for the equivalent of 45 minutes to prove that the system can perform well for the duration.

Is this the closest we can come to duplicating what we’ll really experience during our real-world flights? The tests are designed around envelopes and standards established in the late 1940s and early 1950s. While reliable, much research has been conducted since then, and we know more about this often mysterious subject. It’s also worth noting that airplanes going for FIKI certification need not fly in freezing rain—or the freezing drizzle icing conditions that felled an American Eagle ATR–72 in October 1994, or the suspected ice crystal conditions that may have played a part in engine stoppages affecting several airliners. However, 2014 may well bring a much-needed change in the icing envelopes and certification rules that include large-droplet icing conditions.

All of this illustrates why compliance with today’s FIKI rules is no guarantee of safe, extended flight in more serious icing conditions. As for retrofit ice protection equipment—such as wing and propeller boots, or heated windshield plates—installed under supplemental type certificates (STCs), none of it need comply with any tests in actual or simulated icing conditions.

So you’re picking up ice

Let’s say everything has gone wrong and now you’re icing up. This is no time to blame a bad forecast or a lousy go/no-go decision. It’s time to take action. Right now.