Yacht in the air

A big seabird with a lot of soul 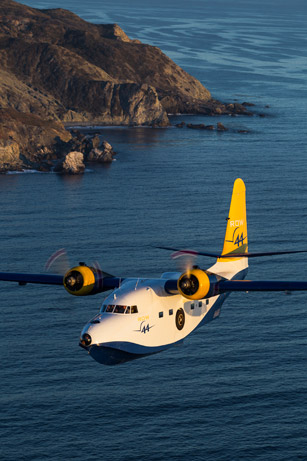 There’s a good chance you’ve used Row 44’s satellite-based, in-flight Wi-Fi system as an airline passenger. It’s much less likely, however, that you know how a vintage Grumman HU–16B Albatross—delivered in 1952—helped to develop this decidedly modern technology.

In 2004, Gregg Fialcowitz was disappointed and frustrated by the lack of Internet availability during his frequent airline travel. He thought that sitting on a jetliner for hours on end without Wi-Fi was an incredible waste of time. Being in the satellite television business and working with Hughes Network Systems and DIRECTV, he believed that the Hughes satellites could be used to provide in-flight broadband service. He teamed with John Guidon, a talented electronics engineer, to develop such a system.

Guidon recalls sitting as a cramped passenger in row 44 of a Douglas DC–10. He had been jammed into a small seat amid the crush of other small seats, next to the aft lavatories and directly beneath the noisy center engine—a mostly unpleasant experience. He, too, recognized how much more productive and entertained he could have been had broadband service been available during that and other flights.

As technology entrepreneurs, Fialcowitz and Guidon believed that they could do something about that and formed a company called Row 44. Enter David Cummings, a corporate pilot who had been flying and maintaining a Howard 500 and had previously restored a Grumman HU–16B Albatross from the ground up. He had heard that Row 44 needed an airplane to test its satellite Internet system. An airplane such as a Beech King Air wasn’t large enough and something like a Boeing 737 would be prohibitively expensive. Cummings approached Row 44 and suggested that it consider an Albatross, the amphibious flying boat that had gained fame in military search-and-rescue operations during the Korean and Vietnam wars.

The Albatross was relatively inexpensive; it had almost the same upper-fuselage radius as a Boeing 737 and could accommodate a large pod (radome) containing satellite antennae intended for use on the Boeing; it could carry the necessary engineers and research equipment; it wasn’t pressurized, so no pressure vessel had to be punctured to mount exterior equipment; and the piston-powered airplane vibrated in a way that tested equipment like no turbine aircraft could. Finally, the Albatross was an extraordinarily rugged machine, as were all of the airplanes built by the “Grumman Ironworks,” a nickname give to the Grumman Aircraft Engineering Corporation because of its reputation for building tough, durable amphibians such as the Goose, Mallard, and Widgeon. 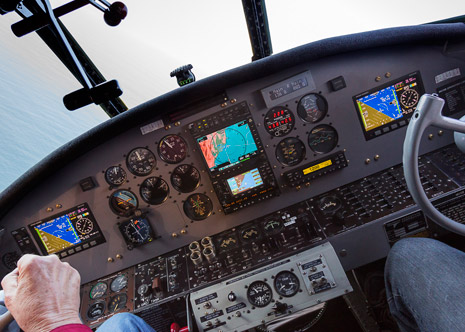 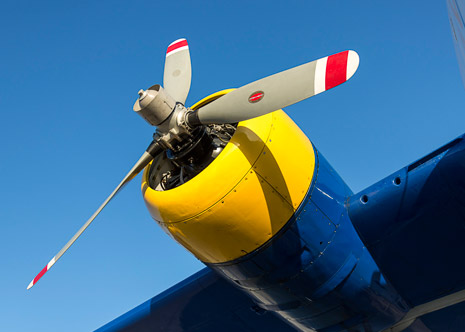 Row 44 agreed with Cummings and purchased an Albatross as its flying testbed. N44HQ had originally been delivered to the Air Force in 1952 as a search-and-rescue aircraft. It was decommissioned in 1971 and stored at the Davis-Monthan Air Force Base “boneyard” near Tucson, Arizona, until itself being rescued and restored by Dennis Beuhn of Carson City, Nevada, during the late 1980s. Cummings became Row 44’s chief pilot and further modified the airplane. 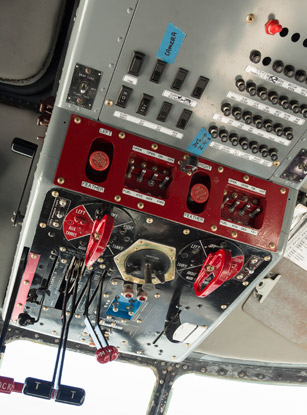 The Albatross serves Row 44 well by facilitating development of what is now the world’s most widely deployed satellite-based, in-flight Wi-Fi system. Fialcowitz points out that the company’s Internet system is superior to that provided by ground stations because it has far more bandwidth and is available when aircraft are beyond the range of ground transmitters. Row 44’s system is used by Southwest Airlines and a host of other carriers. While the use of aircraft to develop in-flight Wi-Fi is relatively new, airplanes have been used for rescue at sea since 1940, when German and British pilots went down in the English Channel during the Battle of Britain. The Grumman Albatross was introduced in 1949 as a replacement for the aging Consolidated PBY and was used by the U.S. Air Force, Navy, and Coast Guard. Servicemen referred endearingly to the aircraft as Slobbering Albert, the Goat, Dumbo, and Clipper Duck.

The Albatross is a big airplane, a slab-sided amphibian with a lengthy and deep-V hull for open-sea operations. Like most seaplanes, it has high wings to keep engines and propellers well above the water. The propeller tips clear the ground by eight feet, which means that you can walk beneath them with the engines running—a really weird experience. Although unnecessary, you cannot help but duck. The tips clear the water by four feet. Each of the two nine-cylinder Wright R-1820 Cyclone engines produce 1,425 horsepower and are essentially the same as those used on the Boeing B–17 Flying Fortress.

Normal entry is made by hoisting yourself up a boarding ladder and stepping through a hatch on the left side of the rear fuselage. When flying an Albatross, by the way, one becomes accustomed to using nautical terms. It is, after all, a boat. Ropes are called lines, the nose is the bow, the rear of the aircraft is the stern, and so forth. Once inside, you can turn right and go aft through another hatch that leads into a voluminous tail compartment. Turn left and you are led forward through the cavernous cabin to a spacious flight deck. From there, you can duck under the instrument panel and through a crawlspace into the bow compartment. There you are treated to a fabulous, bird’s-eye view of the outside world through this Albatross’ Plexiglas nose dome, which replaces the original radome.

Cummings graciously invited me to take the left seat during my instructional flight. He has extraordinary experience with big radial engines and knows how to make them sing, so I was grateful when he volunteered to start them. As on many seaplanes, engine controls are mounted on the cockpit ceiling between the pilots’ seats, a configuration that simplifies routing cables and linkages to the engines. Taxiing requires differential braking to steer the castoring nosewheel. Recovery from a taxiing turn, especially a tight one, is facilitated by adding a tad of power from the inside engine when about 45 degrees of turn from the desired heading. 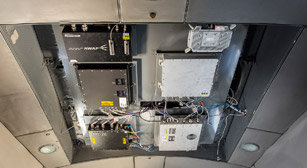 The Albatross yaws noticeably left during the initial part of the takeoff roll. This is easily countered by advancing the left throttle slightly ahead of the right. As airspeed increases and the rudder bites the air more effectively, maximum power (51.5 inches of supercharged manifold pressure and 2,700 rpm) can be commanded by both throttles. Noise-cancelling headsets are a must. Cockpit visibility is quite good, a requirement for search-and-rescue operations.

The nose is rotated at 85 knots and then lowered after liftoff to accelerate the Grumman to 105 knots, the best single-engine climb speed (VYSE). Minimum controllable airspeed following an engine failure (VMC) is 92 knots. The rudder is hydraulically boosted during takeoff and landing to lend a helping foot in case of a low-speed engine failure.

Because of the manner in which hydraulic plumbing is routed, the landing-gear legs retract irregularly. The nosewheel retracts first, followed by each of the tall main-gear struts—but not in unison. One leg retracts into the side of the fuselage faster than the other, resulting in asymmetrical drag that yaws the airplane slightly right or left during retraction and extension cycles. The split flaps also are hydraulic.

Trim is provided about all three axes using spring-loaded toggle switches. There is a trim tab on each elevator that is operated by its own toggle switch. Cummings advised me to engage both elevator-tab switches simultaneously to prevent unequal elevator forces from developing. The cowl flaps also operate electrically. 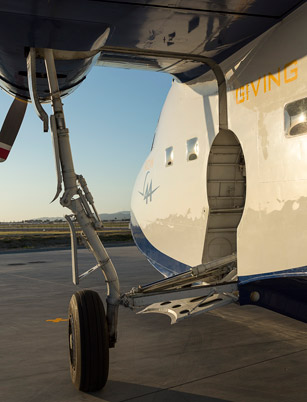 The airplane does not have a stall-warning indicator, nor does it need one. Ample airframe buffeting occurs five to 10 knots before the break. Although rolling moments during a stall can be strong, recovery is conventional.

The throttles are pulled aft to idle the engines at touchdown. You then push up on the throttle handles with the palm of your right hand. This moves the throttles into a detent that electrically activates and hydraulically positions the 11-foot Hamilton Standard propellers into reverse pitch. The throttles then can be pulled farther aft to create additional reverse thrust for braking. Reversing, however, is most valuable for steering the big boat on the water. Unlike single-engine seaplanes—and like most other multiengine seaplanes—the Albatross does not have a water rudder. By using the throttles differentially (moving one aft and the other forward) with one propeller in reverse and the other in forward pitch, the Albatross can pivot on a dime. With both propellers in reverse, you can drive the aircraft backwards. 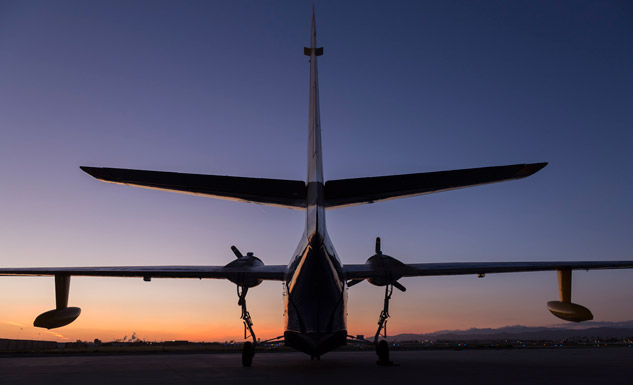 Unfortunately, I did not have a chance to operate the Albatross as a seaplane because the only convenient body of water during our flight was the Pacific Ocean. Cummings doesn’t like to operate the airplane in salt water because of the added cleaning and maintenance this requires.

The Albatross, though, has a well-earned reputation for being eminently seaworthy, designed to withstand the punishing forces associated with operating in six-foot waves and 10-foot swells. In 1956, an Albatross was landed in 15-foot waves to rescue a downed airman. A takeoff would have been impossible in these horrific conditions, so the pilot taxied his aircraft 100 miles to Okinawa.

In the air, however, the HU–16 can go much farther. The primary fuel system consists of two 340-gallon wing tanks, and the wingtip floats are auxiliary fuel tanks, each holding more than 200 gallons. (Fuel in the floats should be consumed before a water landing to prevent the possibility of fuel imbalance and to avoid damaging loads that could occur with heavy floats when landing in rough seas.) Military versions of the Albatross were equipped with drop tanks that gave the airplane a range of 2,600 nm and an endurance of more than 20 hours. This made the airplane well-suited for search-and-rescue operations, not to mention submarine hunting and other long-range missions.

The Albatross could be refueled at sea from a seaplane tender or barge. It also could be configured as a triphibian, meaning that you had the choice of operating it from land, sea, snow or ice.

Production of the Albatross ended in 1961 after 466 had been built. During the late 1970s, Grumman purchased back 57 surplus HU–16Bs with the intent of converting them into 28-seat commuter airliners. It was intended that these aircraft, designated as G–111s, would become the amphibious equivalent of the Douglas DC–3. But the demand never materialized, and only 13 were produced. Twelve were operated by Chalk’s International Airline and carried passengers between Florida and the Bahamas. The remaining airplane was sold to Conoco Oil. Chalk’s operation was downsized during the mid-1980s to Grumman Mallards, and airline use of the G-111 came to an end.

Today there are 26 of these ex-military warriors flying privately. An additional 20 are in storage—some flyable, some not. Many of these flying yachts and their proud owners gather at a splash-in held annually at Boulder City, Nevada, and on nearby Lake Mead.

Additional information about the Grumman Albatross can be found online (www.hu-16.com).

Extra: The Wright R-1820 Cyclone engines are essentially the same as those used on the Boeing B–17 Flying Fortress.

Barry Schiff has been an aviation media consultant and technical advisor for motion pictures for more than 40 years. He is chairman of the AOPA Foundation Legacy Society.
Go to Barry Schiff's Profile
Topics: Aircraft, U.S. Travel, Travel