Get the app Get the app
Already a member? Please login below for an enhanced experience. Not a member? Join today
News & Media Rome by air

Flying over the Vatican, Colosseum, Roman Forum, and Appian Way at 3,000 feet offers a view of Rome few—including pilots—can experience. Andrea D’Orazio, a flight instructor at Urbe Airport just outside of Rome, had arranged prior approval to shoot the ILS 15 into Ciampino Airfield on the southern side of the city and fly directly over the historic structures that are surrounded by restricted airspace. Looking down on Rome from the air, one could almost picture the city as it would have been during the Roman Empire. Many ancient structures are still standing thousands of years later, and the layout of city roads show how advanced the Roman Empire was.

While the views are worth it, flying (or learning to fly) in Italy is not easy or cheap. Meeting with the AOPA-Italy delegation and officials from UrbeAero, a flight school and Diamond Aircraft distributor, at Urbe Airport 30 kilometers north of Rome provided the opportunity to discuss flying and the GA environment in Italy as well as the country’s training practices. 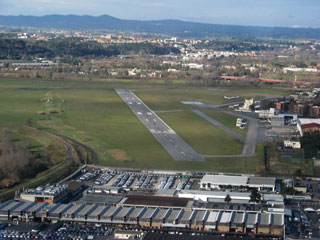 Approach to Urbe Airport, a former military base that is now a general aviation facility with a 3,000-foot runway and control tower but no instrument approaches.

Rental costs for the Diamond DA40 flight over Rome were 335 euros for an hour of flying, or approximately $446, more than double the U.S. rate of about $200 an hour. Fuel is also more expensive: 100LL runs $15.97 per gallon because of taxes. All airports in Italy have landing fees. At Urbe Airport, a former military base that is now a general aviation facility with a 3,000-foot runway and control tower but no instrument approaches, the landing fee is 32.6 euros, but other airports have landing fees as high as 100 euros. There are no ATC or approach fees for aircraft less than two tons; however, any aircraft heavier than that have additional fees. The GA community in Italy is very small due to those high costs, D’Orazio said.

According to D’Orazio, most students complete their training in 30 hours. Using a Diamond DA20 to do so would cost between 8,000 euros and 12,000 euros ($10,656 to $13,320). The majority of his students are working toward their commercial certificate to pursue a career, with only a small number flying for pleasure. Those who do fly for pleasure can’t afford to fly often because of the cost of ownership (taxes range from 1,500 euros to 2,400 euros per year). Those who are lucky enough to be members of a flying club can fly much cheaper.

The cost of flight training is all out of pocket in Italy--there are no university programs, grants, or scholarships, severely limiting the number of people who can pursue flying. Students who want to fly for the airlines can get their commercial certificate in as few as 200 hours; however, in Italy the applicant must pay for his or her own type rating--as much as 70,000 euros with no job guarantee.

U.S.-certificated pilots can fly in the country after a checkout with an instructor as long as the aircraft they are flying is U.S. registered. To get checked out in an Italian aircraft, the process is similar to what a foreign pilot must do to fly in the United States: some paperwork to verify current medical and pilot certificate, and then a checkride with an Italian examiner. Flying in Italy is similar to the United States, with most of the same regulations, runway markings, and approach plate and chart symbols, as you would expect in an ICAO country. Other than the fact that airport names are in Italian and Rome has Class A airspace from the surface up to 35,000 feet, U.S. pilots will feel like they are flying at home—well, except for the breathtaking view of the ancient ruins.