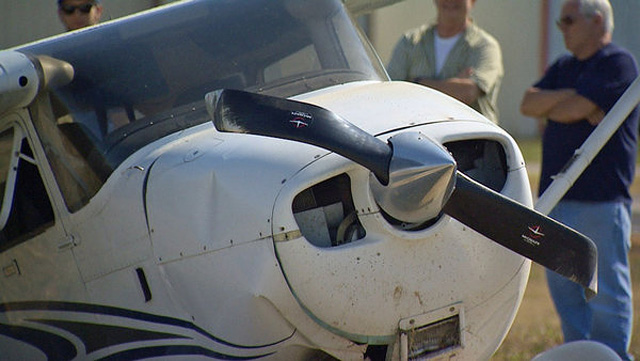 In early November 2012, then-student pilot Will Davis’s first solo cross-country went viral around the world after his wife’s video showed him clipping an SUV as he landed a Cessna 172 at Northwest Regional, a privately owned, public-use airport in Roanoke, Texas.

“I had soloed three times prior. I was feeling great about doing my first cross-country solo. It was my first time out of the practice area, and it was wonderful,” Davis said. “I was flying back from Possum Kingdom Airport, which was beautiful and I was looking forward to the landing. Everything was normal and the winds were calm. But when I hit the SUV, that’s when everything unraveled.”

Davis said he did not see the SUV, because he was focused on the runway at the time. “You know how high the dashboard is. There’s a road that turns left in front of the runway,” Davis said. Heinrich Steffen, Davis’s instructor, said Airport Road is only five or six feet away from the runway, which is very close. He also noted that the stop sign painted on Airport Road is about 100 feet from the runway.

“When I was at the position where the SUV came into the landing path, I couldn’t see it because the aircraft was blocking my vision,” Davis said. “I thought I had hit a fence. The felt impact from hitting the SUV was not that great.”

It wasn't that difficult to keep control of the aircraft, said Davis. “The plane did not try to veer off course until the wheels hit the ground,” he recalled. “Once I landed, the plane was out of control. It skidded for a while down the runway and eventually off the side of the runway in a grassy area.”

In fact, said Davis, he didn’t know that he had hit anything substantial. After he got out of the aircraft, he said, “someone came over and said I hit an SUV.

“It’s not clear in the video, but you’re coming in down a hill, then you’re right at the end of the runway, where you level off and flare,” said Davis. “That hill also blocks your vision.” 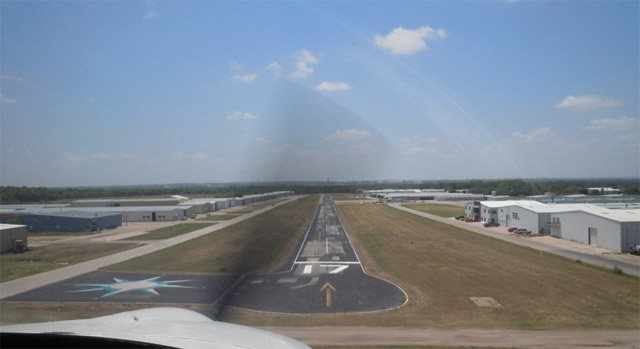 The road is only feet from the end of Runway 17, which has a displaced threshold of about 30 feet.

The resulting media firestorm was a difficult time, said Davis. “I had media coming to my house and calling me on my cellphone, which I had to turn off,” he said. “I didn’t want to be associated with an incident like that. I’m a low-key person. I don’t like all that attention and it was horrendous.” He spoke to both the FAA and the National Transportation Safety Board about the incident.

In interviews immediately after the incident, Davis said that he didn’t want to learn to fly anymore.

“And it was true at the time, but that interview happened the day after the crash. I felt low and hadn’t had a chance to talk to anyone about what happened,” said Davis. “But after the shock wore off, I realized that I still had a passion to fly. It was my childhood dream.”

About a month after the incident, Davis went flying with his instructor. “I was a little nervous at first. I kept thinking ‘I’ve got to land this thing.’ I felt nervous about the landings, and that’s where my flight instructor came in,” he said. “He coached me through the landing and made sure I was doing things properly. Once I got my feel for it, everything was fine and I felt good. After my second flight, I got my confidence back and I was OK after that.”

Steffen said the main thing he did was try not to emphasize what happened after the incident. “For him to come back was a big deal. I wanted to get him back into the joys of flying and focus on the safety aspect,” he recalled. “We spent a lot of time [on] landings. His flying was impeccable, but coming back into the pattern, then he’d get nervous.”

So Steffen had Davis land at different airports in the area, and then do it at Northwest Regional to bring back his confidence. “We spent a good five hours on landings to get his confidence back up,” he said.

On Feb. 2, Davis, an AOPA member, took his checkride and got his certificate. During the checkride, the examiner brought up the incident, he said, but did not ask any questions directly related to the accident. “He asked me some questions about night vision, keeping my eyes outside of the cockpit as much as possible, and watching for traffic.

“It felt like New Year’s Eve and Christmas all in one. It felt great,” Davis said of passing his checkride. “It was the fruition of a childhood dream. I’ve always wanted to learn to fly.”

Steffen said his reason for encouraging Davis to resume his flight lessons was what he saw in his student. “I can see in people when there’s an absolute passion for flying, and I saw the joy and freedom in Will. I had to stay away from flying for year. I felt it and I didn’t want anyone else to experience that,” he said. “I wanted Will to finish what he set out to do. I didn’t want him to lose that love just because of one accident. I also wanted to show him and his family that aviation is safe and that there’s nothing to fear about it.”

Davis ended by offering advice to student pilots about persevering with their own training. “You started taking lessons for a reason. Don’t let an accident or anything deter you from your dream. If you quit now, you may not do it again,” he said. “All risks can be mitigated with proper training. I’m so glad that my wife, my instructor, and other pilots encouraged me to continue. I look forward to meeting new people and seeing new places because of flying.”