Get the app Get the app
Get the latest news on coronavirus impacts on general aviation, including what AOPA is doing to protect GA, event cancellations, advice for pilots to protect themselves, and more. Read More
Already a member? Please login below for an enhanced experience. Not a member? Join today
News & Videos At home in the kingdom

The deep growl of the Cessna Stationair’s Continental IO-520 engine resonated in the afternoon air. Some of the village folks who had come to say goodbye covered their ears as it roared down the runway; most of the kids grinned at its deafening departure. Dwayne King, founder of Kingdom Air Corps, had the heavy hauler in the air less than halfway down the runway, and wagged its wings at the waving crowd below.

He would miss the teens he had just flown home to Anaktuvuk Pass (AKP) from a week of camp in the Brooks Range. They watched until the Cessna’s rumble faded as the airplane followed the John River around Kollutuk Mountain on its way back to Brooks Range Bible Camp, Kingdom Air Corps’ aviation-themed youth camp in the middle of the mountains. It was built for the children and teens living in the remote villages north of the Arctic Circle. There is no road in—arrival is by aircraft only, or by snow machine in subzero weather for those who dare. Staff, pilots, and flight instructors spend two summer weeks with the kids; during the first week, King, the chief pilot, handed out AOPA First Flight Certificates to the 8- to 12-year-olds, and in week two, he signed the logbooks of eager student pilots in the teen camp.

The camps are a blend of aviation and gospel, sports and study that have been an integral part of village summers since the 1970s. Started by pilots Dave and Tam Ketcher from Bettles, Alaska, the camps began as rafting trips from the villages of Allakaket, Alatna, and Anaktuvuk Pass to Bettles—down the Koyukuk or John rivers, followed by flights back home. Over the years, others caught the vision and expanded it, building one campground, then another.

In early 2012, brothers Matt and Tim Fickus—who had attended the camp as kids—offered their property and use of a 2,200-foot airstrip as a site for Kingdom Air Corps to build a new camp. Over the winter, at 30 degrees below zero, volunteers trucked building supplies and equipment up the Dalton Highway to Coldfoot, leaving the large and heavy items there until spring when they could be flown to the camp location. The smaller, more easily transported items were pulled in sleds across the ice by snow machines to the remote property.

During the weeks preceding the camp’s opening day, pilots flew in two Cessna 206s packed with additional building supplies and food. Charitable organization Samaritan’s Purse helped move the large items from Coldfoot to the camp with its CASA C–212-200, a heavy hauler whose fuselage carried stacks of 20-foot lumber and a 5,000-pound tractor. Volunteers worked around the clock to clear the land; build the 36-by 24-foot camp lodge and kitchen, and several wall tent decks with frames for bunk beds in each; outhouses; various storage sheds; and an ingenious creek-fed shower house.

An aviation theme permeates the new camp. The path through the woods is Sky Lane, and the campers’ tents are named Champ, Cub, Skyhawk, and Stationaire. All the kids love to fly, and some are focused—and gifted—student pilots. 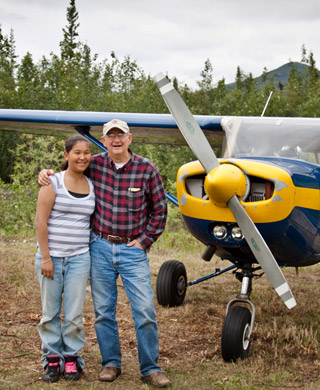 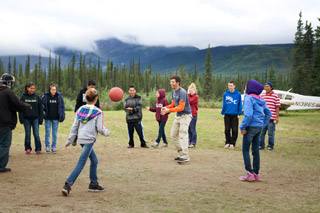 Flying in the kingdom

The camp is one of several outreaches of Kingdom Air Corps, whose focus is to train missionary pilots and aviation mechanics for real-world bush operations. In July, LeTourneau University A&P students and instructors were busy in the hangar at the Corps’ base of operations, King Ranch (AK59) in Chickaloon, Alaska, northeast of Palmer. Heads down and hands dirty, they were in the middle of a class, taught on site by professors Matt Poelman and Dave Scroggins, which requires 60 hours of hands-on maintenance.

Kingdom Air Corps’ flying focus includes a few fortunate students: Last summer, Simon, an aspiring pilot, soloed there; his accomplishment was followed by a shirttail-cutting celebration. Pilots with advanced ratings, as well as private pilots with the required experience and endorsements, flew a parade of aircraft from King Ranch to Fairbanks, then on past the Arctic Circle to the private grass strip where the camp is located. They also flew campers back and forth from their villages, allowing them to gain some of the real-world aviation experience they came for.

King’s aviation aspirations extend beyond Alaska—across the Bering Strait to Russia, where he and his wife, Carolyn, served as missionaries for several years in the 1990s. One of King’s friends, a Russian physicist and aviation enthusiast, Kostya, subsequently spent several summers at Kingdom Air Corps learning to fly. He currently is working on his instrument rating, hoping to one day see general aviation prosper in Russia.

Each year the organization hosts visitors and a staff of volunteers from all over the world between April and September. In 2012 the kitchen crew served more than 7,500 meals to people who came to build, fly, teach, or learn. Seats around the tables were filled with Japanese, Inupiat Eskimos, Athabascan Indians, Russians, and Americans from nearly every state and heritage. One day visitors from Scotland and England, who had seen the signpost while driving down the Glenn Highway, stopped in to see the airplanes. They were, of course, invited to stay for dinner. 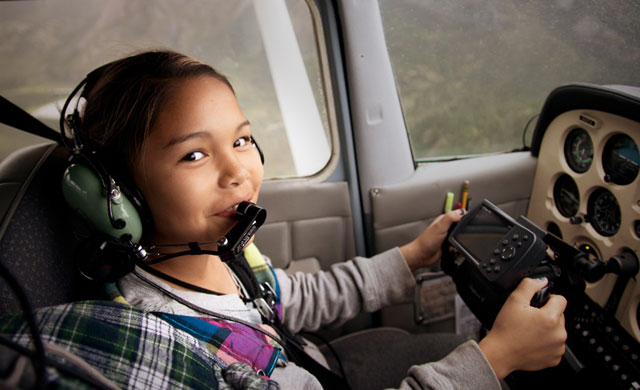 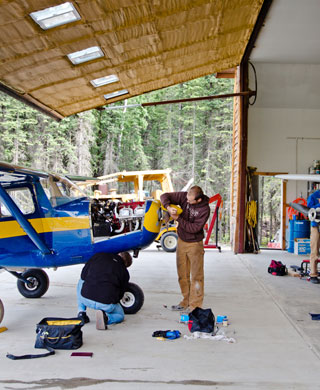 On a typical day, after breakfast, staff meeting, and prayer, pilots kick off the morning with sightseeing flights skirting the Chugach Mountains, dazzling passengers with the nearby Matanuska Glacier. The A&Ps hustle to the hangar to continue restoring an orange Cessna 170; the fuselage of a show-quality Luscombe donated by Fred Greening to Kingdom Air Corps last spring is huddled near its wing tip. The Luscombe had been disassembled and trucked to Alaska and is waiting its turn for reassembly. All but one of the organization’s aircraft were donated over the years by pilots who want to see their airplanes used in mission work.

Bill Johnson’s Piper Aztec, generously given in 2011, led the fleet that transported summer staff and supplies from King Ranch to the camp north of the Arctic Circle, and then flew native kids back and forth from their villages. With a dozen different aircraft and pilots to fly them, hundreds of volunteer staff, and thousands of supporters, Kingdom Air Corps is flourishing

Flying is one of the highlights of the weeklong camp. 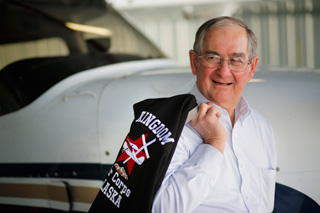 Truckers on the Dalton Highway north of Fairbanks, Alaska, sometimes hear the “Faster Pastor” flying overhead, a call sign Dwayne King earned for routinely beating truckers to their arctic destinations. King, a missionary bush pilot, wags his wings at the rigs below. Most of King’s 15,000-plus hours of flight time have been logged in Alaska, navigating the Talkeetna and Chugach mountains and the Brooks and Alaska ranges. He knows every creek and can name mountain peaks 100 miles away. King is a passionate aviator, but he loves the people who live in the Alaskan bush even more. He’s spent his life ministering in remote areas where there are no roads, bringing in food, supplies, encouragement, and good news. Although it’s not unusual in rural Alaska for half the village to turn out to greet an arriving airplane, it’s not handshakes and nods for King—he gets hugs and wide smiles. All over the state, he’s loved as if he were family.

A graduate of LeTourneau College’s missionary aviation program, King and his wife, Carolyn, joined SEND International in 1970 and headed to Alaska to minister first in Tok, Tetlin, and Tanacross. SEND is an interdenominational Christian mission organization with more than 600 missionaries in more than 20 regions around the world. King began SEND’s aviation program in Alaska, expanding the work in the Arctic to Bettles, Allakaket, Alatna, and Anaktuvuk Pass. The scope of King’s vision continued to grow and when the Iron Curtain fell in 1991, he looked across the Bering Strait. King flew one of the first missionary aviation flights to Provideniya, in the Russian Far East, and eventually moved to Khabarovsk, Russia.

Years later, he returned to Alaska to train the next generation of missionary pilots. In 1999, King’s son, David, bought land in Chickaloon, Alaska, and together they built King Ranch Airport (AK59), the operating base for Last Frontier Air Ventures and Kingdom Air Corps. King runs a summer bush-pilot training program, teaching pilots and mechanics to fly and maintain aircraft in remote locations. The 1,700-foot private grass strip, carved from a mountain ridge, urges pilots to hone short- and soft-field techniques, as well as mountain flying skills.

The program culminates with these pilots flying to villages north of the Arctic Circle to transport youth to two week-long camps in the Brooks Range. The aviation-themed camps include not only sports and bonfires, but also chapel and flight training, keeping the focus fixed on things above. —KD