Get the app Get the app
AOPA Members DO more LEARN more SAVE more - Get MORE out of being a pilot - CLICK HERE
News & Media Pilots: Anthony Edwards 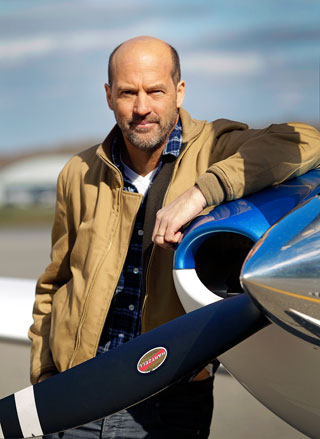 Long before actor Anthony Edwards played pilot Lt. Nick “Goose” Bradshaw in the movie Top Gun, he wanted to learn to fly. The youngest of five growing up in Santa Barbara, California, he fondly remembers a trip to Lake Tahoe in a general aviation aircraft with a friend of his father’s. When he turned 50 last year and his first child went off to college, he decided to start flying lessons—“It’s my version of golf,” he says. “I know enough pilots to know that it [flying] isn’t something you want to just dabble in. It takes commitment of time and focus to do it well. Finally an autumn opened up with the kids in school and a thumbs up from the wife.”

An actor’s life allows for full dedication to a passion; because his new television series had finished production (Zero Hour premieres on ABC February 14), Edwards was able to immerse himself in flight training. He took King Schools online courses in the summer and by fall was in the air with instructor Ryan Kandrach of Trident Aviation at Essex County Airport in Caldwell, New Jersey (Edwards lives in New York City). He soloed in 13 hours in a Cessna 172. Currently he is working on his instrument rating flying Cirrus SR20s from Westchester County Airport’s Performance Flight.

Edwards admits to “drinking the Kool-Aid.” He flies as much as he possibly can. “I love it. I found I have to fly at least every week. I can sense when I haven’t flown enough,” he says. So he plans flights to deliver favorite foods to his son in college and to check on the cats in his beach home. “I know,” he grins wryly. “I am very lucky.”

As for his iconic role in Top Gun, Edwards says, “I am now the guy in the pilot’s seat who gets to push the good-looking guy out of the airplane.” (In the movie, Edwards is the radar intercept officer to actor Tom Cruise’s pilot—“Maverick”—and dies when they are ejected from the F–14 Tomcat Cruise is flying.) Top Gun is being re-released in 3D at IMAX theaters this month (see “Briefing: The Need for Speed,” page 40).