Get the app Get the app
Get the latest news on coronavirus impacts on general aviation, including what AOPA is doing to protect GA, event cancellations, advice for pilots to protect themselves, and more. Read More
Already a member? Please login below for an enhanced experience. Not a member? Join today
News & Videos Time in type 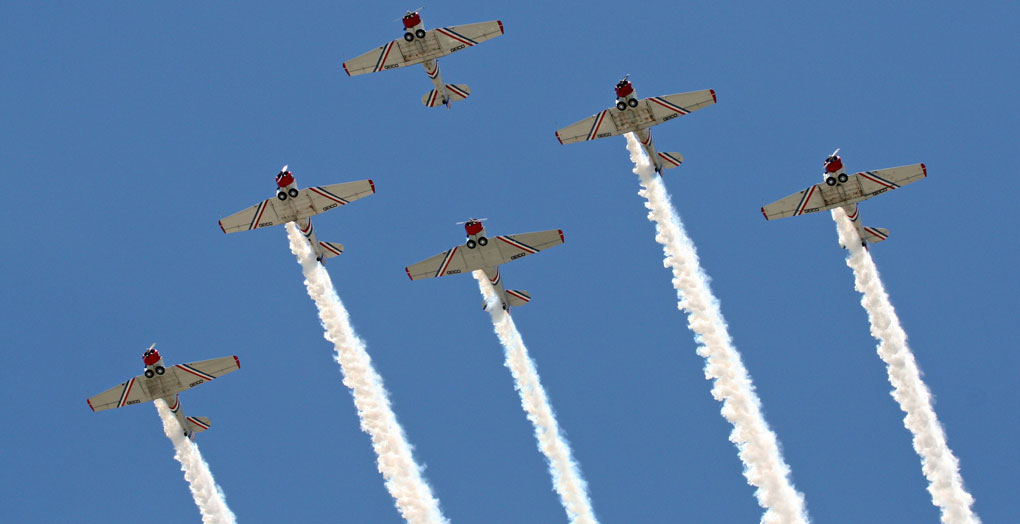 As six gloved hands pull six mixture controls to idle cutoff, the rumble of six idling Pratt & Whitney R-1340 Wasp engines gives way to a metallic tink, tink, tink as the Hamilton Standard constant-speed propellers spin to a stop. Seven pilots (two in the lead airplane) simultaneously open their canopies, take off their helmets, dismount, and position the propellers so their blades are horizontal. To the distant sound of applause, Number Six’s pilot marches down the flight line, joined in turn by his wingmen, until they reach the Number One ship. There the pilots shake hands and hold a quick, informal debrief of the performance. “That was the best rejoin ever,” one pilot said.

“Thanks, I thought so, too,” another replied. The formal debrief is later.

But the pause is brief. Promotional materials appear, and the pilots stride to the crowd line where their fans await. “Could I please have your autograph?” shouts a girl of about 5 in a pink dress. “Thank you.” “That was a great show.” Then they’re shuttled to a Geico tent to sign autographs.

Fog that was slow to burn off forced the Geico Skytypers to scrub a planned skytyping mission before their 20-minute airshow routine. Even so, each squadron member worked at least 12 hours on the hot, humid August day. 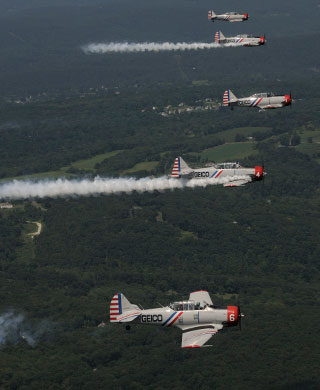 The squadron dates to the birth of skytyping (see “Typing in the Sky,” below). Lead pilot Larry Arken acquired the East Coast skytyping business from his father, Mort, in 1992, although the senior Arken remained involved in the operation until he died in 2007, at age 83. The younger Arken added more emphasis to the squadron’s airshow. “I seem to like that better,” he said. “We took the performance that used to be just a series of flybys and passes into something a lot more dynamic,” with opposing solos and other maneuvers.

“We do acrobatics but we don’t do high G loading. Anything we do has to be positive Gs.” While the SNJs are capable of negative Gs, Arken said the team avoids them because of the smoke oil they carry and its weight—airplanes three and five have oversized, 70-gallon smoke oil tanks in place of their rear seats. Because they’re on the outside of the skytyping formation, they burn more oil than the aircraft in the center. The other SNJs hold 43 or 44 gallons of smoke oil in tanks beneath the rear seats.

Day in the life

A day on the airshow circuit is not all glamor and excitement. Before 7 a.m. most of the team is having breakfast at their hotel in foggy Springfield, Massachusetts. They’re already discussing whether the fog will lift in time for them to skytype as scheduled. The team’s mechanics sit down and volunteer that the airplanes are ready to go.

Departure for the Great New England Air Show, at Westover Air Reserve Base in nearby Chicopee, is 7:30. The pilots discover an arrival route that avoids most of the heavy airshow traffic. The squadron’s mechanics, snarled in traffic, arrive after being redirected by cellphone.

The show briefing begins at 8:35 in “the hauler,” a tractor-trailer the mechanics drive to the venue. It carries equipment, spare parts, golf carts, and an air-conditioned meeting room usually used for briefings. Pilots review every aspect of the show.

Tom Daly leads the safety and operations segment of the briefing. “The golf course is going to be the best friend for us,” because it provides the best visual reference to the show center line. “We’re using the inside of the runway as our termination line as separation from the crowd.” The line they cannot cross is closer to the crowd but is not as easy to identify, he explains.

Outside, the fog is slow to lift—base meteorologists and flight service both have called it wrong. This throws the entire schedule in flux, and the pilots seem antsy. Finally, the word comes down: No skytyping today. Planeside at 1:10 p.m. for coordinated mount-up, engine start, and taxi for a 1:30 liftoff and 1:45 showtime. 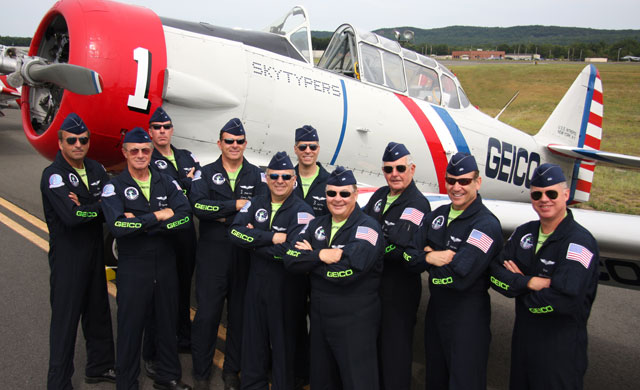 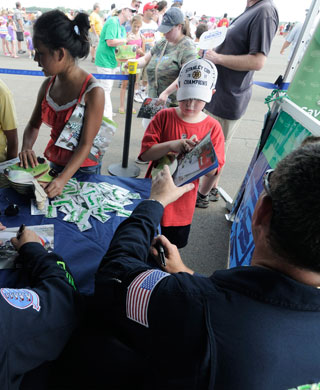 There’s a lot of history in this team. Ken Johansen, flying right wing, is the son of Bob Johansen in the slot position. Tom Daly, opposing solo, and Jim Record—a pilot assigned this weekend as the ground observer—were in the first class to graduate from Dowling College’s then-new aviation program. Daly, a retired New York City police officer and helicopter pilot, is now dean of that program; Record, a retired TWA captain, is one of his instructors.

New pilots join the team only by word of mouth. Arken and Bob Johansen have the longest tenures; most current pilots have been with the team at least 15 years. The newest have four or five years. Arken says the lowest-time member has 8,000 to 10,000 hours of flight time, an ATP certificate, and military as well as commercial airline experience.

“The flavor of the team has always been military,” he said. “My father was a 26-year military man. As a result, the majority of our pilots are military pilots, and most of them were fighter pilots.” Pilots with civilian backgrounds are welcome, but they have to conform to that culture. “On the team, 90 percent of us are presently flying or have flown for a major air carrier,” he added.

At 2:35 the pilots arrive at sponsor Geico’s tent, where the line already is more than 100 people deep. Fans get personalized autographs, and several families ask to take photos—younger kids are hoisted onto pilots’ laps.

At 3 p.m. it’s still hot and humid, and cumulus buildups appear northwest of the field. The mechanics service and secure the aircraft as the pilots return to the hauler for the debrief, which takes nearly two hours. They begin by watching Record’s video of the performance, taken from show center, and critique themselves frankly, sharing any places they feel performance was not what it should be.

Eventually they return to the hotel for quick showers before departing for a performers’ event put on by the airshow organizers.

Their day won’t end until after 9 p.m., and there’s another show tomorrow. Sunday’s weather already is on Arken’s mind; he’s concerned not only about weather for the show, but at Republic Airport on Long Island, where he hopes six SNJs, eight pilots, three mechanics, and a tractor-trailer will be by the end of the day.

The squadron uses six SNJs for the show; only five are needed for skytyping. “I love them,” Arken said. “They’re expensive to run, but they perform a mission that nothing else can do. They’re great formation platforms and they have the charisma of a military aircraft.”

They also can hold enough fuel and smoke oil to conduct the squadron’s current missions. As a result, the Geico Skytypers’ fleet won’t change anytime soon. In March the team will meet in Florida to practice for the 2013 season, which begins with the MacDill AirFest in Tampa April 6 and 7, followed by the squadron’s first-ever Sun ‘n Fun appearance April 12 to 14. The full schedule will be posted online. 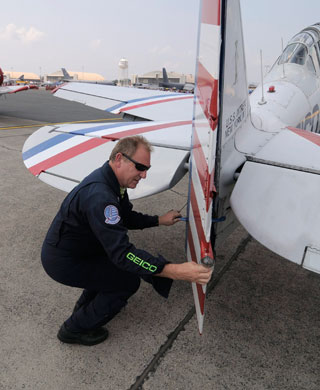 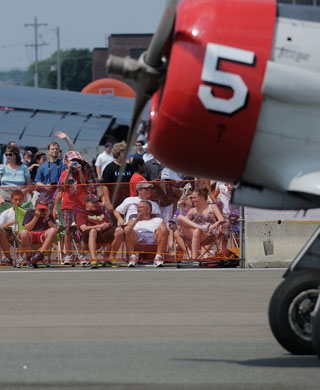 Typing in the sky

Airborne messaging was the origin of today’s Geico Skytypers. Team owner Larry Arken’s father was a military pilot and marketing person who recognized the commercial potential of skytyping, which had been invented in 1946 by Andy Stinis—one of the original Pepsi Skywriters. Stinis used seven North American SNJ advanced training aircraft, flying in a line-abreast formation, to “type” dots and dashes creating letters in the sky—imagine a very large, airborne dot-matrix printer. In 1964 Stinis received a U.S. patent for computer-controlled skytyping between aircraft.

Greg Stinis, son of skytyping’s inventor, moved a fleet of SNJ–2s to California in the mid-1960s and launched a West Coast division, hiring Mort Arken to run the East Coast operation. “My father saw that there was a tremendous opportunity to market this for other corporations to use,” Arken explained, and subsequently bought the East Coast business. (Greg Stinis’ son Stephen manages the West Coast operation today, which now flies Grumman AA-5B Tigers.)

When Arken’s father got involved, messages were encoded on paper tape—similar to ticker tape—and a reader on the lead airplane decoded the characters, transmitting commands to the smoke systems on each airplane in the formation. Smoke oil is sprayed onto the hot engine exhaust stack, and the positions and lengths of the resulting puffs of smoke spell letters that can be read from as far as 15 miles away.

“We’ve moved to the datalink, and have gotten very sophisticated,” Arken explained. Messages can be entered in flight through a mini-laptop with a touch screen. The Skytypers discovered that a message typed by five aircraft, instead of seven, was just as readable from the ground.

Flying line abreast, the five aircraft can type twelve 25-character messages an hour. The SNJs are 250 feet apart, so each character is 1,000 feet high. A message is about five miles long, and if winds are calm, it remains readable for three to seven minutes. Most skytyping flights are about three hours from engine start to shutdown.

“Typically skytyping is a much more relaxed operation than an airshow,” Arken said; the weather is good, and the air is cool at 9,500 feet. “It is harder for us to fly that formation, which is why after three hours I see the guys getting a little bit fatigued.”

The airplanes type a variety of messages—advertisements, corporate messages, birthday greetings. “We did a lot of wedding proposals last year,” Arken remarked. In the Long Island, New York, area, where the East Coast team is based, prices start at about $1,800 per message, although the team can travel anywhere. “We were over Chicago last year, at the Ryder Cup. We do a lot in Florida when we’re down there,” he said. The West Coast skytyping squadron is based in Chino, California, and Las Vegas. —MPC