Get the app Get the app
News & Media Personal Vision

After designing LSAs for others, Milan Bristela built the Bristell his way 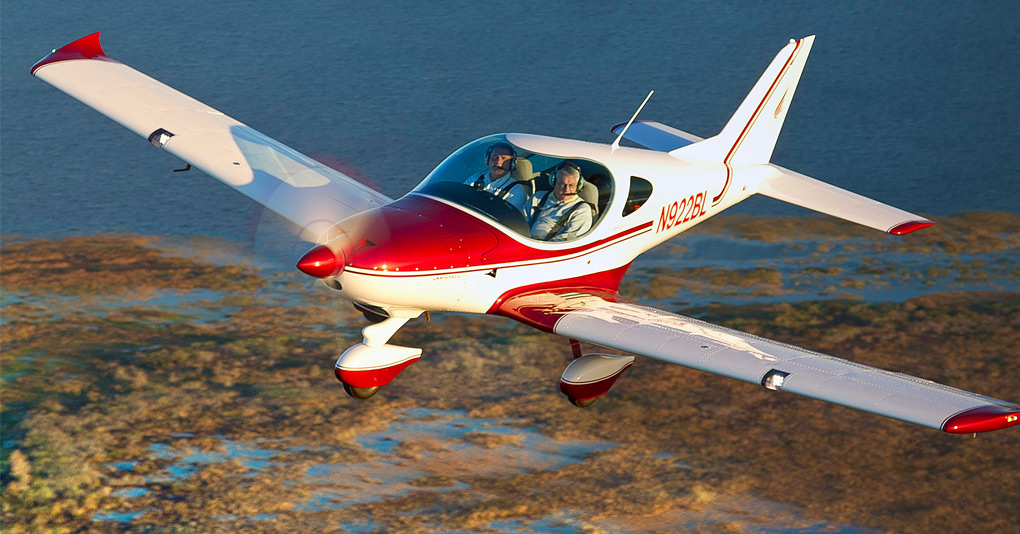 Even when you’re a top aircraft designer in a country with a reputation for building leading light sport aircraft models, you face frustrating compromises. In the case of aeronautical engineer Milan Bristela, that led to a desire to start his own company and make aircraft his way. He’s proud to give it his name: the Bristell.

This one, Bristela says, is not just for the usual profit motive. The Bristell was designed from the heart, and that’s why he prints “Wings with heart” on both sides of the cockpit.

The result is an aircraft with all the clever features Bristela ever imagined during his past four projects that include SportCruiser, briefly known as the PiperSport. It’s like nothing he’s ever done, and borrows its best features from the automotive industry. Although based in the Czech Republic, the company is named BRM Aero after a British Formula One race team: British Racing Motors. The letters even match the start of his surname and his first name. He was fascinated by the team and its famous world champion driver, Graham Hill, as a child. (The BRM name may yet appear on an all-electric British race car intended to compete in hill climbs.)

The base price is just less than $152,000 but covers a ready-to-fly, well-equipped airplane with avionics, certification, and shipping costs included. Most go out the door at $155,000 to $160,000. With all options (including a Garmin G3X glass cockpit), the price approaches $180,000. Most customers want not only an autopilot and glass cockpit, but instrument capability as well for training and practice in VFR conditions. 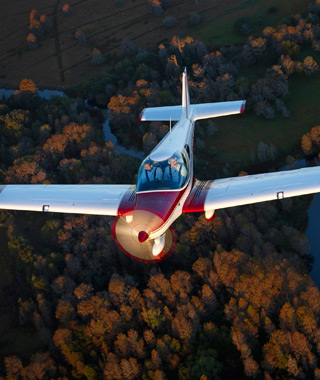 The first step Bristela made was to move away from composites and back to metal. “I decided to do an all-metal structure because I would like the plane to be used for 50 or 60 years, like with some of the DC–3s,” he said. (DC–3 production ceased in 1942.) “The all-metal structure is easy to check to see its condition. You can prolong the life of the metal structure, which you can’t do with composite structures.”

He used composites where it made sense, in this case on the rudder, the engine cowling, and around the canopy frame for a tight fit. That brings up another feature, a canopy that closes like a car door without extra latches. You just close it. A first latch keeps it from flying open if it should ever come loose. A second one locks it.

“Today’s customers are looking for the same comfort of the high-level cars,” Bristela said. “I copied the design of the cockpit as closely as possible to high-quality cars because that is the expectation of today’s customers.”

Another clever move was to build small extensions onto the fuselage that contain the spar. That way, passengers are walking on a continuous hard point as they enter the aircraft, instead of the soft metal of the wing.

While Bristela determined the overall look, he is listening closely to the American importers of the airplane. They are John Calla and Barry Pruitt of BristellUSA in Lititz, Pennsylvania, and dealer Lou Mancuso of Mid Island Air Service on Long Island, New York. Mancuso, an aviation legend in his own right—son of an aviation pioneer, and father of world-class airshow pilot Mike Mancuso—feels it is the best LSA he has ever seen. He has operated several other brands (at least five) in his flight school.

One of the changes Bristela’s American friends wanted was one he didn’t like. There is now a ground-power receptacle on the right side of the nose. Bristela feels it spoils the look of the design, so it will be moved on subsequent Bristells to the belly, just at the firewall. That will keep ground crew glued to the wing when pulling the plug, and well back from the propeller, not to mention that the receptacle will be out of sight.

Another refinement in progress is the size of the fuel tank. The pilot operating handbook says each wing tank holds 17 gallons of fuel, but tanks on the one I flew were clearly labeled as 15.8 gallons. The label was correct; it may be the tooling in the Czech Republic that is wrong. The matter will be resolved. The final number will be a total for both tanks in excess of 30 gallons—enough to keep the 100-horsepower Rotax engine running for six hours.

Here’s a quick list of additional cool features. There is a mount for an iPad on the co-pilot side. So many people are already using the iPad in flight—the one in the Bristell displayed a VFR sectional chart—that it was decided to include not only a mount but a power source.

The oil door is big enough to see both the oil and coolant levels without removing the cowling, as is required on some other models of light sport aircraft.

Leave it to Americans to suggest disco lighting for the instrument panel. A rope of red lights across the top of the panel provides plenty of light for night operations, and is available in blue or green. Two nine-diode LED lights, one on each wing, provide both taxi and landing illumination, and together draw less than three amps.

The cabin is 51 inches wide, two inches wider than a Cirrus SR22, and achieves that width at the elbows. Many times the cabin widths reported by manufacturers are widest either ahead or behind the passengers, Pruitt said.

The tail is sealed to keep nesting birds out, and the tail-mounted servo for electric elevator trim is located in a position where water will not collect and ruin it. Pruitt said that has been a problem with other brands of LSAs. Electrical connections in the tail are also located high in the fuselage to keep them out of any moisture that might collect.

Wheelpants are an option; as an alternative, flight schools can add composite wheel fenders to keep the bottom of the fuselage clean. There are toe brakes on the adjustable rudder pedals.

Options on the aircraft I flew include a TruTrak Flight Systems electronic flight instrument display that, once installed, allows the installation of a $3,000 altitude-holding TruTrak autopilot. A TruTrak TS-83 Wi-Fi module provides a backup engine display by sending engine data directly to an iPhone, iPod Touch, or iPad. There’s an app for that called iMonitor EMS for $50, which can record engine data every two seconds on to a thumb drive and plugged into a USB port. It also means someone can stand as far at 15 feet outside the airplane during a ground test, watching engine data. The airplane has Garmin radios and transponder, a Garmin GPSMAP 696, and a PS Engineering PM3000 intercom. 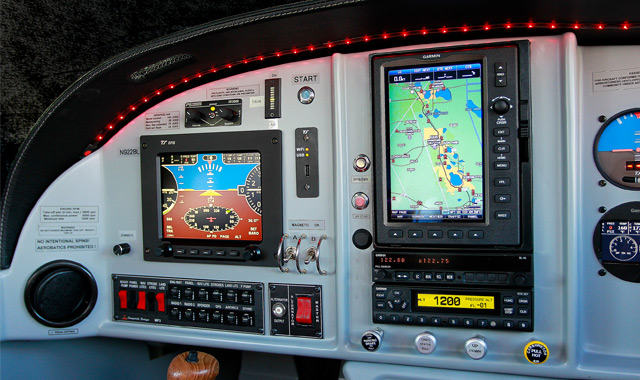 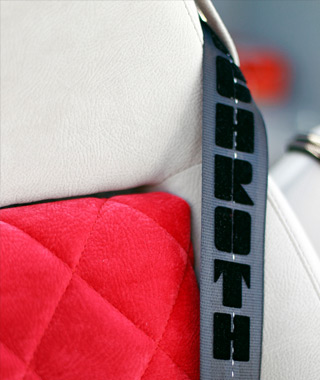 I got to fly the comfortable Bristell twice thanks to hiccups in coordination at Avon Park, Florida. The airplane scheduled to carry the photographer was in pieces and getting an annual inspection. Instead, I flew the Bristell in the pattern, making a couple of thumper landings that served to remind me of one of the differences between heavier aircraft and LSAs. The light aircraft don’t have a lot of mass. “There’s no inertia,” Pruitt said. “If you give up power too soon, there is no inertia to carry the aircraft down the runway, so you lose energy all at once and get a thumper landing.”

Making that perfect landing became an obsession. The next morning when our photo-shoot preparations began, we found the canopy was fogged; but, so were the windows of the Cessna 172 lead aircraft carrying photographer Chris Rose.

We had to wait anyway for oil temperature of the Rotax to reach the green arc, and by that time both aircraft had clear windows. Bristell officials huddled on the tarmac in light jackets to fend off the cold. John Rathmell and I were comfortable with the aircraft heater in action. Preflight had included an inspection of the two watertight wing lockers for baggage, one containing a factory-provided toolkit for field repairs. There is even a 12-volt air compressor that plugs into the power receptacle in the airplane for pumping up the tires.

In most aircraft, I have to consider whether to fly right seat or left for best visibility for formation photo shoots. With the Bristell, there was no issue; visibility was everywhere. Prepare for spectacular takeoffs in most of the Light Sport aircraft on the market. The Bristell climbed out at 750 feet per minute at 65 knots indicated. I had briefed lead pilot Phil Jimenez that we were going to be fast and to keep his speed up, but join-up with the 172 (with a 180-horsepower engine) took longer than expected. We asked him for a power reduction.

“I copied the design of the cockpit as closely as possible to high-level cars because that is the expectation of today’s customers.” —Milan Bristela 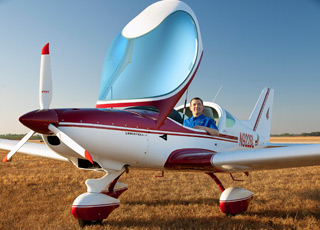 Pruitt said he saw from 108 to 114 knots true airspeed at a power setting of 5,250 rpm—varying his altitude from 1,500 feet to 9,500 feet—on the flight from Pennsylvania to Florida and back. The pilot operating handbook is intentionally conservative and suggests the aircraft will cruise at 89 knots true airspeed at 3,000 feet, although Pruitt said the actual number is closer to 110. (The specification box at the end of this article was changed to the more realistic 110 knots.) ASTM standards allow LSA aircraft to cruise at 120 knots true airspeed.

Only a light touch on the control stick was required to keep the Bristell in position above Lake Istokpoga, following radio and hand-signal directions by Rose in the 172. Red shafts of light from the rising sun played across treetops along the shore. When it was over, it was time for the landing I had envisioned, the non-thumper.

Rathmell suggested an overhead military-style arrival to the still-quiet Avon Park airport—it was not yet 8 a.m.—resulting in a 360-degree turn to final. The game was on. Although I hadn’t said anything, Rathmell could see what was coming. “You’re determined to make that smooth landing, aren’t you?” I confirmed his suspicion.

Leaving a little power on through the touchdown, I got the landing I had hoped for, and since we were far from the terminal where Calla, Pruitt, Mancuso, Bristela, and Bristela’s Web team and marketing team waited, I was determined that all humans and any Florida wildlife present on the airport would have time to notice. I kept the nose up a long time after touching down and later interviewed the waiting group to determine who saw the landing and who didn’t, and to inform those who didn’t of its eye-watering beauty.

As Bristela said, this model represents the way he always wanted to design. Although its starting price matches many light sport aircraft now in the fleet, this one may become known as the top of the fleet. 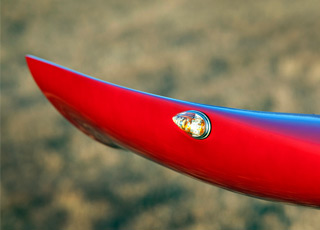 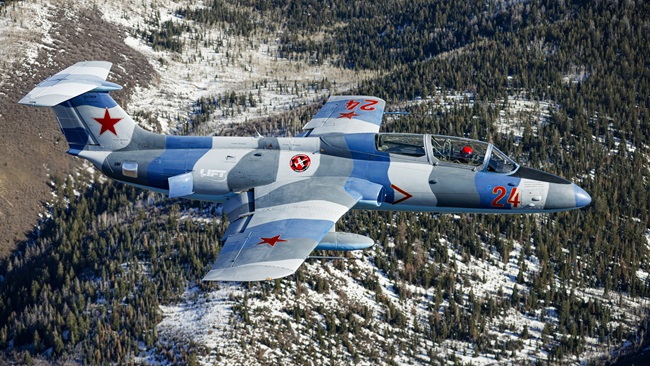