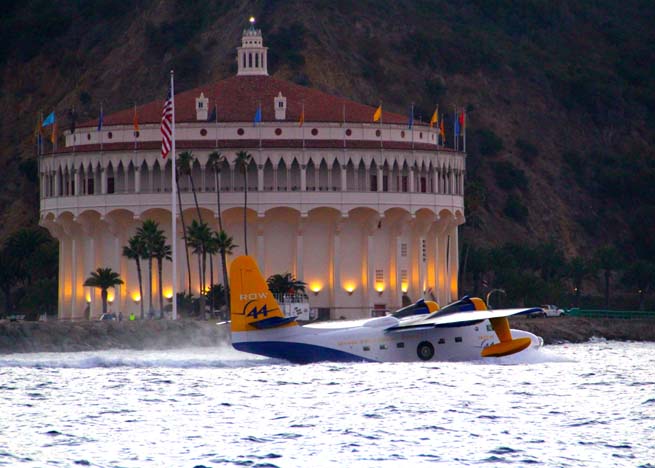 After thrilling audiences with a water-powered jet pack, DC-3, Grumman Albatross, and more in 2012, the Catalina Air Show and Festival appeared to be a one-time event.

While the setting over Avalon Bay gave spectators breathtaking views of the action from restaurants, boats, and swimming areas along the shoreline of the island off the coast of Los Angeles, it also meant organizers collected no admission charges at the gate, no fees for parking. Without a sponsorship big enough to put on a 2013 event, organizer Dan Teckenoff sent an email to supporters, volunteers, and performers thanking them and breaking the news that there would be no airshow in 2013.

“The cancellation was rejected,” Teckenoff said in an email to AOPA. “With loving support the overwhelming response was, ‘No you can’t.’”

Scheyden Precision Eyewear stepped in to sponsor the show for its second year, promising acts such as the aerobatic Red Bull Helicopter and Team Scheyden’s “Super Dave” Mathieson. Scheyden founder and instrument-rated private pilot Jeff Herold said he met Mathieson at the inaugural Catalina show and loved the venue. When Mathieson told him he thought the show wasn’t going to happen, he said he responded, “What? It’s like the coolest airshow ever!”

Avalon is like a throwback to the art deco era, he said, and spectators can watch from the back of their boats—“whether it’s a small ski boat or a yacht, an ocean-going yacht, or a raft. … You could be snorkeling.” He said the aerobatic box over Avalon Bay instead of an airport makes the setting unique, with mountains on one side and a beautiful natural harbor. With the title sponsorship of Scheyden, he said, “My hope for that show is that it becomes the coolest little airshow in all of North America.”

The 2012 event commemorated 100 years of aviation history on Catalina Island, starting with Glenn Martin’s flight of an amphibious aircraft from Newport Bay to Avalon Bay in 1912. It included a demonstration by water-powered jet pack pilot Dean O’Malley and performances of Clay Lacy’s DC-3 and Frank Donnelly's Taylorcraft over Avalon Bay.  According to a Scheyden media release, the show brought spikes in ferry traffic and nearly maxed out hotels on the island. Herold urged pilots to book hotels early. “We want to give the pilots a head start on the public,” he said.

Catalina Airport, often called the “Airport in the Sky,” has an interesting, sometimes called challenging, approach, Herold said, but he has flown into it many times. The airport has a café, and a shuttle bus runs regularly to Avalon. Pilots can contact the airport for landing fees and hours. It does not have fuel services, so Herold recommended pilots get their fuel at sponsor JFI Jet Center at Long Beach Airport (Daugherty Field). 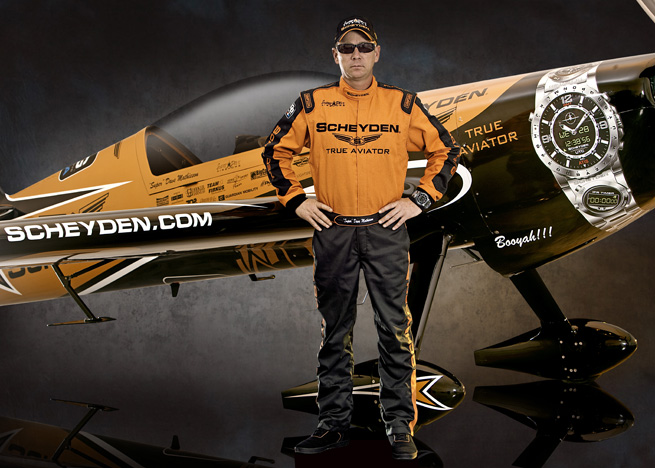 Chuck Aaron, flying the aerobatic Red Bull Helicopter, will be one of the feature acts of the 2013 Scheyden Catalina Air Show. In addition to Mathieson, other acts include Clay Lacy in his DC-3, John Collver in an AT-6, Team Rocket Aerobatics, Melissa Pemberton, and Jon Melby, according to a Scheyden release. As Herold talked about the airshow in this special venue, he upped the ante on what he had called the coolest little airshow in North America. He hopes instead to make it “the coolest little airshow in the world.”