Get the app Get the app
AOPA Members DO more LEARN more SAVE more - Get MORE out of being a pilot - CLICK HERE
News & Media Proficiency: Test driving an airline career

ATOP shows aspirants what the front office is like 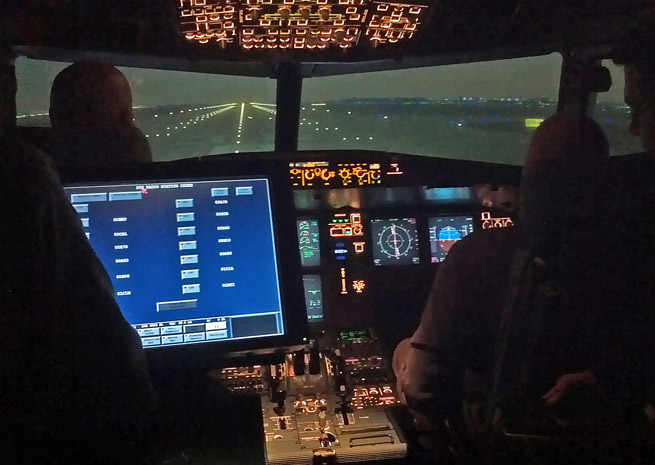 Normally, Jain would be strapping into a rearward-facing jump seat, gazing down an aisle of airline passengers. But, on this morning, Jain is in the first officer’s seat taking part in the Airline Training Orientation Program, which could help to put him on the path to one day fulfilling his dream of becoming an airline pilot.

A dream. “ATOP is a unique opportunity in the industry allowing any pilot to experience firsthand airline training and flight at a major airline facility for an affordable price. “More than 4,000 pilots have joined ATOP since 1993; many of them are now flying for United, Delta, Southwest, and more,” said founder Wayne Phillips, the former corporate and airline pilot who conceived ATOP.

Working in cooperation with airline training programs, and using their facilities during off hours, ATOP provides a realistic sample of an airline pilot’s training experience without the potentially massive required investment of time and money. The program started at United Airlines, and moved to Continental Airlines in 2002.

In late 2011, ATOP began operating with both American Airlines—utilizing its Boeing 737 simulators in Dallas—and JetBlue, using Airbus A320 simulators in Orlando. Anyone who has a student pilot certificate with 15 hours of instruction and an understanding of an ILS approach can experience a real-world introduction to the airline training environment.

The program costs $495, which includes 10 hours of ground school and two hours in cockpit management trainers. Then, participants can log a minimum of one hour of Boeing 737-800 or A320 simulator time, along with two ILS approaches and two landings, in a full-motion simulator. Pilots may opt to earn their high altitude/pressurized aircraft endorsement for flight above FL250 by practicing and demonstrating rapid depressurization and emergency descent procedures on a flight training device (FTD) for an additional $125.

“When ATOP started in 1993, it was a resource for aspiring airline pilots to give them a chance to test drive their career aspirations; a chance to see the airline training game up close and personal,” said Phillips. “Nowadays, it is more like 60 percent of pilots who merely want to live the dream but will never chase that career. About 40 percent are planning or toying with a career.” 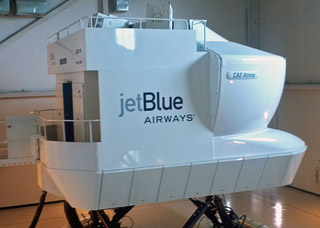 Turning talk into action. After a tour of the JetBlue campus and some brief introductions, Phillips dives right into the electrical systems of the A320, explaining the Airbus “lights off” philosophy; the importance of the essential bus; and the limitations of the auxiliary power unit.

After a noontime break, where plenty of time is allotted for meeting other attendees, Phillips gives a rundown of a day in the life of an airline pilot—weather briefing and planning at dispatch, meeting your flight crew, the review of the paperwork and maintenance records, usage of a minimum equipment list, safety checks, aircraft walk-around, and crew briefing. Then, the flow—starting with the windshield wipers and ending with engine start—as well as the details of a fly-by-wire computer control system and the introduction of its five flight control laws.

The afternoon was spent covering emergencies, the hydraulic systems (all three!) and their idiosyncrasies, fuel, in-flight emergency responses, and much more.

The optional high-altitude endorsement portion of the program consists of a presentation on high-altitude weather conditions, aerodynamics, and preparations, as well as an anecdote from an Aviation Safety Reporting System form from a clear-air turbulence encounter during cruising flight. Physiology, hypoxia, trapped gases, and even an ATC recording of a hypoxic pilot all hit home and underscore the need to understand the challenges of high-altitude operations.

“I was surprised at how much I actually enjoy the ground school portion in addition to flying the sim,” said Shawn Michaud, a 41-year-old Navy chief who lives in Florida.

But before the participants get into the simulator, they first utilize cockpit management trainers—low-fidelity mockups of the Airbus used by flight crews to perform “dry time” without tying up valuable training resources. The flight crews pair up and rehearse procedures.

Prior to the flight, Phillips engaged the students in a pre-sim briefing, conveying every detail of the proposed flight. These are the sims that the pros use. “No one gets it right the first time. But after you have been here for two weeks, after your fifth or so session, you will be a professional.”

Show time. Then, after all the briefings and instructions, it’s time to show that we have the right stuff. In teams of two, we enter the simulator’s cockpit, which makes even professional airline pilots think they are in the real thing. At about $20 million each, that is the point.

One of the primary lessons learned from the program is the criticality of checklist usage. Comparing the relative complexity of the A320 to a Cessna 172—even one with a G1000 glass cockpit—Jain was surprised by the simplicity of the Airbus checklist, and the reliance on flows and do-and-check versus a read-and-do system.

Others took away different lessons. Patrick Smith, a 26-year-old private pilot from Florida who is working on his instrument rating, said, “I think the biggest carryover lesson to general aviation is that any pilot should spend the time to learn systems inside and out for the aircraft they fly or intend on flying. You never know when a piece of knowledge about a particular system will save the day.”

Christopher Tenney, a 42-year-old pilot and former construction worker originally from Maine, noted the importance of “cockpit resource management, use of checklists, and seamless coordination of flight crewmember duties.”

The reality curve. “The biggest surprise is how well most of them do. This is the equivalent of flying a 170,000-pound airliner and the majority of the ATOP participants do very well. After they get the airplane on the runway, they have a great sense of satisfaction. Yeah! I flew an Airbus! I flew a 737! How many pilots can say that?” said Phillips.

“ATOP also adds strength to a resume. It is, for many pilots, the first and only exposure to multi-crew operations, CRM, and turbine flight that is not only loggable, but looks great in a resume.”

But, Phillips stresses, the road to airline flying is fraught with pitfalls and rough patches. “Candidly, the ATOP has fueled fantasies of giving up the daily grind—whatever that happens to be—for airline flying. But the transition is very difficult; not so much the flying but the economics of the change. How to bridge the change from a good-paying job to regional airline pay at $22,000 annually is a huge challenge. Earning $50,000 a year is at least five to seven years down the road. Then, there’s the cost of training to getting all the FAA certificates and building time.”