Get the app Get the app
Already a member? Please login below for an enhanced experience. Not a member? Join today
News & Media Author Richard Bach recovering, publishing, recollecting 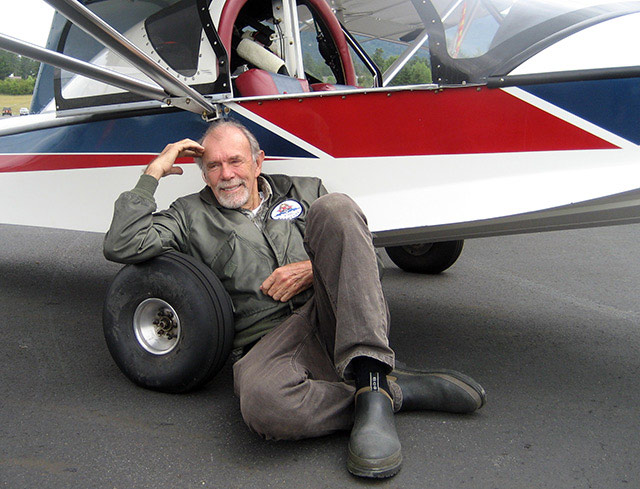 Richard Bach, relaxing after a flight with Puff, his SeaRey. Photo courtesy NiceTiger.

As he approached a private grass strip in his beloved Easton SeaRey, the skies were clear, the sun shone brightly, and the wind was blowing a gentle 6 knots across San Juan Island, just off the coast of Washington state.

Richard Bach, author of the iconic bestseller Jonathan Livingston Seagull, and, most recently, a new book about his SeaRey named Puff, continues his recovery from what happened next, on Aug. 31, 2012.

“Unfortunately, I didn't see the accident,” Bach wrote in an email relayed through his publisher, describing the crash for the first time in his own words. “I was on approach, on flare to a beautiful farm field, bright sun, wheels floating a few inches from the grass and then it all went black. I didn't hear a thing, nothing hurt, I thought I was dreaming. It took me half an hour (seven days human time) to wake up, and I was in a hospital!”

According to a preliminary NTSB report, Bach, who was flying alone to visit a friend, struck power lines. A witness told the NTSB Bach’s SeaRey “nosed over and impacted terrain.”

Bach, among the most prolific writers of aviation fiction and certainly among the most successful when it comes to describing the ineffable joy of flight, suffered serious injuries. He was flown to Harborview Medical Center in Seattle.

“People have given me accounts of what they knew, but it was like nothing that I felt for the half hour, no bent metal, no fires, no brave souls pulling me from an inverted cockpit,” Bach continued. “Sounds more like fiction than what I knew. Lots to be said for that time, but I may have been dreaming.”

Family and friends rallied around the stricken pilot, his son, James, fielding questions from the Associated Press after the accident.

Already on his publisher’s desk was a fresh story about love and flying: Travels With Puff: A Gentle Game of Life and Death, released to the world March 19 (to be reviewed in brief below), the day Bach responded, in writing, to questions from AOPA Online.

“You're right, not a whisper of that day in the book,” Bach wrote. “I delivered the final manuscript for Travels With Puff, the day before the—whatever it was played jokes on my beautiful landing. To keep the story, as it had been printed, we kept it intact. There's a different story which I'll write if I ever understand it.”

Puff, the experimental amphibian and central character in Bach’s tale, was badly damaged. It was a mishap foreshadowed, if unwittingly, in Bach’s description of the first encounter with his newly purchased airplane, when he learned two previous owners had survived mishaps of their own. The most recent owner had decided he “didn’t care for the airplane” any more, though Bach’s reaction has been quite different: “Puff will be rebuilt, of course,” Bach wrote. “Dan Nickens' airplane, Jennifer, who flew across the continent with Puff, she's offered her own spare wings to get Puff airborne again. What a kind gesture that is!”

The author recalled his childhood love of Kenneth Grahame’s 1908 classic, The Wind in the Willows, which provides a thematic reference point for Bach’s newest story, and continues to inspire his recovery.

“How can we live without Mister Toad's obsession with flight?” Bach wrote. “With friends like that, I plan to be flying soonest.”

Travels With Puff: A Gentle Game of Life and Death

Resist the temptation to be too literal, to cling stubbornly to the empirical, to purely logical, provable facts, and Richard Bach will take you along for an enjoyable ride.

Travels With Puff: A Gentle Game of Life and Death (published March 19) is more whimsical than a book another pilot might produce: firmly in the sky, drawing on childhood tales where animals speak and gently push the reader to another kind of truth.

It is, like many of Bach’s previous works (including Jonathan Livingston Seagull, the 1970s bestseller for which he is best known and the final part of which he recently completed), an expression of love—love for flying, for an airplane, and the joy it brings.

Puff, the central character, is a SeaRey amphibian, N346PE, and a talkative airplane at that—a running conversation with Puff (acknowledged as the product of the author’s imagination) is woven through pages that describe his acquisition of the experimental airplane built by a previous owner, and subsequent transcontinental flight, a flight of two with friend and fellow SeaRey pilot Dan Nickens. The journey from Florida, where Bach became the airplane’s third owner, to the San Juan Islands of Washington, nestled between Seattle and Vancouver, provides the context for a relationship that deepens from a fragile beginning, through patient practice and instruction, into a full-throated duet:

Puff purred along, not a single miss from her engine, nor had there been one ever, since we first met.

What a dear soul you are, I thought, how close is your spirit to mine. Not one second of this adventure, of this bright whole discovery-of-life would have been possible without you!

I felt her life, gently brushing.

There’s a moment I’ll not forget.

The former fighter pilot and barnstormer makes no bones about his belief in the spirit of airplanes.

“For the last fifty years, since I resolved to trust my own perceptions, I’ve known that airplanes have spirits,” he wrote. And so the conversation unfolds.

Travels With Puff is crafted with a nonflying audience in mind, and Bach is careful to limit jargon, and truncate many technical details, though he speaks to pilots, also. He recites checklists, and details in self-effacing prose his first attempts at landing the SeaRey, moving on to even wilder tales including a memorable and frantic dash across a lake to the shelter of Kermit Weeks’ hangar, a powerful thunderstorm bearing down and whipping up white caps.

“When you need to get an airplane pilot’s attention, say, ‘Gusts to …,’ and add a number like forty,” Bach wrote. “Doesn’t need any context. Just the phrase, and watch what happens.”

Travels With Puff is a book any pilot might hand to a nonflying friend, or significant other, by way of explaining the hold that aviation takes on its practitioners. From the chapter entitled “Best Day Flying, Ever?” a passage (among many) that serves this purpose, describing a landing with Nickens (whose photographs illustrate the book), a pause for pair:

Deserted Beach Number Two: what a feeling, touching down on rippling transparent blue sunlights flashing, stepping to a sugar-sand beach, happily self-stranded for an hour, or a day, for however long we wish. A tune being hummed, here, about freedom to live our lives as we choose. A song about choices.

Moments like this are the substance of the book: an aviator’s travelogue steeped in freedom and adventure, and child-like wonder.

Absent from the book, which was delivered to the publisher in manuscript form the day before Bach clipped power lines while landing on a grass strip on San Juan Island Aug. 31, 2012, is any mention of that crash, from which the author continues to recover, a context that may be hard for some readers to escape. Bach said in an email interview that the story was already complete. Puff will be restored, and he plans “to be flying soonest.” But the final seconds of the flight, which ended with Puff nose-diving into the ground just short of the grass runway, remain elusive.

“Wish I had details, but all that's left after the last page has been my own dreams,” Bach wrote March 19, looking forward to flying again.