Get the app Get the app
AOPA Members DO more LEARN more SAVE more - Get MORE out of being a pilot - CLICK HERE
News & Media Flyoff: RV-7 vs. Mustang II

Fly Off pits competitive airframes against each other in wing-tip-to-wing-tip contests designed to reveal real-world performances differences—and AOPA Pilot editors share the findings, and their opinions about the merits of each design. Let us know which airplane matchups you’d like to see in future Fly Offs, and we’ll bring you the results in AOPA Pilot and videos on AOPA Live This Week.

Our first moment of truth comes somewhere over West Virginia.

The Mustang II and Vans RV–7 are flying side by side at 6,500 feet, and the pilots of both airplanes push the power wide open at the same time. Our aerial drag race is on.

“Going to full power,” my colleague Ian Twombly transmits from the Mustang cockpit as I do the same in the RV–7. “We’re wide open.”

Manufacturers, aircraft owners, and pilots make all kinds of performance claims about the airplanes they build, own, and fly, but there’s nothing quite like a side-by-side fly off to see how competing designs measure up.

These two popular kit airplanes are both built to specifications—and they’re extremely well-made and well-cared-for examples. (In fact, Carlo Cilliers, owner and builder of the Mustang II, won a workmanship award for his airplane at EAA AirVenture 2012. And RV–7 builder, owner, and pilot Bill Cloughley meticulously followed the Van’s Aircraft plans to make his airplane light and straight.)

Both airplanes are equipped with parallel-valve Lycoming IO-360 engines and constant-speed Hartzell propellers; in addition, their empty weights (1,070 pounds for the Mustang and 1,100 pounds for the RV–7) are closely matched. With two pilots and about 25 gallons of avgas in each airplane, it’s a pretty realistic comparison.

The two airplanes stay together for about five seconds, but then the Mustang starts pulling away. After 20 seconds, the Mustang is holding a substantial lead
and nine-knot indicated airspeed advantage over the RV–7 (155 KIAS to 146, or 174 KTAS to 164) and the expanding gap between the two airplanes confirms the ASI readings.

The Mustang is definitely faster.

But which airplane has the better climb rate?

We rejoin, move into a line-abreast formation, push the throttles and props all the way up, and pitch for VY. At 7,500 feet, the two airplanes are almost perfectly matched with identical climb rates of 1,700 fpm. They are wing tip to wing tip, and there is no discernible movement between them.

Now it’s time to find out which airplane can fly more slowly.

We decelerate together with flaps up and bring the throttles back to idle in level flight. Indicated airspeeds slow to 80 knots, then 75, then 70.

Finally, at about 68 KIAS, the Mustang’s tapered wing stalls and the airplane rolls about 30 degrees to the left before recovering. The RV–7—with its lighter wing loading and rectangular, Hershey-bar wing shape—is still solid and stable and about eight knots above its stall speed. (And the RV–7’s stall, when it does come, breaks crisply and straight ahead.)

We repeat the exercise, this time with flaps down, and the result is quite similar, although this time the Mustang’s wing drops at about 63 KIAS.

There’s no doubt the RV–7 enjoys a distinct low-speed advantage.

Back in the traffic pattern at Maryland’s Frederick Municipal Airport, that stability allows a normal, full-flaps approach at 65 KIAS and a ground roll with light braking of less than 1,000 feet. The Mustang approaches at 85 KIAS and its ground roll is nearly double.

The handling qualities of both airplanes are exceptional with well-balanced, authoritative controls
over each airplane’s full range of performance. The control forces in the RV–7 are light; the Mustang’s are slightly heavier with a crisp, sports-car feel. Which style a pilot prefers is a purely subjective matter of personal taste.

Editor’s note: Special thanks to Bill Cloughley, AOPA 2084201, and Carlo Cilliers, AOPA 1326694, the builders/owners/pilots of the RV–7 and Mustang II flown and photographed for this report. 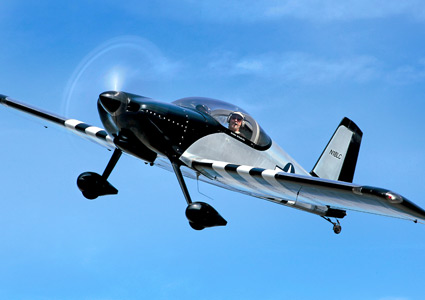 Top speed is the simplest and most talked-about measure of aircraft performance—and the least important.

Who among us flies at full throttle, with the prop at max rpm, the mixture full rich, at low altitude, except during takeoff and initial climb? Unless you’re racing at Reno, your typical flight profile probably involves a climb, a reduction in prop/engine rpm, and leaning the mixture. When you do those things, the Mustang II’s speed advantage over the RV–7 becomes a rounding error.

Far more meaningful are the criteria that comprise what Vans Aircraft Founder Dick VanGrunsven calls “total performance.” Those considerations include short-field performance, aerobatic capability, ground handling, control harmony, comfort, visibility, and fuel efficiency. Some of these qualities are hard to quantify, but they add up to versatility, and that’s where the RV series shines. No other general aviation aircraft—Experimental or FAA-certified—can match RVs across the full performance spectrum.

And while we’re talking about intangibles, here’s the biggest: The RV community of builders and pilots is an actual community. Nearly 8,000 RVs have been built and flown around the world, and the people who own, build, and fly them are among the most knowledgeable, skillful, friendly, cooperative, and active people in aviation. They happily share information and provide mutual support. They also do more actual flying (as opposed to hangar flying, coffee drinking, or doughnut eating) than any other aviation group I know.

For all these reasons, the RV–7 is the superior airplane in this contest. —Dave Hirschman (Owner of an RV–4) 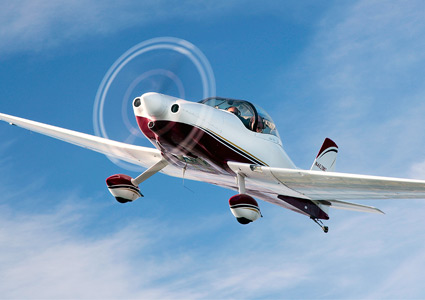 Mustang II: No Substitute for Speed

As far as I’m concerned there are two legitimate types of airplanes—those that go fast, and those that go low and slow. If you want to get up and go somewhere, then by all means get on it. And if speed is what you’re after, the Mustang II should be the new object of your affection.

Like all great things that go fast, it’s loud, somewhat cramped, and visibility on the ground is awful. If the speed doesn’t make you feel like you’re on a rocket to space, strapping into it will. I felt like an astronaut who needs help from the white-coated engineers handing me my gear—not to mention that, while on the ground, the seating position has you looking more at the stars than the Earth.

But none of that really matters. The Mustang II has a great name, a great look, and flies as beautifully as anything I’ve ever been lucky enough to lay my hands on. The controls are light without being twitchy, and responsive without being unstable. It just feels right.

The RV–7 is a nice airplane, no doubt. But next to the Mustang it looks like a Cherokee (Hershey-bar wing, anyone?). And I’m not oblivious to real-world concerns. Speed is not the only factor. The Mustang II climbed at 1,700 feet per minute with two big guys at 6,000 feet, and it stalls gently. It does require a long runway, but 90 percent of those in the United States will be just fine. Oh, and did I mention that for those like me who will never build an airplane, you can buy a Mustang II for about half of what an RV–7 goes for these days? Saddle up. —Ian J. Twombly