Get the app Get the app
Get the latest news on coronavirus impacts on general aviation, including what AOPA is doing to protect GA, event cancellations, advice for pilots to protect themselves, and more. Read More
Already a member? Please login below for an enhanced experience. Not a member? Join today
News & Videos Cirrus SR22T: More of a good thing

We put the biggest “what’s new” about the new Generation 5 Cirrus SR22T to work right from the start in our ultimate cross-country trek—the 200-pound increase in maximum takeoff weight. With the increase in MTOW to 3,600 pounds, a normally aspirated SR22 can now actually carry four adults and full fuel. 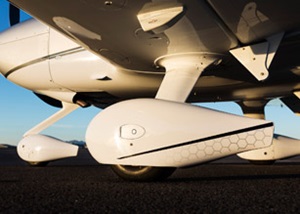 Furthermore, the now-standard three-abreast back seat means a pilot has even more versatility to swap fuel for useful load to potentially carry five souls.

As a cold March rain drummed the steel hangar roof in Frederick, Maryland, Matt Bergwall, Cirrus product marketing manager, skeptically studied the pile of luggage and gear next to N551JW. AOPA Live Executive Producer Warren Morningstar produced a small portable scale and began weighing each of his many bags of video gear. With the 60-part of the 60/40 split back seat folded down, I loaded the bags through the SR22’s generously sized baggage door. Tripod cases protruding across the folded back seat, camera bags carefully nestled on top, and other smaller bags and suitcases tucked into every corner. With the gear and a load of fuel to carry us all the way to Illinois, we bumped 3,600 pounds on the scale.

Mount Vernon, Illinois, would be our first stop on a headwind-hindered westward trip from Frederick to Santa Fe, New Mexico. On one of those no-wind days that live only inside pilot operating handbooks, we could have made the 1,360-nm crossing with only one fuel stop in just 6.8 flight hours up in the flight levels, where the 22T can crank out more than 200 knots true airspeed.

But in the realities of pre-springtime flying, ever increasing headwinds at higher altitudes forced us to stay below 10,000 feet almost the entire trip. Even then, an average of 25- to 40-knot headwinds all day long forced two stops and led to some 10 hours of flying. But with big windows to watch the continent scroll by, friends to share pilot tales, and XM stereo through the headsets, what’s not to like about a nice day of flying?

And a nice day it was, once we left the rainy Appalachians behind us. Despite the wind we enjoyed a smooth ride and clear skies for the rest of the trip that had us making a second stop in Pratt, Kansas, just downwind of the cattle yards. We climbed to 12,000 feet and dog-legged a bit south before hanging a right just past Las Vegas, New Mexico, to turn into the valley that is home to Santa Fe. The setting sun brilliantly back-lit the chocolate brown mountains just west of the airport. 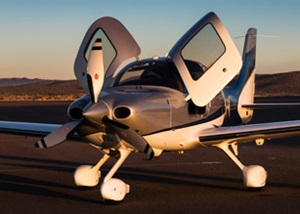 While we had spent most of the day at 8,000 to 10,000 feet, the Earth had come up to meet us, meaning a short descent to Santa Fe. Across the bottom of the Garmin Perspective’s multifunction display, the horizontal contour display showed the rising terrain. Garmin’s active terrain warning system painted peaks near or higher than our altitude yellow and red. The high-resolution synthetic vision technology (SVT) provided further clarity about the nearby features. Need yet more comfort? We turned on the ship’s MaxViz infrared camera, which clearly showed the mountains in real time even as darkness spread across the valley. The camera is housed on the bottom of the left wing.

Our ride this day was not your average Generation 5 SR22T. N551JW is a Vision Inspired model, which gives an aesthetic and badging nod to the Cirrus Vision single-engine jet in development. Those buying the Vision Inspired package get a price break on their jet order as well as an SR22T with a host of unique features, such as tri-color paint and honeycomb exterior decal that replicates the look of the carbon-fiber structure prevalent on the jet.

Among the other exterior details are black baffling, sterling spinner, and stainless steel cowling Camlocs. Inside, the model is replete with nuances, such as a Vision Inspired door threshold badge and another such badge below the audio panel.

Puts out 36.5 inches of manifold pressure at takeoff, burning about 36 gph.

The all-black leather seats incorporate inserts and detailed panels that mimic the carbon-fiber theme. Similarly, carbon fiber touches adorn the panel. Cabin light housings and air vents come in brushed aluminum. The Vision Inspired package can be added to a well-stocked SR22T, which typically includes air conditioning and a certified anti-icing system along with the infrared camera and the Global Connect Iridium satellite phone for making calls and sending texts. Global Connect also allows for datalink weather for customers outside the range of the Sirius-XM satellite constellation.

Meanwhile, the Generation 5 upgrades focus mostly on changes necessary to accommodate the higher MTOW. In case you thought you missed something, there was no Generation 4 Cirrus. Generations 2 and 3 were upgrades and manufacturing improvements over earlier models. Bergwall confessed, rather sheepishly, that Generation 5 just sounded better from a marketing standpoint than 4; and, he said, 4 is an unlucky number in some countries.

Tom Arnold, vice president of sales, described the Generation 5 project as a one-year program that took 25 months. Bergwall concurred, saying that certifying a new, larger parachute to accommodate the higher weight set the project back nearly a year. The 65-foot-diameter parachute (earlier ones are 55 feet) is made of a new and lighter material, but still weighs more than the old one. But the larger diameter allows the heavier airplane to settle to the ground at the same rate as a 3,400-pound model. A new electrically actuated rocket igniter blasts the chute from the airframe when the pilot pulls the still mechanical handle over head. Independent electrical connections to the ship’s main and emergency batteries assure a continuous supply of power. The new system replaces the 1990s technology in the old models.

To meet the demanding need to have a single-engine stall speed below 61 knots, Cirrus increased the flap travel by 1.5 degrees on the Generation 5 airplanes, according to Bergwall. The strengthened flap hinges provide a much bigger benefit though—initial flap deployment speed jumps from a modest 119 knots indicated airspeed to a much more useful 150 KIAS. The change gives the pilot a very useful tool for managing descents in the slippery airplane and essentially eliminates the need for speed brakes. Deployment of the second notch of flaps can now occur at 110 KIAS, up from 100. 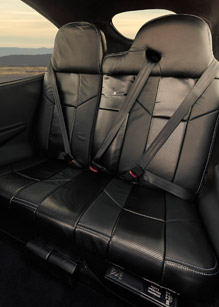 And, speaking of small things that make a big difference, Bergwall reports that while the 200-pound MTOW boost is a big deal with customers, the most prevalent comment from current Cirrus owners is accolades for the redesign of the wheel fairings to incorporate a small hinged door so you can easily check tire pressure—a long-requested feature. Structurally, many parts of the airplane required changes to accommodate the extra weight. For example, the one-piece carbon fiber spar was strengthened, as was the landing gear.

The highly integrated Cirrus Perspective by Garmin avionics suite now incorporates the formerly mechanical fuel gauges; the old round gauges on the center pedestal are gone. New digital fuel senders in the tanks provide highly accurate fuel quantity readings for display on the MFD, a much needed upgrade from earlier models. The accurate fuel readings make it easier to trade some of those 92 gallons of fuel for payload.

With the fuel system change, the level of systems integration is remarkable. Perspective manages all of the airplane systems, including oxygen distribution
and quantity reporting; TKS anti-icing fluid quantity and tank balancing—even alerting the pilot to high carbon monoxide levels and unbalanced fuel levels.

Flying it could hardly be simpler. An automatic wastegate controller manages the turbocharger, allowing the pilot to push the throttle full forward and leave it there, and the mixture full rich, until leveling for cruise. Then the pilot simply pulls the power back to about 85 percent as shown on the MFD. Slide the mixture control back and watch as the fuel flow indicator matches up with a blue hash mark on the fuel flow gauge.

You’re done, set for lean of peak economy cruise. No cowl flaps to close, no tedious charts to consult, no intense juggling of fuel flow against cylinder head or exhaust gas temperatures. In our case, at 8,000 to 10,000 feet at about 85 percent power and burning about 18 gph, we saw true airspeeds of about 177 to 180 knots on a slightly colder than standard day. The POH, which contains only FAA certified data, says at 25,000 feet it will do 213 KTAS on about the same fuel. 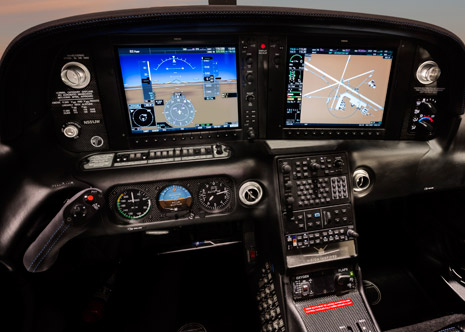 Meanwhile, the GFC 700 flight control system guides the airplane with a deft digital hand, managing every phase of flight until just short of touchdown. The SRs like to land a little flat, more like a jet, which will help those transitioning up to the Vision.

I remembered that attitude and slipped the airplane gracefully onto the runway at Mount Vernon. Forty-eight hours later when we had moved from Santa Fe to our final destination at South Valley Regional Airport near Salt Lake City I got distracted and reverted to a more Bonanza-like attitude, wanting to flare a bit too much and a bit high. With Bergwall’s encouragement I pushed the nose over and waited for the runway. All the pieces remained attached as we arrived, but it reminded me that every model has its own way of doing things.

With all of the capabilities baked into a late model SR22—known-ice certification, air conditioning, air bags, parachute, the incredibly integrated and capable Perspective panel, seating for five, and the possibility of turbocharging—one is hard pressed to ask more from a single-engine piston except for a much-needed boost in payload, which is exactly what the Generation 5 models provide. Not surprisingly, Cirrus reports that sales have jumped dramatically this year thanks to the greater useful load. Generation 6? Well, one can only imagine. 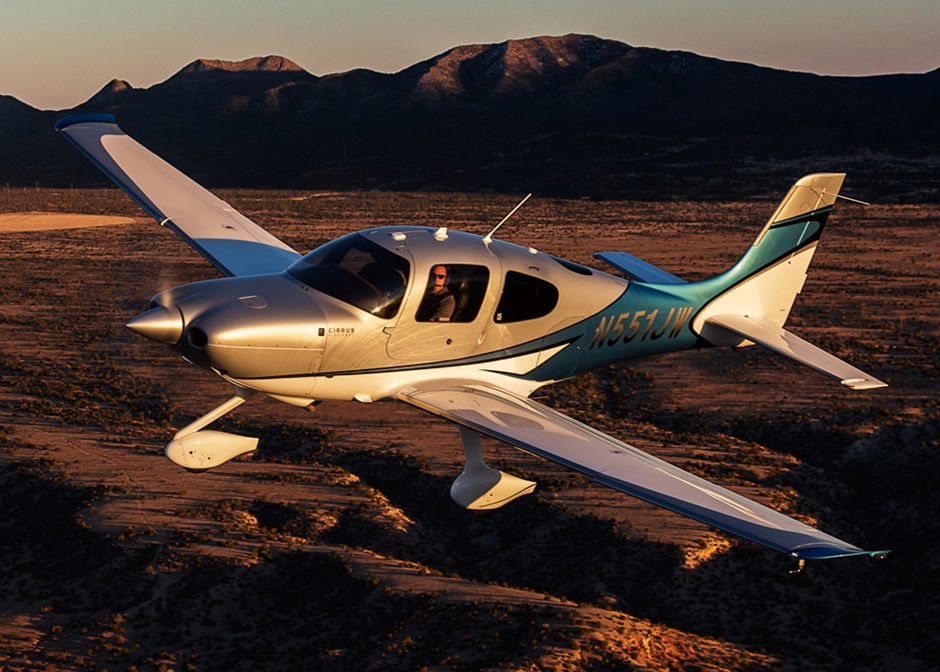