Get the app Get the app
AOPA will be closed July 4th, in observance of the Independence Day holiday. We will reopen at 8:30 am ET on Tuesday, July 5.
News & Media Small airplane lands on cargo ship, cameras rolling

Editor's note: The video that originally accompanied this story is no longer available.

Conditions were just right, so Jaap Rademaker decided to go for it: With cameras rolling, he set up for the approach to the deck of a cargo ship.

The target: about 60 meters of available deck, which had been cleared as an emergency landing site. He would have to approach from the left to avoid the ship’s bridge and a four- or five-meter-high bridge crane at the approach end. Rademaker’s Foxbat A-22 microlight has an approach speed of 40 to 45 mph, he said, and the ship plowed forward at about 9 knots. Winds were about 14 knots, he added. 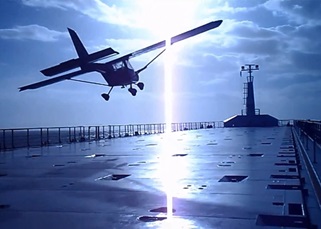 The approach was “absolutely perfect”—until about two meters above the deck, when airflow around the bow and sides tossed the aircraft in turbulence.

“I had a very dry mouth, and thought, ‘What have I done? How the hell am I going to get out of here?’” the U.K.-based Dutch pilot told AOPA in a phone interview. He kept control and landed the light airplane on the vessel in the English Channel, about 20 nautical miles south of the port of Folkestone in southeast England.

The Oct. 17 landing—captured on video from the air, the ship, and inside the cockpit—has attracted desired attention from the shipping world, Rademaker said. It’s also piqued the interest of pilots; the original video had more than 205,000 views on YouTube by Nov. 6, and a second video with higher-quality video was beginning to rack up plays.

Someone should land on this

Rademaker met Johan Hartman of the shipping firm Global Seatrade through his involvement in ship finance. Both pilots, the two men had the same thought while surveying the spacious, flat deck of one of Hartman’s new M2 Runner cargo ships: Someone should land on this.

The kernel of an idea grew in conversations with pilots he knows through the Headcorn Aerodrome-based Tiger Club, which bills itself as the “home of sport aviation in the UK.” Pilots Anna Walker and Brendan O’Brien advised him from their experience of truck-top landings at airshows, he said, before he set out on the flight accompanied by two aircraft with video equipment aboard (one with O'Brien at the controls). It was to be an aerial shoot of the airplane with the vessel, he said … and maybe something more.

“We kind of did not expect to be able to land on the ship,” he said. “…We kept it in mind as if conditions are perfect, it might be possible.” 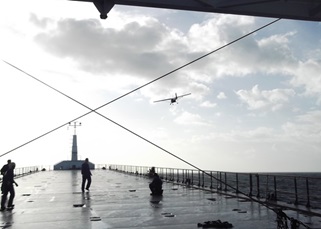 Rademaker, a 600-hour pilot who flies the U.K. equivalent of light sport aircraft, had no military flying experience that might prepare him for a carrier-type landing. He did have experience in microlights on short fields and an incentive to promote the ship building and operating company in which he invests. What better way to spotlight a new ship designed for high-volume, low-weight cargo than to land on the aircraft-carrier-style deck?

The captain of the ship, Bertus de Vries, had organized the filling in of lashing eye recesses on deck in case of an emergency landing and trimmed the bow as low as possible, Rademaker said. Although the ship couldn’t travel faster than 9 knots empty, conditions overall were good, he said.

He could think of no legal reason not to land on the ship: He was in a private airplane landing on a private ship with the consent of the owner. In a worst-case scenario, he said, he’d end up in the water without a penny back from the insurance company. With five guys ready with a lifeboat on the ship, a rotorcraft hovering overhead, and a dry suit to keep him warm, it was a risk he was willing to take. 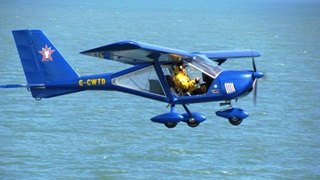 Rademaker had made several passes near the bridge and felt that he had perfect control. He could communicate with the other aircraft via radio, but his only link to the ship captain was through text message. The ship was headed toward land and could only maintain the current speed for 40 minutes, he texted. If he was going to land—and take off—he’d have to do it soon.

He set up for the approach, paralleling the boat until he passed the obstacles. Then he shifted to the right and descended to the deck. He knew to expect the turbulence when he got close to the deck, but he said he didn’t expect another disconcerting effect: At a meter or two above the deck, he lost many visual references. He could see the mast in front of him, but it was hard to determine how far away it was until he had set the aircraft down.

The ship pitched and rolled on the water. One of the crew grabbed the right strut, as planned, but no one appeared to secure the left side. The light airplane began to blow sideways, and the railing of the deck seemed awfully close. Keeping the controls forward, Rademaker opened the door and put out his foot to stop the airplane as someone came to grab the left strut. 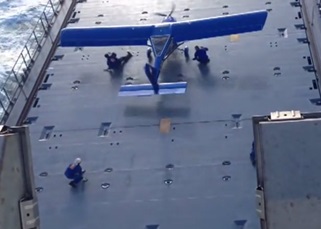 They lodged the left wheel in a lashing eye to keep the aircraft in place, and Rademaker had enough time to take a photograph with the crew, make sure the deck was clear for takeoff, and go. But takeoff proved to have an unexpected challenge: The tires slipped on the deck when he tried to run up the engine for takeoff.

Rademaker later expressed gratitude to the four men who came out to hold the aircraft in place as he gave it full power for his short takeoff. The video shows them straining to hold it back. The two on the outside let go first, and the remaining two held tight, slipping on the deck a bit before letting go in sync. The airplane lifted off, rocked its wings, and headed toward land.

Weeks after the landing, Rademaker marveled at how the stars had aligned: a willing and capable crew on the boat, camera crews in the air, and weather that made it all possible. “It was quite an operation in the end,” he said. Still, it was harder than he expected.