Get the app Get the app
Already a member? Please login below for an enhanced experience. Not a member? Join today
News & Media Fly-by-wire

Too much responsibility for a machine?

Think your future flying won’t include a fly-by-wire (FBW) airplane? Think again. Technologically advanced airplanes (TAA) rolling off the assembly line with glass cockpits integrated with automatic flight control systems have only been around for a decade. Even the relatively short history of the simplicity, precision, and improved safety a FBW airplane offers means it’s only a matter of time before Cessna, or Piper, or Cirrus figures out how to replace cables and control rods with electrically controlled actuators to move the flight controls.

The improvement in GA flight safety should prove to be a strong motivator to develop a FBW system for a light aircraft, because the GA accident rate is so high. Those numbers continue to show that too many pilots are simply losing control of their airplanes—even TAAs—in a variety of weather conditions.

Because a FBW system is nothing more than a system of computers, they can be programmed to guarantee the aircraft will not exceed certain limits. This means that—theoretically at least—a Cirrus on downwind trying to make a tight turn to the runway with a quartering tailwind would be much less apt to become the victim of a stall/spin accident. Because those situations often occur when the pilot tries to add extra rudder to prevent an ever-steepening bank, the FBW system, sensing the big picture, simply wouldn’t allow the pilot to take that kind of action. Without the extra rudder, the aircraft blows through the final and the pilot hopefully is smart enough to recognize the situation and execute a go-around.

In another example, even the least-experienced pilots couldn’t slow a FBW aircraft below a predetermined safe airspeed on final. The computer would simply take control when it sees an approaching stall and push the nose over to regain speed. Of course, if that maneuver occurs close to the ground and the pilot fails to add power, the ground proximity warning system (GPWS) will sense the Earth rising up too quickly and issue a warning. What’s missing from a GA aircraft, at least for now, is an autothrottle system to provide the final piece of the puzzle and keep an airplane flying when the FBW system reacts to approaching danger. How an airplane reacts is, “all about how sophisticated the control laws are written to offer a particular level of flight envelope protection,” said Woody Saland, director of avionics programs at Dassault Falcon Jet in Teterboro, New Jersey.

Another aspect of the FBW system, which is built into the Dassault Falcon 7X, solves a problem many GA pilots would love to eliminate—the need to constantly trim the aircraft after configuration and power changes (see “Flagship Falcon,” page T–14). Because the 7X’s FBW system is completely integrated with the flight director (this also integrates the autopilot functions) and the autothrottles of the jet, a pilot need only move the sidestick and point the airplane where he wants it to go. The aircraft trims itself.

The automation is smart enough to realize that if the speed has already been set to 260 knots, pulling the stick back—which the FBW interprets to mean “pitch the nose up”—requires the autothrottles to increase power to maintain airspeed. It’s the same pitch and power phrase your instructor taught you in a Cessna 172 except the FBW system handles it all including trimming.

One of the true beauties of a FBW system like the 7X’s is that Dassault engineers thought long and hard about how to make sure every system on the airplane knows what every other system is thinking and doing at every moment of the flight. All that information means every system also supports the others with valuable information designed to make the aircraft fly more efficiently. Consider how the 7X uses the head-up display (HUD). If the pilot were hand-flying the aircraft (yes, they actually can fly without the automation), viewing the horizon through the HUD makes it easy to judge the difference between where the aircraft is aimed, and where it is actually heading.

Imagine trying to determine whether you’ll clear a ridgeline 10 miles ahead. The unaided human eye might say “maybe,” while the 7X flight control system using the HUD shows a horizon line that removes all the guesswork. If the hills are above the horizon line as the pilot sees them, they’re a danger. To escape, the 7X pilot has only to add back pressure to the sidestick and point the nose—and alter the flight path—to one in which the tops of the hills fall beneath the horizon. Voilà, obstacle cleared.

Fly-by-wire systems are not without their critics, of course. Consider the amount of movement of the sidestick needed to make a significant pitch change on the 7X, for instance. The movement is so minimal it would be tough to notice unless someone was watching the pilot’s hand closely. The issue in a FBW jet like the 7X or an Airbus aircraft is that the sidestick on the co-pilot’s side does not move when someone handles the stick on the opposite side of the cockpit. This has proven to be somewhat unnerving to those new to FBW and sure to be of concern should such systems migrate to light aircraft. Imagine a flight instructor unable to watch the movements of a student from the right seat.

In the large-aircraft flying world, specifically those people flying Boeings and Gulfstreams—aircraft that offer FBW systems, but are connected to a conventional control yoke—view this non-moving sidestick as a major stumbling block. To counter the threat some critics see, Gulfstream and Boeing retained not only the conventional control yoke in their newest aircraft, the G650 and the 787, but also kept dual control movement. When the left control wheel moves, the right does as well, making it easy, even in low light conditions for each pilot to know what the other is doing. While the G650’s FBW makes the controls feel light most of the time, the computer’s also able to add a heavier pseudo feel on those same controls when the aircraft slows down, even though the yoke can’t actually sense anything on its own.

Despite the computer laws written to protect the aircraft and its occupants, FBW computers are still machines; and machines can break—although most aircraft manufacturers offer at least triple-redundancy to avoid that possibility. For computer-phobes, though, this is still too much responsibility for a machine. Industry critics point to the Air France 447 accident that proved even the smartest computers can sometimes produce commands confusing enough that crews still lose control of their aircraft. 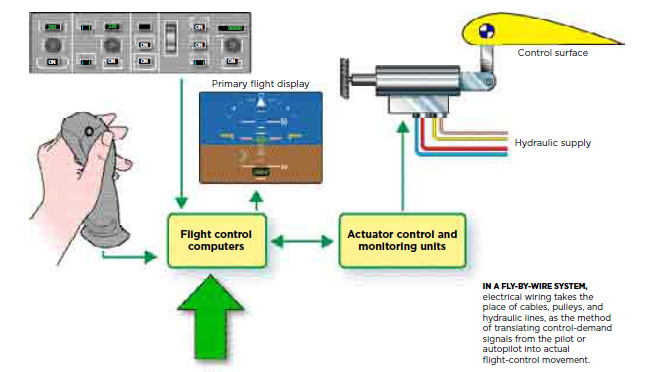 Rob Mark is a commercial pilot and CFI who also publishes the award-winning industry blog, Jetwhine.com.