Get the app Get the app
Already a member? Please login below for an enhanced experience. Not a member? Join today
News & Media Mentor Matters: Runway declared distances 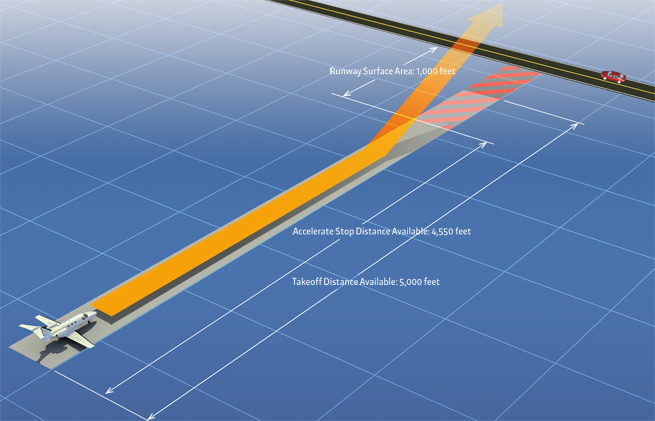 Previously we visited the concept of balanced field performance, and how jet manufacturers can use it to minimize the runway distance required for takeoff. By fine-tuning published V1 speed, accelerate stop distance (ASD) and single-engine takeoff distance (TOD) can be made to be equal. As the runway length required for takeoff is the greater of ASD or TOD, having ASD and TOD unbalanced (not equal) represents inefficiency, and ends up requiring more runway than if V1 were balanced.

There are times, however, when unbalancing takeoff performance can be the better solution for the pilot. This will be the case when specific physical areas outside of the runway itself, called stopways and clearways can, or must, be considered during performance calculations.

A stopway is an area beyond the takeoff runway meeting certain dimensional requirements designed to support the airplane during an aborted takeoff without causing structural damage to the airplane. A clearway, in contrast, is an area beyond the takeoff runway under the control of airport authorities over which an airplane can climb to the 35 feet above ground mandated by takeoff performance. It does not need to be able to support the weight of the aircraft, but it may not have terrain or fixed obstacles extending above specified limits.

The presence of a stopway or clearway will cause the accelerate stop distance available (ASDA) or takeoff distance available (TODA), respectively, to be greater than the length of the physical runway. They will also often make ASDA and TODA unequal, which means balancing field performance is no longer ideal.

V1 should be shifted so as to use all of the extra space available for rejecting or continuing the takeoff, as appropriate. For example, the presence of a stopway means utilized V1 can be increased above balanced V1. This may cause the ASD to increase past the length of the runway, but with the extra room designated for rejecting takeoffs available, this doesn’t present a problem. Raising V1 will lower TOD, so more weight can be added until TOD bumps up against the runway length again.

Of course, the issue is often more complex than presented, for a stopway may double as a clearway. Rather than require the pilot to perform the assessment and math, the FAA publishes runway declared distance information in the Airport/Facility Directory (AFD). Pilots can quickly evaluate runway length, ASDA, and TODA, and with performance software can optimize the takeoff for the actual conditions—not a theoretical balanced field.

Things become tricky when declared ASDA is less than the physical length of the runway, which in the United States is actually more common than the presence of a stopway. Key to understanding how an airport can have effectively have a negative stopway is the concept of runway safety areas (RSAs). As defined by the FAA, an RSA is an area at the end of a runway “intended to provide a measure of safety in the event of an aircraft’s excursion from the runway by significantly reducing the extent of personal injury and aircraft damage during overruns, undershoots, and veer-offs.” The FAA mandates a buffer surrounding runways, so that if a pilot underestimates how much surface is required, or because of poor technique doesn’t meet expected performance numbers, the penalty to life and limb can be reduced.

Unless an energy-absorbing Engineered Material Arresting System (EMAS) is installed at the runway end, the FAA requires 1,000 feet of RSA be present past the last bit of useable pavement. This area must be graded, drained, and—when dry—capable of bearing aircraft weight without damage to the aircraft. One thousand feet was chosen as a desirable safety buffer as in 90 percent of runway overruns the aircraft comes to a stop no more than 1,000 feet from the end of pavement.

Many airports are not able to either create a 1,000-foot RSA or install an EMAS at every runway end. In this case the FAA generally only allows for two options—to physically reduce the length of the runway until an adequate RSA is present, or to do so on paper by reducing the declared ASDA and/or landing distance available (LDA).For example, Runway 14 at Naples, Florida, is 5,000 feet in length, yet a road 500 feet beyond the runway end means the ASDA is only 4,550. A pilot not noticing this difference could conceivably depart at a weight that would cause ASD to be greater than ASDA, a regulatory no-no. Here, even though there is no stopway or clearway, the fact that ASDA and TODA are unequal would recommend the pilot consider unbalanced takeoff performance to maximize allowable takeoff weight.

The FAA’s stepped-up enforcement of RSA requirements is forcing airport officials to make difficult decisions. Where an adequate RSA does not exist, the airport authority must choose between expensive land acquisitions or EMAS installations, or shortening declared distances. While the latter is cheaper, it may reduce the effective runway length below a point that is useable to most jet traffic, a bad proposition.