Get the app Get the app
Get the latest news on coronavirus impacts on general aviation, including what AOPA is doing to protect GA, event cancellations, advice for pilots to protect themselves, and more. Read More
Already a member? Please login below for an enhanced experience. Not a member? Join today
News & Videos Room enough for all

When we start flying, many of us dream of the day when we can load up the entire family—including the dog, all the luggage we desire, and plenty of fuel for a memorable cross-country trip. Once we get about midway through ground school, a sad truth becomes apparent: Most four-place airplanes aren’t really four-place airplanes once you factor in full fuel and bags. They are, at best, three-place airplanes. And even the beefiest Cessna 182 cannot accommodate more than four individuals.

So what’s a pilot with a growing family—or a lot of good friends—to do? A six-place airplane may be the next logical step for ownership. And while the bigger airplane generally carries a bigger price tag and burns more fuel, today’s used aircraft market means there are good buys to be had, making the step up much more feasible. Let’s take a look at options offered by three manufacturers.

Beech: Queen of the six-seat fleet? The Bonanza A36 may be the airplane that comes to mind immediately when you think of six-seaters in the Beechcraft line. Introduced in 1968 as the 36, the retractable-gear A36 offers six full-size seats but limited baggage space in earlier models; this was increased in 1979 with the addition of a 70-pound compartment behind the rear seats. 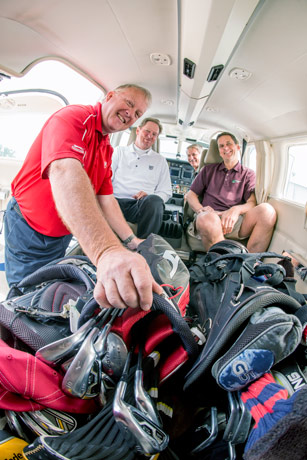 If that’s out of your budget, consider earlier Bonanza models, such as the S35. Produced from 1964 to 1965, the S35 has a useful load of 1,415 pounds, albeit with a shorter range of about 475 nm on 50 gallons. It can be modified to include forward-facing fifth and sixth seats in the aft baggage area, but if you don’t need those extra seats you’ll get a lot of baggage room.

You might even find a contender among Beech’s other singles. Take the Sierra—part of the Musketeer line—which comes in a six-seat configuration. You can remove the extra seats and have a large amount of space for bulky luggage such as bicycles; with a max useful load of 1,030 pounds, you still can carry along two or three passengers. You won’t get where you’re going in a hurry; cruise speeds average 135 knots at 75 percent power, but range is 620 nm. Prices start at $46,000 on Trade-a-Plane for a 1982 C24R.

Piper: Widebody Warrior. What could be simpler than calling your six-seat aircraft a Six? That’s what Piper did when it introduced the Cherokee Six (PA–32) in 1965. That model, more than four feet longer and seven inches wider than the standard PA–28 airframe, initially came with a 260-horsepower Lycoming O-540 that fell out of favor once Piper made available a fuel-injected 300-horsepower engine (PA–32-300). The Six became the Saratoga by 1980; the retractable version is called the Lance. Piper also briefly produced a model known as the 6X—a fixed-gear Saratoga—introduced in 2003, along with a turbocharged version called the 6XT.

AOPA chose a 1967 Six for a top-down revamp during its Win a Six in 2006 Sweepstakes. Although the extensive refurbishment took a full year, Editor at Large Tom Horne had no problems locating parts, thanks to the fact that Piper Aircraft stocked everything needed, even for a gal of the Six’s vintage.

Staying in the Piper family. Former Piper Cherokee owner Tim Applegate got the bug to buy another airplane. He knew that this time around, he wanted a faster airplane so that he and his wife could travel lengthy distances to visit friends and family. Applegate’s purchase of a Cherokee Six means he and his wife can fly from their home in Morris, Illinois, to Athens, Ohio, to visit their daughter in just two hours. What’s more, the Six is roomy enough to carry four friends, luggage, and golf bags.

Applegate dove back into the ownership pool in November 2012, buying a 1978 Six for $95,000. It had 2,300 hours, a good number considering that low-time airframes can be tough to find among load-hauling aircraft.

Well-kept, well-traveled, and equipped with a hodgepodge of avionics—a Garmin 530 along with King radios, transponder, and an inoperable ADF—the airplane’s slight exterior imperfections and 1970s-vintage upholstery prompted Applegate to consider some upgrades. Once he got started, like eating the proverbial first potato chip, he found it hard to stop.

Applegate purchased leather upholstery, side panels, and carpet from Airtex Products in Fallsington, Pennsylvania, then turned the airplane over to Euroair Aviation in Reedsburg, Wisconsin, for custom paint and interior installation. Then it was off to J.A. Air Center in Sugar Grove, Illinois, for a panel upgrade that added a 530W, a Garmin GTX330 Mode S transponder, a Garmin GMA340 audio panel, and a six-person intercom system, among other improvements.

“My buddy’s got a TBM 700 that we fly around in,” Applegate says. “It’s going to have essentially the same avionics. I just won’t go as fast.” Or spend as much on fuel; Applegate says he saw cruise speeds of 140 knots at 15 gph when he picked up the airplane in Wisconsin and flew it home to Morris, Illinois.

Even though he says he could have flown the Six another 20 years just the way it was, Applegate is pleased with the results of its transformation. “It’s the way I want the airplane and that’s the way I want to keep it.” He estimates he’ll have spent about $144,000 on an airplane that, new, would cost over a half-million dollars.

Cessna: Lots of options. When you move up in the Cessna line, there are several options beyond four-seat 172s and 182s. Starting with the Cessna 205, introduced in 1962, you have a six-seat, fixed-gear airplane with a 260-horsepower Continental IO-470 engine that can land virtually anywhere. In 1964, Cessna added the 206: a 205 airframe with 15 additional horsepower, thanks to a Continental IO-520 engine. Both models carry 65 gallons in standard fuel tanks, or 84 gallons if equipped with long-range tanks. 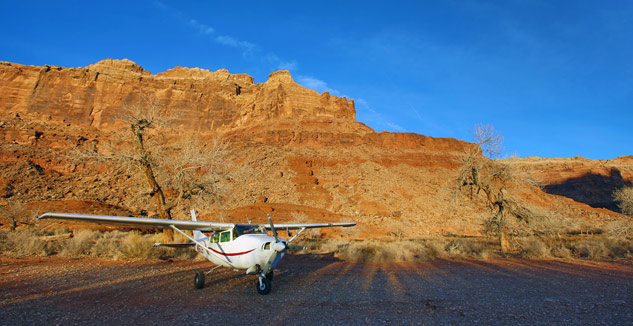 But enough about fuel—let’s talk about useful load. How does 1,500 to 1,800 pounds sound for the 205/206, depending on the model? That’s a lot of fuel, people, and camping supplies. The massive load capability is one of the reasons AOPA chose a 1976 U206F for its Aero SUV 1999 Sweepstakes airplane.

A former owner misses his 206. Mike Hart of Idaho Falls, Idaho, purchased a 1966 T206A in 2011 for $110,000. He had practical business reasons for acquiring such a workhorse—his communications agency had won a contract to take aerial photos of a nuclear power plant to be constructed in the state, and he planned to use it as a photo platform.

He also had personal reasons. Hart’s wife is “slightly claustrophobic,” he says, and hadn’t enjoyed flying with him in their previous airplane—an early model, somewhat narrow Cessna 182. What’s more, Hart says, the 206 was perfect for backcountry camping trips; he could easily transport up to five passengers plus a weekend’s worth of camping gear, water, food, and lawn chairs. He later removed the two rear seats so as to increase the amount of baggage space.

“I definitely did several full-gross trips in the backcountry,” Hart says of the 206, which he once flew into a 1,000-foot airstrip. The turbocharger gave the airplane a 25,000-foot service ceiling, meaning that it could haul “a ton and a half five miles up.”

Hart most likely would still be flying the 206 today if the recession had not delayed the power plant’s construction, ending the aerial photography contract. Hart sold the 206—and got $140,000 for it. Even taking into account the $30,000 he spent in upgrades, he realized a profit on the sale.

A Bonanza in the backcountry. The first airplane Scott Newpower bought was a Cessna 182, which suited him well for the backcountry airstrips he visits in Montana. When the 182’s engine reached TBO, he began thinking about moving up. A Bonanza hadn’t been on his radar until he heard about a 1964 S35 for sale in Helena. “I only knew what everybody else knows [about Bonanzas, which] is that they go fast,” he said. He bought the airplane in 2005 for $88,000. 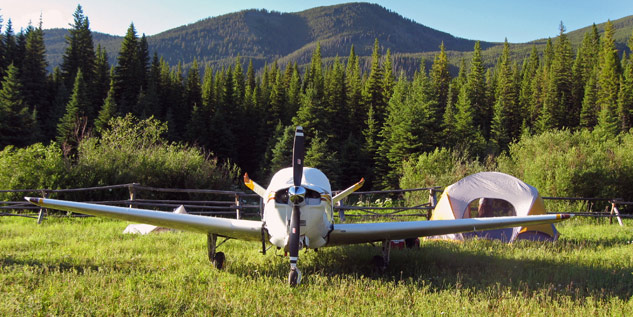 Newpower enjoys taking the airplane, a load of camping gear, and one or two passengers into the same backcountry airstrips he would visit in the 182. To do this, he keeps the Bonanza lean and mean. “Ninety-eight percent of the time I’m flying with just two seats in,” he says. “On the various annuals, if it ain’t nailed down I’m taking it out.” He has removed an old avionics shelf on the firewall, swapped out Goodyear tires for McCleerys, and replaced the propeller with a three-blade MT composite prop. “Everything I do has an eye toward ‘What does that weigh?’” he says.

Takeoff and landing numbers are foremost on Newpower’s mind. Flying without passengers, with 40 gallons of fuel, and at 5,000 feet density altitude, he says, the Bonanza can get off the ground in about 500 feet and can land in about 550. “It doesn’t need hardly any more runway than a 182 with the same load,” he says. When flying at lean-of-peak mixtures, he will see fuel burns of about 12 to 12.5 gallons per hour and true airspeeds of about 167 to 168 knots.