Get the app Get the app
Get the latest news on coronavirus impacts on general aviation, including what AOPA is doing to protect GA, event cancellations, advice for pilots to protect themselves, and more. Read More
Already a member? Please login below for an enhanced experience. Not a member? Join today
News & Videos IFR Fix: 'Probably just the gauge'

It’s a 161-nautical-mile leg on V178 between the Lexington (Ky.) and Bluefield (W.Va.) VORs, then a quick jog down two airways to Roanoke, Va.  Eastbound above an overcast, crabbed into a southerly breeze, turbulence increases near the ridges that straddle the Virginia/West Virginia state line.

On course, on altitude—but what’s this? The oil pressure gauge gets your attention; its needle is deflected low of normal. Oddly, there’s no rise in oil temperature to present a classic indication of engine trouble. Still, you wish you had paid closer attention to the engine gauges.

The chop elicits an exclamation from your instrument-rated passenger and doesn’t do much for your own morale. You’re almost overhead the Bluefield VOR, aware that Mercer County Airport is just a mile away.

Nobody wants to be alarmist—especially a relatively low-time pilot. On the other hand, this is not the first occasion on which you had to “squawk” this complaint; the FBO’s mechanic suppressed a smile and murmured, "Probably just the gauge." The next time you rented the airplane, it had a new gauge, and nothing further was said.

Now the combination of a new gauge and the same old indication presses you to choose between flying 60 miles further to your destination, or landing at the nearest airport.

It’s helpful having a qualified pilot beside you when you explain the situation and ask for assistance obtaining the amended clearance and reviewing the ILS or LOC RWY 23 approach. Your clearance to the HECKE fix will place you on a DME arc to the final approach course, not an unusual procedure above rugged terrain. (Can you find a minor typo on this IAP? Hint: It’s a small thing that may be hard to spot).

Looking over the approach as workload permits, you know to expect a tailwind on much of the arc, so you plan to slow down early. Fortunately the overall procedure is uncomplicated: Fly left turns around the DME arc, then turn left onto final. (From KEGLY, it’s all right turns.) Have you ever flown a DME arc that concludes with a turn in the opposite direction from the arc itself?

Your helpful right-seater doesn’t like the look of that oil-pressure gauge either, and thanks you for spotting it.

The vote of confidence boosts your spirits enormously, and as you tell everyone later, "The landing was routine." 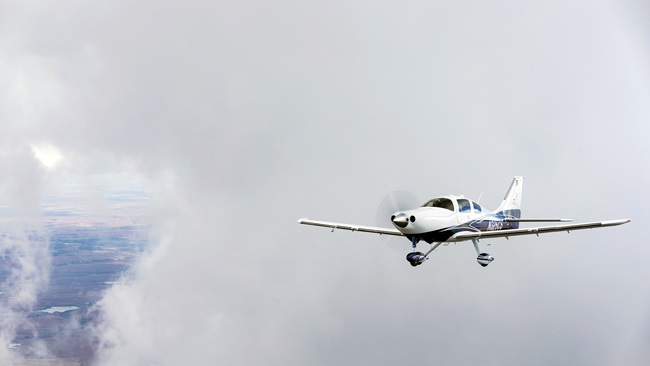 IFR Fix: The shape of ice