Questions covered everything from Customs searches to regional conferences 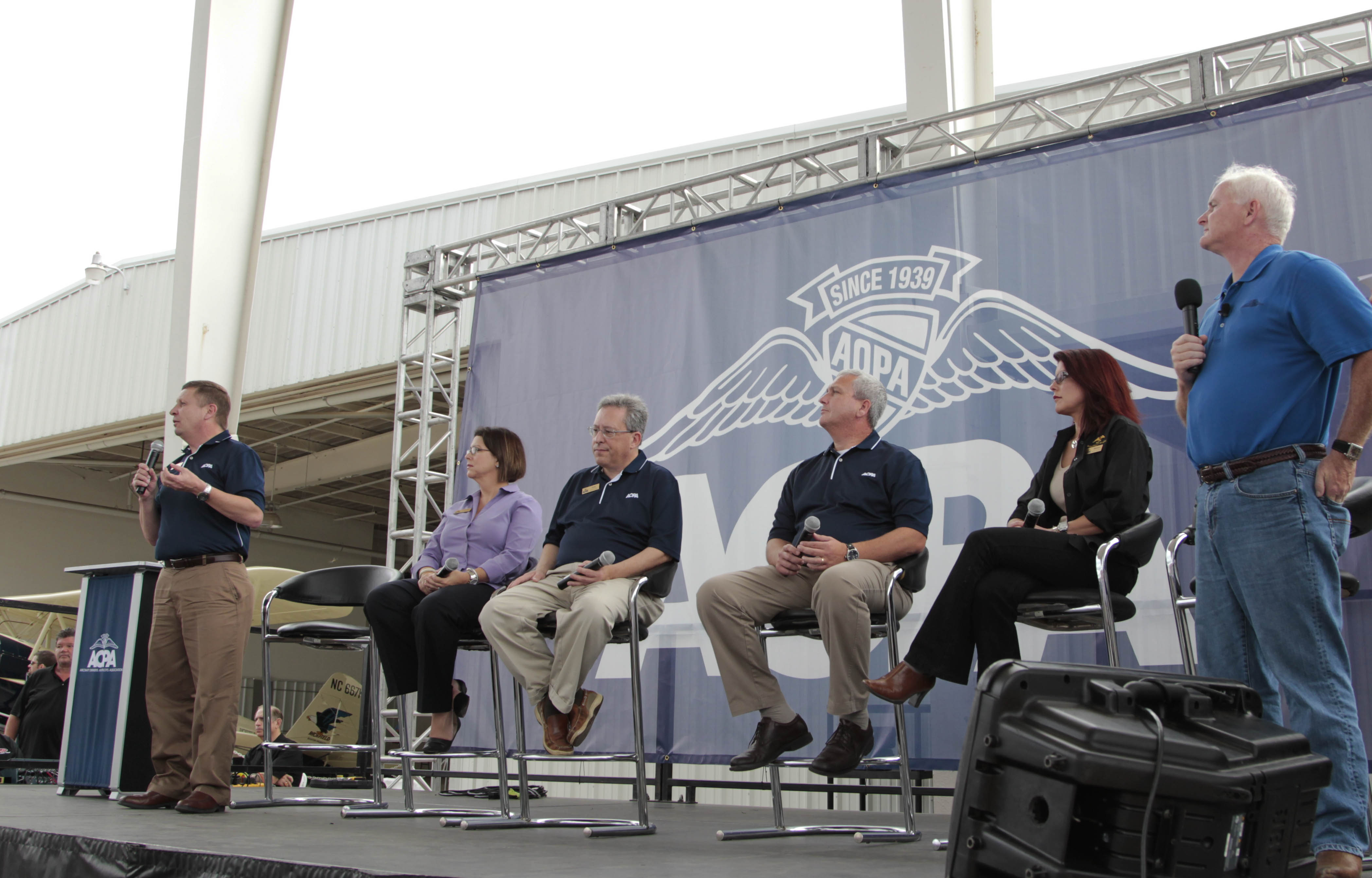 AOPA President Mark Baker and members of his executive team took to the stage at Airportfest at Fort Worth Meacham International Airport Oct. 12 to answer questions at a pilot town hall meeting. The questions from the audience covered issues including the new focus on regional events, Customs and Border Protection’s scrutiny of general aviation aircraft, the status of user fees, efforts to save GA airports, and how sequestration and the government shutdown are affecting GA. Below are the answers.

Question: What do airports do?

Baker: They allow people to move about the country in business, fun, and recreational ways. They hold a special place for me. They are fueled by the 300,000-plus aircraft that have been built in Wichita. Airports are just cool. (Baker weighs in on his love for airports here.)

Question: When will sequestration end?

Lorraine Howerton, AOPA vice president of legislative affairs: Nobody knows, which is sad. Even Congress, who should know, doesn’t. Congress sent a package to end the government shutdown to the president this morning, and he turned it down. House GA Caucus [co-chair] Representative Sam Graves (R-Mo.) was supposed to be here, but he’s in Washington waiting for a vote. It’s very frustrating.

Question: What is the status of  the 100LL avgas  issue?

Rob Hackman, AOPA vice president of regulatory affairs: The current supply of avgas we have is secure. A few years ago, industry came together to create a plan to transition over to unleaded fuels, and that group put together a blueprint. Our plan is to have a solution that causes the least amount of impact to the existing fleet and sustain the industry going forward. So far, it’s working, with the FAA on board in a leadership role. We need to ensure that fuels are economically viable and able to be used in the future. (View an AOPA Live interview with Hackman.)

Question: What is your position on AOPA’s usage of the CJ3 [jet]?

Baker: I’ve grown businesses in all 50 states. I see the CJ3 as a tool I can use to spend time with AOPA members, supporters, and our friends in aviation manufacturing. I want to make sure that we represent their products. But in the end, the CJ3 is a business tool and a time-saving machine.

Question: How can we get more youth to join AOPA?

Baker: We can do that by keeping airports alive, exciting, and fun. If you see a kid with a bike, go up and let them in. Show them your aircraft. It’s up to our members to do this. It’s not a campaign from headquarters or a fancy DVD. It’s up to all 400,000 of us to grab them and bring them to the airport. And we will do that as part of our local events in 2014.

Question: Which GA airports are the most threatened?

Greg Pecoraro, AOPA vice president of airports and state advocacy: We protect airports all over the country because there are always some under threat. We work hard to do away with those threats. In St. Clair, Mo., the mayor is anxious to close the airport, but the FAA tells him he can’t. But he keeps coming back. We’re standing firm in Norwalk, Ohio, where they want the airport to close and they’ve stopped funding it. We’re fighting in Biddeford, Maine, where city council members don’t understand the value of the airport. And members always ask us about Santa Monica Airport, the most encroached facility in the nation. The airport land was transferred to the city by the federal government, so they are perpetually obligated to keep it as an airport.

Question: What is AOPA’s latest action on the Customs and Border Protection search issue?

Craig Spence, AOPA vice president of operations and international affairs: We did a Freedom of Information Act request to ask why Customs was doing these searches. The question is why are they monitoring us in the first place?  What does CBP have to do with those doing VFR flights and not crossing a border? The latest is that the inspector generals for the Department of Homeland Security and the Department of Transportation are looking at why Customs is doing the searches and under what authority. But they are not considered essential employees, so we should know more once they get back to work. The good news is that Customs seem to have stopped the searches after we caught them with their hand in the cookie jar. As more comes to light, we can put a stop to monitoring once and for all.

Question: What is the strategy to stop user fees, what is the status, and what can members do to stop them?

Baker: This has been on the list forever, and we have no user fees.

Howerton: But we still have the proposed $100-per-flight fee in the budget. Two-hundred and twenty-three members of Congress sent letters to the president opposing user fees. We need to continue to show the value of GA and protect our freedom to fly. We can’t let it slip away. One thing that helps is our PAC. It allows us to meet with members of Congress in settings away from the office and gives us access to build a groundswell of support for no user fees.

Question: What is AOPA doing to make flying less expensive?

Hackman: The first thing we can do to help with the cost is to get more people flying. One way to do that could be through the efforts of companies such as Airworthy AutoGas LLC. This is an airport-to-airport business decision. Folks who are interested in buying auto fuel at their airports need to be engaged in proposing that business case. Next is to get the third class medical petition done. That's not just the hassle and expense of going in every two years. It’s also the cost of the hassle of the special issuance process. The FAA says that 99 percent of those who go through the process wind up getting their medical. And it’s also the effort to rewrite Part 23. That will help cut the cost of certification in half for new aircraft, with twice the safety. Plus it potentially gives us a path to adding safety equipment on the existing aircraft fleet. We have to ensure that owners have a viable path to upgrade their aircraft today.

Pecoraro: Another big cost is the taxes to fly. What we've been doing is to keep that cost as low as possible. States see aviation as low-hanging fruit, but not a single penny in new taxes has been raised via aviation taxes in five years. In many places, taxes are too high, so we work to cut taxes on aviation in states including Florida, Maine, Pennsylvania, and Ohio. Indiana had one of the highest taxes on fuel. We worked with the legislature to lower maintenance taxes and got tax cuts that lowered the price of avgas by 50 cents.

Question: Why did AOPA cancel its best event?

Baker: [Summit] is valuable, educational, and great for presenters and attendees. And we will continue to do this, but now we’ll do it six times a year. If it doesn't work, and if we don’t see thousands of members attending these regional events, we will come back to Summit at some time.

Question: What can members do to make the transition to the new regional format?

Baker: We will have the list of where the events will be by January. I hope that our members will rally and bring friends to educate them about GA.

Question: What will AOPA and GA look like in 20 years?

Baker: It’s up to us to make sure we can maintain GA in a fun, safe environment. We can have another 75 years of aviation if we invest in our members. It won’t be like the growth in the 1970s. But we can still have a robust aviation environment in the next 30 to 40 years.