Get the app Get the app
AOPA Members DO more LEARN more SAVE more - Get MORE out of being a pilot - CLICK HERE
News & Media SAM LS: Flying the mini T-28

Reminiscent of a Yak 52, or North American T-28 Trojan and T-6, the SAM LS light sport aircraft is the warbird of the LSA market.

The tiny polished-aluminum, low-wing aircraft looks out of place in the Sandpiper Aviation tiedown area at Fort Worth Meacham International where I’m meeting SAM Aircraft Founder Thierry Zibi. It’s parked near Citation jets, and Cirrus and Cessna piston aircraft. It’s the only aircraft sporting military-style accents, including nose art of a red sprite and “RSAF” (Royal Sam Air Force) on the fuselage surrounding the hallmark Canadian maple leaf. (The SAM LS and company are named for Zibi’s two-year-old son Samuel.) 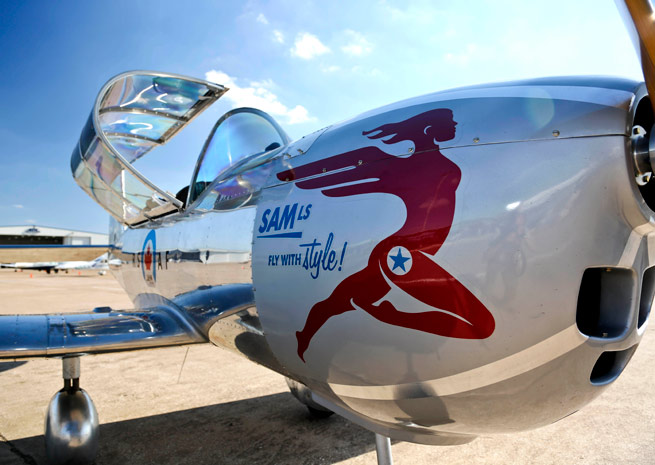 Design work for the aircraft began in France in 2008; Zibi incorporated the company in 2009 in Montreal, and started selling the aircraft as a kit in Canada in April 2013 under the advanced ultralight category.

The prototype that I’m flying made its maiden flight in February and is awaiting an FAA audit before being sold in the United States as a light sport aircraft. Zibi anticipates that it should take six to eight months for the aircraft to complete the FAA’s audit process. Until then, it is available as an experimental aircraft.

The SAM LS is fitted with a 100-horsepower Rotax 912 ULS engine, burns about 5 gph in cruise, holds 22 gallons of fuel (100 LL or automotive fuel), has a maximum cruise speed of 125 mph, and has a max weight of 1,320 pounds. The prototype is currently fitted with a wooden propeller sans spinner because Zibi was forced to replace the original propeller, a composite two-blade Sensenich, during his 19-hour, 1,800-nautical-mile flight from Montreal to AOPA Aviation Summit in Fort Worth. The wooden propeller slows the cruise speed to 115 mph and produces a climb rate of about 800 fpm.

The aircraft is designed for the pilot to fly solo from the front seat but can also safely be operated single pilot from the rear seat, Zibi says. With a nose that slopes 2 degrees down and the front seat located in front of the wing, the SAM LS offers excellent forward visibility on the ground and in the air. 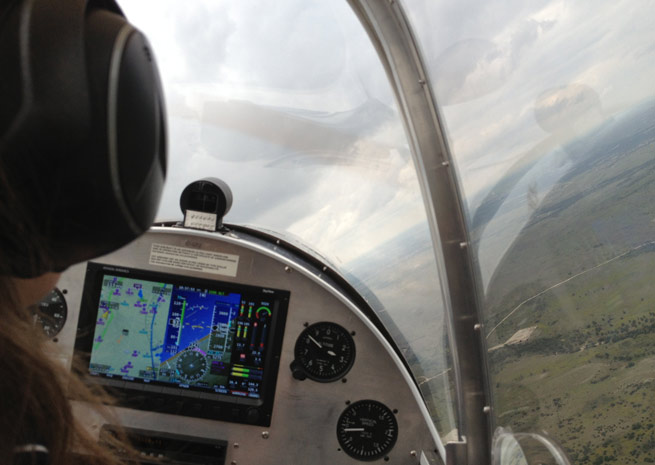 On the takeoff roll, the pilot must hold a little back pressure to bring the nose up slightly. The pressure is very slight, however, as I initially over-rotated on takeoff. The magic number, as Zibi put is, is 70 to 75 mph. That range covers the aircraft’s best rate-of-climb and final approach speeds. First 10 degrees of the electric Fowler flaps can be added at 90 mph; fully extended, the flaps reach 35 degrees.

The published data says the aircraft stalls clean at 49 mph and with full flaps at 42 mph, but I found the aircraft stalled about 3 mph slower for each. The stall characteristics are docile. The controls don’t get mushy in slow flight, and the aircraft gives the pilot ample warning of an approaching stall with the buffet. When the aircraft stalls, it barely pitches down. In uncoordinated stalls, it had no tendency to spin, and recovery was quick with slight release of back pressure. The aircraft’s elevators have stops at 20 degrees up and down.

Zibi and engineers spent 15 hours redesigning the aircraft’s ailerons after the maiden flight because they were not aerodynamically balanced. They made the trailing edge of the ailerons thicker to solve the problem. On the flight around Fort Worth, the controls felt balanced. Trimming the aircraft for pitch and flying hands off, the aircraft had no tendency to bank left or right. The SAM LS rolls crisply into and out of steep 45- to 60-degree bank turns and requires almost no back pressure to maintain altitude. 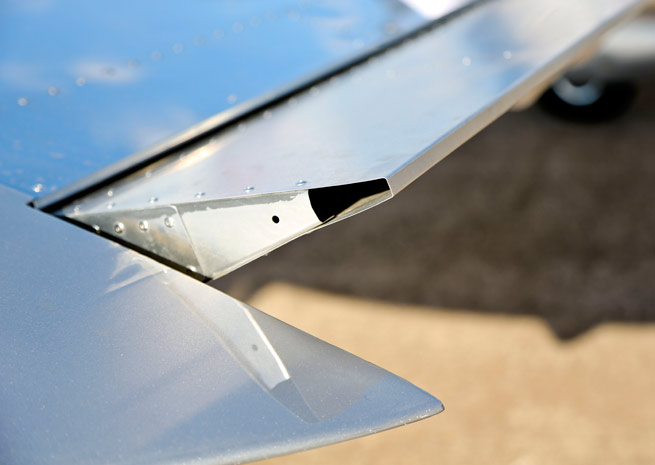 During a high approach to landing on Runway 16 at Meacham, the SAM LS slipped easily with 10 degrees of flaps. Zibi says that he has slipped the aircraft with 25 degrees of flaps but not full flaps.

For pilots who enjoy flying low and slow in an open cockpit, the SAM LS’s canopy can be detached with three pin releases. Just anticipate about a 10-mph reduction in cruise performance, Zibi says.

While the SAM LS isn’t the easiest aircraft to enter—the pilot must step up onto the wing and then over the fuselage onto the seat or floorboard like an Ercoupe—it is comfortable once seated inside. Zibi had an ergonomics specialist design the seats. For a 5-foot, 6-inch pilot, the 26-inch wide cabin is roomy enough to not feel claustrophobic or bump into the sides of the fuselage. The throttle is located on the left, just in front of the leather-covered armrest, making it comfortable to rest the hand on the control. Unlike side-by-side LSAs, this tandem-seat aircraft lets the pilot put his or her feet on rudder pedals straight in front instead of angled slightly in toward the center of the aircraft. The low-wing, bubble canopy combination offers excellent visibility (especially for the front-seat pilot in front of the wing), unlike some high-wing LSAs in which the pilot looks left or right directly into the wing root.

The SAM LS costs $131,000 with standard equipment including the Dynon SkyView glass panel, the Garmin G1000 of the LSA market; a forward baggage compartment; and leather seats. The kit costs $23,200, Zibi says. The aircraft comes standard with one of three paint schemes: polished aluminum with military accents, blue and white paint to look like the T-28 Trojan, or yellow-and-black to look like the AT-6. An optional baggage compartment can be added to the fuselage aft of the cockpit.

For those who want to fly low and slow, enjoy the look of military warbirds, and don’t want to be crowded by a passenger or co-pilot seated beside them, the SAM LS could be right up their alley.