Get the app Get the app
Already a member? Please login below for an enhanced experience. Not a member? Join today
News & Media Epic LT: Seeing is believing

Buckle up and hold on

The Epic LT’s sleek looks aren’t deceiving. The six-seat, 1,200-horsepower kitbuilt speedster is all about going fast and far—and from the slingshot acceleration at takeoff, to its 4,000-fpm initial rate of climb, to its 320-knot cruise—performance is paramount.

“It’s amazing what happens when you bolt a big engine on a light, aerodynamically clean, carbon-fiber airframe,” says Rich Finley, Epic’s chief pilot, who oversees aircraft engineering, flight testing, and pilot training. “You get performance that has to be seen to be believed.”

The Epic LT weighs 4,400 pounds empty, and on the day of our demo flight it was loaded with four adults, baggage, and 200 gallons of fuel, putting our takeoff weight at 6,500 pounds, or 5.4 pounds per horsepower. That’s slightly better than a P–51 Mustang, which typically operates at about 6.2 pounds per horsepower.

Taking Runway 13 Right at Seattle’s Boeing Field, Finley calls for 12 degrees flaps, trim set, and door seals inflated. Holding the brakes, I advance the power to a gas generator rotation speed (NG) of 80 percent and 80 percent torque, and watch the airspeed display on the Garmin G900X PFD as it quickly counts up to our rotation speed of, you guessed it, 80 knots.

The four-blade Hartzell prop digs into the thick sea-level air with Jack the Ripper savagery as it growls to its maximum 1,700 rpm, and the forward lunge is accompanied by a predictable left-turning tendency that’s easily counteracted with the LT’s authoritative rudder. At rotation, light back pressure on the yoke lifts the nosewheel; a touch more rudder pressure is required as the main gear leave the ground, and I pitch for a 10-degree climb angle.

The airplane accelerates to 130 KIAS as the landing gear comes up, and at 800 feet agl I raise the flaps, lower the nose to a five-degree pitch attitude, and watch the airspeed rise to 180 KIAS—the LT’s favored cruise-climb speed at low altitude. Vertical speed is steady at 3,400 fpm as we engage the TruTrak Sorcerer autopilot on our way up to 27,000 feet on this slightly warmer than standard-temperature morning.

It takes 11 minutes to reach FL270, and when we get there, the Epic is still going uphill at 1,600 fpm. After a few minutes in level flight, the airplane is traveling 317 KTAS (202 KIAS) while consuming 52.5 gph of jet fuel with a cabin altitude of 6,900 feet (6.5 psi pressurization differential). Engine temperature is the limiting factor with ITT at 760 degrees, the top of the green band.

The airplane we’re flying, N600DB, is an Experimental, amateur-built kit airplane, the nineteenth of 42 Epics registered and flown since the company was formed in the early 2000s. Now, Epic Aircraft is focused on FAA certification for the LT and plans to deliver its first completely factory-built airplane in 2015. “There are slight differences and idiosyncrasies in each kit airplane based on the individual builder’s preferences,” Finley says. “We’ll have an entirely new level of standardization in our production airplanes.”

We’re headed to Epic’s home base at Bend, Oregon, and the icy crest of Mt. Hood and the solitary peaks of the Cascades soon come into view. Bend is located in the high desert just east of the mountains, and the area’s recent history in composite aircraft manufacturing has been a harrowing roller coaster ride. 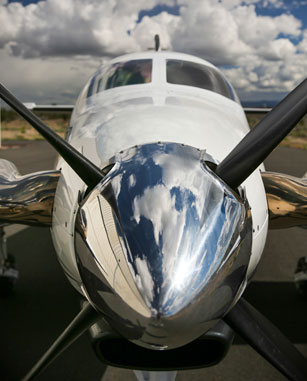 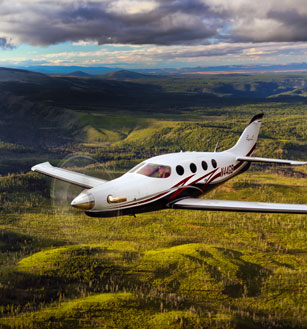 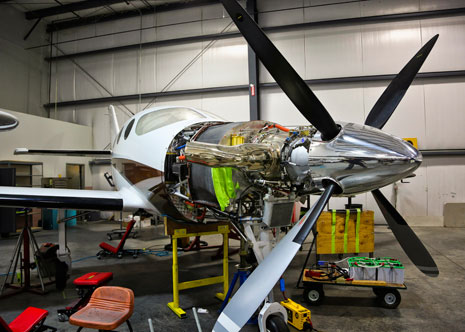 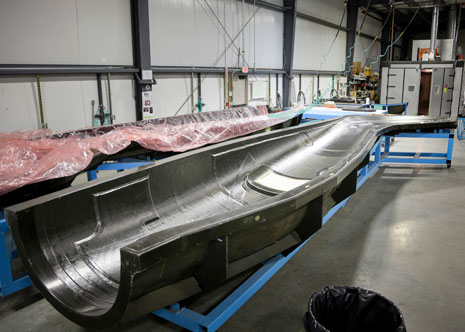 With an initial climb rate of 4,000 fpm, the Epic gets into the thin air quickly, and with up to 300 gallons of fuel—and a cruise speed of 300 KTAS—it can cover the distance. 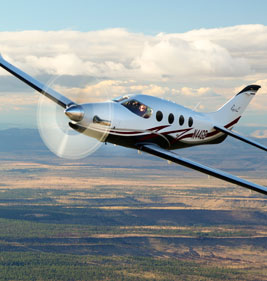 Lancair built a state-of-the-art composite aircraft manufacturing center for its FAA-certified Columbia in Bend, then sold it to Cessna, which revamped and renamed the airplane Corvalis; shut down the Bend facility; and moved production to Kansas. (Lancair still manufactures its Evolution and Legacy kits nearby in Redmond, Oregon.)

Epic recently purchased the 200,000-square-foot former Cessna facility in Bend and was busy moving into the vacuous building complex at the time of our June visit. And Epic’s path to get to this point has been full of twists, turns, struggles, and drama.

The company rapidly developed a series of exceptionally high-performance Experimental aircraft in the mid-2000s ranging from the five-seat, turboprop Escape to the Victory very light jet. The company also teamed up with Farnborough Aircraft on its Kestrel turboprop prototype (Epic built the wings and other components), but those arrangements soon devolved into lawsuits and recriminations. Farnborough has since become Kestrel Aircraft and is in the process of certifying its own single-engine turboprop.

Epic kitbuilders struggled to obtain parts and factory support, and Epic entered bankruptcy court protection. A group of Epic builders eventually obtained the rights to the LT design and sold the company in 2012 to Engineering LLC, a privately owned Russian firm that is underwriting the ongoing certification effort.

Doug King, Epic CEO and an LT builder and pilot, said the company is finally on firm financial footing and has the resources it needs to accomplish its goals. “Certifying a new airplane and getting it into production are big tasks, but we’re well on our way,” said King, an energetic, personable, and direct executive with a varied business background that includes managing Silicon Valley technology start-ups and a California aircraft refurbishment center. “We’ve got a fully funded program so I don’t have to go out and beg for money. I absolutely love our product, I’m passionate about it, and it’s just an exceptional airplane.”

King said Epic will continue to produce kits as well as finished, FAA-certified aircraft. Kits will carry a retail price of $1.95 million and factory-made LTs will sell for $2.75 million. Parts will come from the same molds and ovens, but the airplanes will be assembled in separate buildings.

King said Epic plans to produce 25 LTs in its first full year of factory production and about 50 a year after that. The company currently has 75 employees and expects to hire more as demand warrants. The company has learned a great deal from real-world experience since its airplanes have logged many thousands of flight hours, King said. “The concept of taking an Experimental airplane and certifying it has a great deal of merit,” he said. “We’ve got lots of hard-won knowledge and we know what works in manufacturing and in the field.”

King said his own airplane was nearly complete when the original company went bankrupt and he found himself out nearly the entire $1.6 million he’d invested. That bitter experience has helped him empathize with other former owners who feel like they, too, were left holding the bag.

“I know how they feel because I was right there with them,” King said. “Today we’re a new company with a proven product and no legacy finance problems. We’re well capitalized, and we have realistic expectations for what it’s going to take to accomplish our goals.”

He said Epic officials briefly considered changing the company’s name after the bankruptcy in an effort to put that bruising experience behind. But in the end they decided to stick with it. “The main question I get when I’m out flying is, ‘What kind of airplane is that?’” said King, who has logged over 500 hours in his own LT. “That tells me we have an opportunity to define ourselves and our brand based on our own performance.”

For a simulated emergency descent, Finley clicks off the autopilot and brings the power lever back to idle. Leaving the prop full forward, I pitch the nose down 25 degrees as airspeed rises to 250 KIAS (VNE is 280) and the descent rate exceeds 8,000 fpm. The non-RVSM airplane is limited to a ceiling of FL280, so an emergency descent from that altitude to 14,000 feet can be accomplished in well less than two minutes.

A simulated engine failure with the prop feathered and the flaps and landing gear up provides a sailplane-like 17:1 glide ratio. That’s enough to cover more than 85 miles from 28,000 feet.

The elliptical LT wing has a swept, scimitar-shape leading edge, yet slow flight at 80 KIAS at idle power with the flaps and landing gear up is stable and positive. The full-flap, power-off stall speed on this airplane is listed as 68 KIAS, but we didn’t perform full stalls on this demonstration. “We’re not concerned about pilots inadvertently stalling the airplane,” Finley said. “There’s plenty of aerodynamic warning, and we’re looking at a stick-shaker and stall avoidance systems for the certified airplane.”

The G900X avionics suite is essentially a G1000 without the autopilot—and an integrated autopilot would be a valuable addition to the LT. Without automatic trim, or manual trim wheels, the pilot must stay on top of the required changes in rudder, elevator, and aileron trim pressure throughout the LT’s broad speed range. Lancair’s Evolution, an Experimental four-seat turboprop and LT competitor, offers Garmin’s integrated autopilot, the GFC 700, as standard equipment—the only kit aircraft maker to do so.

Approaching Bend Municipal Airport’s Runway 34 for landing, I lower the gear and add 12 degrees of flaps below 180 KIAS. Downwind at 150 KIAS, full flaps (30 degrees) and 20 percent torque slow the airplane to 130 KIAS in level flight at 1,500 feet agl by midfield, slowing to 95 KIAS as we turn base. I modulate the torque between 15 and 20 percent on final to maintain 95 KIAS, then wipe off the power about 150 feet before crossing the runway threshold and decelerate in a nearly flat attitude until touching down on the trailing-link main gear at 74 KIAS. Moving the power lever back over the idle stop and into Beta, and light braking, brings the LT to a stop after a ground roll of 1,500 feet.

“This airplane flies as fast as a Citation 500 on half the fuel, and it can get out of any runway that a Cessna 182 can,” says Finley, a former Navy F-4 Phantom pilot and U.S. Naval Academy grad. “It’s more demanding than most piston singles. Pilots who are willing to apply the same discipline and intellectual effort that they use in their day jobs can expect the same kind of success.”