Get the app Get the app
News & Media High-altitude aerodynamics 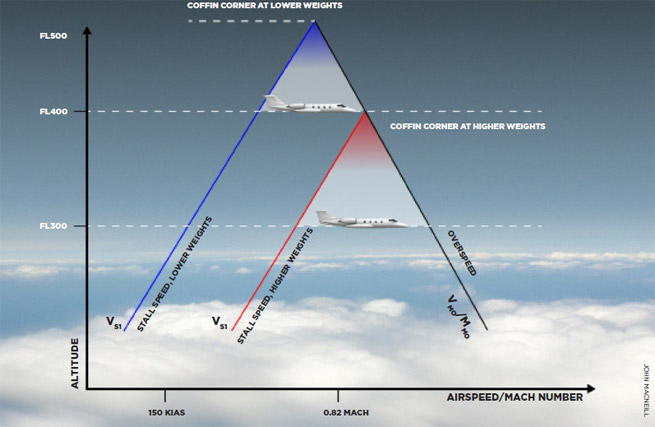 In its simplest form, the aerodynamics surrounding an airfoil’s ability to generate lift rests on one simple concept—never exceed the critical angle of attack. The problem though, is that understanding the angle at which a wing may stop acting as a lifting body isn’t always apparent to new pilots, and sometimes not even to experienced ones, especially when they’re flying around in the stratosphere. To make sense of high-altitude flight, we need to dig a bit into the science behind what makes an airplane fly in general—besides, of course, money.

Consider angle of attack for starters, that arc measured between relative wind and the chord line of the wing; an imaginary line running from the wing’s leading to tailing edge. Relative wind is defined as the air moving parallel to, but opposite in direction to the wing’s direction of travel. Where the wing is pointed then is not important, only where it’s pointed relative to the air passing across it. Even with the nose pointed up, for instance, the angle of attack could still be low, assuming the engine is rather robust of course.

The easiest way for a pilot to control angle of attack is by reducing or increasing backpressure on the control wheel. Increased angle of attack translates into additional lift but not forever. Increase the angle of attack too much and air stops flowing smoothly across the wing, lift evaporates and the airfoil stalls.

The resulting angle of attack was so great, the wing stopped flying and because the crew took the wrong actions, the aircraft simply fell 37,000 feet into the waters of the South Atlantic.

From an aerodynamic perspective, the A330’s wing stopped flying because no one holding the control stick reduced the angle of attack, just as if the stall had occurred in a Cessna 152. The physics required to return any wing to flight do not vary by aircraft size, nor does whether the aircraft is flying in VFR or IFR conditions have any effect. The only way to make a stalled wing fly is to reduce the angle of attack.

Flying down low in the thicker air and slower airspeeds of training airplanes, new pilots are taught to recognize a nose-high attitude that represents the danger area of a near stall. We even teach students to memorize indicated airspeeds and configurations—such as on approach—at which a training aircraft is most likely to fall prey so they’ll avoid, or at least become acutely aware of those situations.

But for pilots flying at high altitudes where the atmosphere is thinner and swept-wing airfoils perform differently, we simply don’t teach pilots what to expect should a stall occur since we always believed the chances of a stall at 37,000 feet were slim to none. For professional pilots often trained in full motion simulators, accurately reproducing stalls up high was near impossible anyway.

Simulators are simply computers and they require accurate data to reproduce any flight regime. Unless the manufacturers spend time stalling the Falcon 7X up high, there’s no data to feed the simulators. So at stratospheric altitudes—above 30,000 feet—where the air is thinner and wings are much less responsive, stall recognition is not easy for instructors who never experienced it themselves to explain.

But the threats up high do exist and any pilot planning to venture above 25,000 feet would do well to learn that flight in the stratosphere requires working knowledge of what are often decreasing safety margins above the stall.

While violating just one safety margin probably won’t bring down a jet, pile them up as the Air France crew did for some as-yet-unknown reason, and the results can be tragic.

For instance, the angle of attack necessary to maintain level flight in thin air is greater than down low, which brings the angle of attack just a few steps closer to the critical. Indicated airspeed, a guide most pilots use down low for stall avoidance, is useless because the thinner air makes the standard airspeed indicator inaccurate.

Aircraft might well be flying with a true airspeed of 450 knots, yet indicate only 210. That’s why pilot-speak up high includes Mach numbers that more accurately represent the ratio between true airspeed and the speed of sound.

More power is often not available to push the airplane through the stratosphere either since engines are running pretty much full speed at high altitude anyway, especially if the outside air temperature (OAT) is higher than normal. High-altitude flight planning means recognizing the aircraft’s weight at all times to prevent trying to force an airplane higher with a climb when it’s incapable of doing so safely.

Turns at high altitude also demand additional respect because of load factor. In general, turns at heavy weights are kept shallow to avoid requiring too much backpressure to maintain altitude, which also reduces the margin to a stall.

Thinner air and reduced power combination also changes a pilot’s reaction to turbulence. Simply adding backpressure to climb away from the bumps might mean trading off a slow increase in altitude for an ever-decreasing safety margin above the stall.

Finally, consider all of what might at first seem like minor high-altitude restrictions to flight with an aircraft pitching about and the pilots hand-flying because the autopilot can’t stay ahead of the pitch and roll changes because of turbulence and an already reduced safety margin above critical angle of attack can completely disappear.

Digging deeper into aerodynamics is a must for anyone piloting an aircraft at high altitudes, especially when you realize the real tragedy of the flight of Air France 447.

If any of the three pilots had recognized the stall for what it was despite all the other alarms they were being bombarded with and reduced backpressure on the A330’s control stick reducing the angle of attack, the Airbus’ wing would have again started flying.

Robert P. Mark is the editor of the award-winning aviation blog JetWhine.com.