Get the app Get the app
Already a member? Please login below for an enhanced experience. Not a member? Join today
News & Media Avionics: David comfort

David Clark departs from the pattern 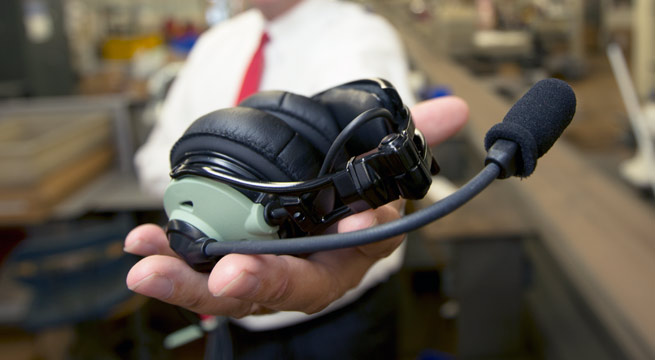 It is not a stretch to say you can forget you are wearing it. That, said David Clark Co. Executive Vice President Richard M. Urella, is both the “highest compliment” received from testers, and the point. The new model, a radical departure in many ways from David Clark headsets before it, is the company’s response to every pilot who has ever worn a tight-fitting headset for more than a couple of hours at a time—and found themselves lifting it off each ear in turn for a few seconds of relief from pressure and pent-up heat.

Trading clamping force and a full ear cup for a much smaller, on-the-ear design proved significantly more comfortable (the point), and also suited to take advantage of new circuitry dubbed hybrid electronic noise-cancellation. Inverting sound waves collected by microphones mounted both inside and outside of the ear cup, the system combines two audio signals to reduce noise to the ear by 30 decibels—the limit, Urella said, of what is possible.

“Your body will actually bring noise to your inner ear at 30 dB,” Urella said. “So there’s only so much you can do.”

Over the course of several days, with dozens of hours logged in a variety of aircraft—with help from certificated flight instructors Terry Keller Jr. and Tim Chase of Premier Flight Center in Hartford, Connecticut—the DC PRO-X was tested with its sophisticated circuits on and off, and proved comfortable and effective either way—although activating the electronic controller certainly reduces noise.

The ear seals have a relatively small hole, and the “sweet spot” for the headset is found when the opening lines up with the opening in the ear. Once in the right spot, the seals are soft enough to shape to contours and close off “leaks” in the sound protection. A wiggle or two may be needed to get the maximum benefit.

The Bluetooth interface (another first for David Clark) available on the DC PRO-X relayed music with perfect clarity, instantly cutting music volume whenever the radio or intercom activated, then slowly fading back in after those prioritized transmissions ended.

Cellphone calls were a slightly different story, albeit in a very small sample of attempts: Some, although not all, of those called (using a Motorola DROID RAZR M) reported a degree of distortion or interference, though the pilot—safely stopped—was consistently understandable. Sound from the other end of the call takes about three seconds to fade back in after the pilot stops speaking, by design, because of intercom activation. That led to missing a few words when the person on the other end of the line picked up speaking where the pilot left off.

Chase reported occasional “pops” during ground operations with doors and windows open and electronic noise cancelling active, a phenomenon he said was identical to his David Clark X11. Turning off the electronic cancelling solved this, and Chase reported no such issues in the air. Keller described his longstanding preference for full-coverage headsets that clamp down hard for maximum passive protection in case the battery dies.

“However, the DC PRO-X made me a believer,” Keller said. “It is very comfortable to wear, and based on the performance I am quite sure I wouldn’t miss my H10-13X.”

Smaller ear cups allow more air to circulate, and the ear seals remain clear of eyeglass frames as well. Weighing about 7.5 ounces, with 0.4 pounds of clamping force from the well-padded magnesium headband, the DC PRO has a way of disappearing.

Eyeing both general aviation and air transport markets, the company has secured technical standard order approval, aiming to produce a headset pilots can use—and enjoy—from first flight to wherever wings may take them.