Get the app Get the app
News & Media Quick Look: Citation X

Seats | up to 9 passengers 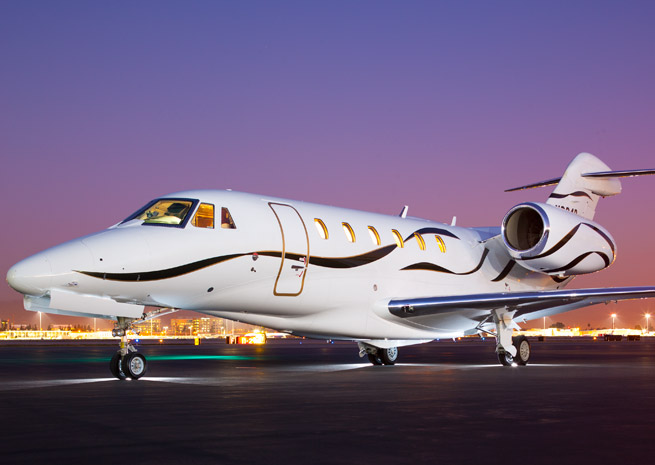 Cessna says The Citation X is the world’s fastest business jet, capable of flying from New York to Los Angeles in about four hours. Announced in 1990, the original aircraft was powered by two Rolls-Royce AE3007C engines rated at 6,442 pounds of thrust each, giving the airplane a maximum cruise speed of Mach 0.92.

While the cabin cross-section was derived from the Citation III, the Citation X featured an all-new, highly swept (37 degrees) supercritical wing and the five-tube Honeywell Primus 2000 avionics system. Typical passenger seating configurations are eight chairs in a double-club arrangement, or six seats with a three-place divan aft.

The Citation X first flew in December 1993. FAA certification was received in June 1996. The initial customer airplane was delivered later that summer to golfer Arnold Palmer, who shortly thereafter used his airplane to set a speed record. For producing such a high-speed airplane, the Citation X design team won the Collier Trophy for the greatest aeronautical achievement in the United States in 1996.

In 2002, starting with serial number 173, Cessna introduced an enhanced version of the Citation X that featured an increase in gross weight and the five-percent-more-powerful AE3007C1 engine, along with additional standard equipment such as a Honeywell TCAS II and EGPWS. In 2008, Cessna and Wichita-based Winglet Technology, LLC flight-tested an elliptical winglet retrofit for the Citation X. The first winglet-equipped airplane was delivered in September 2009. Winglet benefits include increased speed, improved hot day/high altitude performance, greater range, higher initial flight levels, reduced time to climb, and lower fuel consumption.

Starting with 2011 models, new Citation Xs were delivered with Honeywell’s Primus Elite system, which replaces the Primus 2000’s five CRT displays with high-resolution LCD screens. In October 2010 Cessna announced the latest version of the Citation X, which initially was designated Citation Ten, but has since reverted to the previous designation. The upgraded model’s fuselage has been stretched 15 inches, creating more legroom in the cabin. The new aircraft will have a higher gross weight (36,600 pounds), about 200 nautical miles more range, elliptical winglets as standard, an upgraded electrical system, autothrottles, a larger cabin with new seats, and the Cessna Clarity cabin management system.

The new Citation X also will include the Garmin G5000 avionics suite, which has three 14-inch (landscape configuration) flat-panel screens and a variety of advanced features. An upgraded powerplant—the AE3007C2, which is rated at 7,034 pounds thrust—will improve cruise and climb performance and, most notably, enable the new Citation X to once again become the fastest business jet, with a speed of Mach 0.935 (compared to Mach 0.925 for the Gulfstream G650).

The new Citation X first flew in January 2012, and certification is expected later this year.

More than 300 Citation Xs have been built. NetJets is the largest operator of the Citation X. Other fleet operators include XOJET and Flight Options. According to Vref, Citation X values vary considerably, from $4 million for a 1996 model to $18 million for a 2012 model.