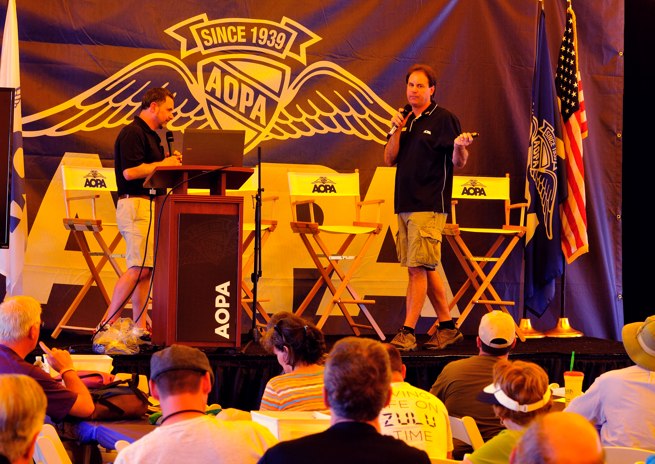 A seminar about automatic dependent surveillance-broadcast (ADS-B) traffic—specifically explaining what pilots do not see when using portable ADS-B receivers—drew more than 70 pilots to the AOPA forum tent at Sun ’n Fun in Lakeland, Fla., on April 2.

Because portable ADS-B devices are receivers only (ADS-B In), they do not provide ADS-B Out capability, stressed presenters Steve Podradchik, CEO and co-founder of Seattle Avionics, and Eric Rush, an AOPA enterprise architecture specialist who has flown with portable devices.

This is significant, because ADS-B traffic data is broadcast only when an aircraft with ADS-B Out capability is in the area of a ground tower—an ADS-B Out transmission is required to trigger ADS-B In data transmissions from the ground. “This is super, super important to know,” Podradchik said.

And even when another aircraft is broadcasting ADS-B Out transmissions, the ADS-B In data broadcasts that they trigger may not alert you to traffic close to your position. That’s because ADS-B traffic data is customized for each aircraft requesting it. The data returned in response to an ADS-B Out transmission will provide traffic within a defined area surrounding the requesting aircraft—which means within a 15-nautical-mile radius (or 30-nm diameter) of the requesting aircraft, centered on its position, and extending 3,500 feet above and below its altitude.

That point was driven home dramatically to Rush. “I am an ADS-B In aircraft. I have not spent the money to upgrade to ADS-B Out,” he reminded the audience. He was watching an ADS-B target displayed on his iPad, several miles away, when he looked up to see an aircraft pass just in front of him—at his altitude. “This happened to me. We were close enough to wave.

“That’s the problem. There could be a guy right off my wing tip that my attention is being diverted from,” Rush said.

An absence of traffic on your iPad display from an ADS-B In receiver could mean one of three things, they said. First, your iPad might not be properly connected to your ADS-B receiver. Second, there may not be any other aircraft out there. Third, there could be aircraft flying in the vicinity—it’s just that none of them have ADS-B Out capabilities. 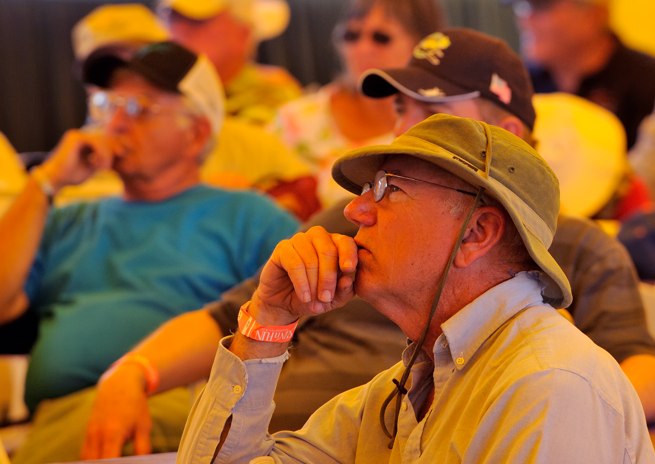 The current version of AOPA’s FlyQ electronic flight bag, version 1.3, supports ADS-B traffic and can present a limited picture of actual aircraft traffic. Traffic visibility will improve as more aircraft equip with ADS-B Out hardware to comply with the FAA’s approaching 2020 mandate—and as the ADS-B coverage area continues to improve. However, they stressed, a portable ADS-B In receiver does not bring your aircraft into compliance with the 2020 requirement.

“The mere fact that you don’t see anything is misleading. In fact, it’s dangerous,” Podradchik said. “Remember, guys—it’s aviate, navigate, and communicate—not look at your iPad. I’m an evangelist on this.”

Technical Editor
Mike Collins, AOPA technical editor and director of business development, died at age 59 on February 25, 2021. He was an integral part of the AOPA Media team for nearly 30 years, and held many key editorial roles at AOPA Pilot, Flight Training, and AOPA Online. He was a gifted writer, editor, photographer, audio storyteller, and videographer, and was an instrument-rated pilot and drone pilot.
Go to Mike Collins's Profile
Topics: Sun 'n Fun, Events, Avionics