Get the app Get the app
AOPA Members DO more LEARN more SAVE more - Get MORE out of being a pilot - CLICK HERE
News & Media President's Position: What’s past is prologue

President's Position: What’s past is prologue

Setting the stage for the next 75 years

Most of us weren’t born in May 1939 when a handful of pilots gathered around a table to formalize a commitment they’d long since made—to protect the freedom to fly.

Most of us weren’t born in May 1939 when a handful of pilots gathered around a table to formalize a commitment they’d long since made—to protect the freedom to fly. Their concerns were immediate. Europe was going to war and, if history was repeating itself, the United States wouldn’t be far behind. They needed to act swiftly to keep private aviators in the air. And they did, making a promise—to one another, to the general aviation community, and to future generations—to fight for the freedom to fly. Every one of us flying today is the beneficiary of their actions.

In 1939, there were only 13,217 active general aviation airplanes, compared to more than 220,000 today. And at the end of that first year, AOPA had 2,000 members—a fraction of the hundreds of thousands of members today. But now, as then, every member is important. It’s your engagement, your participation, and your passion that make general aviation heard in the halls of government and beyond.

Standing on the shoulders of AOPA’s founders and all the members who have made this association great, I consider myself lucky to be in the left seat at AOPA as we celebrate our seventy-fifth anniversary this month. At a milestone like this, it’s fitting to look back at our history and reflect on how AOPA has helped shape GA as we know it. One of the first things I did after being named AOPA president was to visit Wings Field in Philadelphia, where our association was created (see “Where It All Began,” page 30). I spent time learning about the history of AOPA and the people who brought us to this point. Later, I met with past AOPA presidents, who generously shared their experience. It’s important to see the present in the context of the past. But it’s even more important to use that knowledge to shape the future. Those who came before us set a solid foundation. It’s up to us to make the most of it and set the stage for the next 75 years.

As we look to the future, we know we will continue to face regulatory hurdles, attempts to impose new costs, and challenges from those who don’t understand the many contributions general aviation makes. And we know we can be successful only with the support and engagement of you, our members.

I’m no futurist, but it is my job to consider what lies ahead and where general aviation and AOPA will be 10, 20, 50 years down the road. After listening to thousands of our members, there are a few ideas that stand out in my mind. I want to see the pilot population start to grow and keep on growing. I want general aviation to be affordable and accessible to more people than ever. And I want GA to be both safe and fun.

Those themes are in keeping with the mission AOPA’s founders set out. So our goals aren’t new, but in some ways the path we must take to reach them has changed, along with the world we live in. That’s why so much of what AOPA is doing today—and has planned for the future—revolves around creating an environment that offers opportunity for us as pilots and aviation enthusiasts, and for those who will follow us.

One of our initiatives is building a flying club network designed to offer affordable access to aircraft, a sense of camaraderie, and the support of the flying community—three things we know get people flying and keep them flying. We introduced AOPA’s Guide to Starting a Flying Club—a comprehensive free guide to launching a new club. We launched the AOPA Rusty Pilots Program to help pilots who’ve been away for a while get back into flying. And we’re looking at ways to make GA airports more welcoming so nonpilots can discover flying and the role it plays in their communities.

We’re working hard in the states and in the nation’s capital to keep taxes and fees in check, and to make sure that regulations reflect the reality and the needs of general aviation flying. We work closely with GA supporters in Congress to make sure that legislation helps our community and doesn’t harm it. We keep an eye on a whole range of federal agencies to ensure GA is being treated fairly—and we take action when it’s not, as in recent warrantless stops and searches of GA aircraft and pilots.

The AOPA Foundation and Air Safety Institute are deeply engaged in making flying safer through research, education, training, and more. With the financial support of the foundation, ASI reaches tens of thousands of pilots with life-saving tools and information. 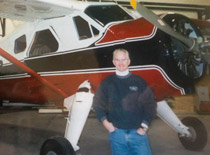 On the lighter side, we’re keeping the fun in aviation with our new AOPA Fly-Ins, including an October 4 homecoming at our Frederick, Maryland, headquarters to celebrate our first 75 years. I hope to see you in Frederick or at an AOPA Fly-In in your area. Together we can enjoy all that aviation has to offer, celebrate our association’s impressive history, and lay the groundwork for an even brighter future.

AOPA President Mark Baker started flying in 1977, became an AOPA member in 1987, and was named AOPA president in 2013.