What World War II training aircraft made its maiden flight on the same date—May 15, 1939—that AOPA was founded? 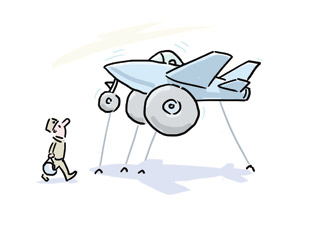 1. What World War II training aircraft made its maiden flight on the same date—May 15, 1939—that AOPA was founded?

2. Which of the following does not belong?
a. wind shift
b. pressure change
c. temperature change
d. precipitation change

3. True or False? The world’s first jet-powered flight occurred in 1939, the year in which AOPA was founded.

4. Why is it that altimeter errors are greatest when flying over mountainous terrain?

5. Which one of the following airplanes received its type certificate from the Civil Aeronautics Authority on May 20, 1939, only five days after AOPA was founded?
a. Boeing 314 Clipper
b. ERCO Ercoupe
c. Piper Cub Coupe
d. Stinson Voyager

6. True or False: The tires of high-speed airplanes are inflated with helium.

7. From reader James Robinson: What was the most popular (most produced) piston engine ever manufactured for aviation use?

2. d. The other conditions indicate a frontal passage. There is little or no precipitation associated with dry fronts.

4. Wind flowing over and around mountains results in a Venturi effect, much like air flowing over a wing. This causes wind speed to increase and (static) pressure to decrease. This can result in indicated altitude being significantly greater than true altitude, a dangerous error.

6. False. They are inflated with nitrogen, which does not support combustion that can result from excessively hot tires and brakes.

7. Pratt & Whitney built 173,618 Twin Wasp R-1830 engines. The two-row, 14-cylinder radial engine was used on the Consolidated B–24 Liberator, the Douglas DC–3, the Grumman F4F Wildcat, the Consolidated PBY Catalina, and many others.

8. c. This means that Guam is always the first place in America to celebrate AOPA’s birthday.