Get the app Get the app
AOPA will be closed July 4th, in observance of the Independence Day holiday. We will reopen at 8:30 am ET on Tuesday, July 5.
News & Media Liberty, Cessna Pilot Centers partner on flight training 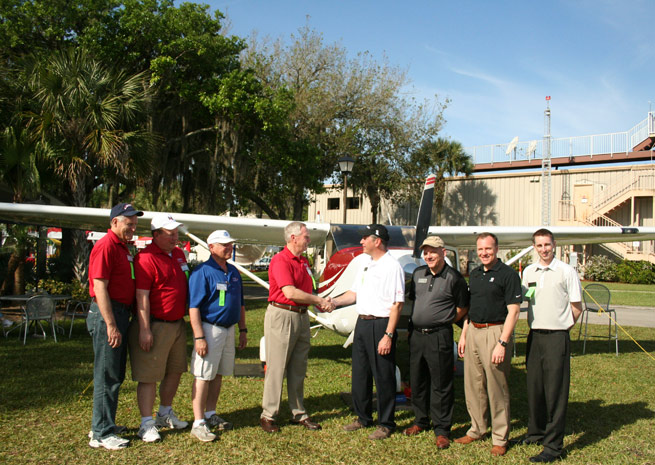 Lynchburg, Va.-based Liberty University signed a deal with Cessna Aircraft at Sun ‘n Fun to enhance the School of Aeronautics’ flight training program. Under the deal, students who enroll in flight training at qualifying Cessna Pilot Centers can also enroll in Liberty’s online courses and earn a bachelor’s degree in aeronautics.

In the past decade, more than 120,000 pilots have been professionally trained in a Cessna aircraft, demonstrating the brand’s commitment to training the next generation of pilots.

“We are excited about what this partnership means for pilot training and the valuable education students will receive in conjunction with their real-world experience,” said Joe Hepburn, senior vice president of piston aircraft, in a press release. “Liberty has an extensive catalog of online courses, which will enhance the experience gained through pilot training at Cessna Pilot Centers.”

Liberty’s online program has been in place for a few years, but the flight training affiliate program started in January in Newport News, Va., Brian Hough, director of business development/satellite operations for the School of Aeronautics, told AOPA. “We did it through the first school Liberty owned, Freedom Aviation, a fixed-base operator. Since we're a nonprofit, we needed a for-profit arm,” he said. “We set up the flight school to see how it would work before we went out and did it with other flight schools. We chose Newport News because it’s in an area with a lot of military people who have access to GI benefits.”

The biggest problem with people interested in flight training and education is the expense, said Hough. “Financing it is difficult because interest rates can be as high as 20 percent,” he said. “So we have people take our online curriculum and partner with flight schools across the country. Then when people apply, we have them go after grants and scholarships, then we go to low-interest Stafford loans, then finally government-backed loans like Plus.”

That financial aid is available makes things easier for flight training schools, said Hough. “A student comes, gets a degree and flight training. Flight schools gain revenue to conduct the training, and Liberty University gets the tuition, so it’s a win-win for all parties involved,” he said.

Most schools offering online degrees put “online” on a student’s diploma, said Hough. “But we don’t differentiate. When our students get their degrees, it doesn’t say online because they have taken the exact same courses, just online,” he said. “We actually invite students to come to commencement, and they’re in line with all the other students.”

Liberty has 120,000 online and 13,000 residential students, said Hough. “Our tuition rates for online are less than many states' tuition rates. According to the website, flight training for a private pilot certificate is around $11,000, while tuition for 15 credit hours per semester is $5,400.

“But the online degree is based on open enrollment, so we start new classes every eight weeks. People don’t have to wait until the next semester,” said Hough. “As soon as we receive your funds, you can start school. It takes three weeks from the time the student applies to the start of training.”

Liberty University bought an old Sears department store to house a call center that specializes in helping online students, said Hough. “We’re the largest Christian university in the world in terms of enrollment. We’re one of the top five online universities in the United States,” he said.