Get the app Get the app
AOPA Members DO more LEARN more SAVE more - Get MORE out of being a pilot - CLICK HERE
News & Media AOPA Fly-ins: Indianapolis

A special section for the AOPA Fly-in at Indianapolis, Indiana

The airport’s FBO, Indy Jet; Indianapolis-area EAA chapters; and the Indianapolis Aviation Authority are working with AOPA to make the May 31 fly-in an event to remember. 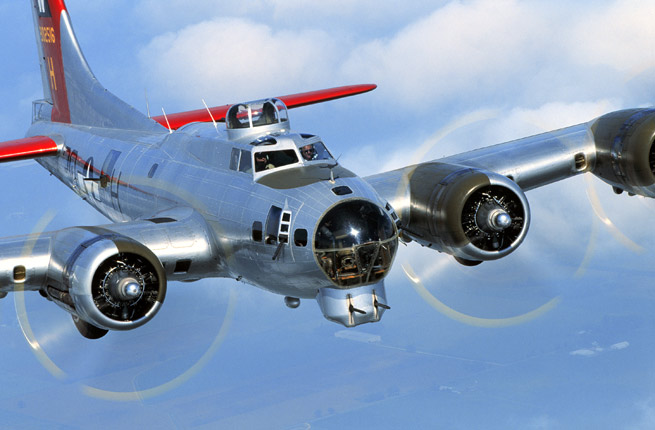 EAA’s B–17 Aluminum Overcast will be available for rides and tours at Indianapolis Regional Airport.

Soak up the Midwestern hospitality at Indianapolis Regional Airport (MQJ), where everyone’s eager to lend a hand to help and an ear to listen to your latest flying adventure. The airport’s FBO, Indy Jet; Indianapolis-area EAA chapters; and the Indianapolis Aviation Authority are working with AOPA to make the May 31 fly-in an event to remember.

Throughout the day on May 31 at the AOPA Fly-In in Indianapolis, a wide variety of events and activities will be available for AOPA members, pilots, and aviation enthusiasts. The event programming begins at 8:30 a.m. and concludes at 4 p.m.

Top 10 things to do in Indy

1. Indianapolis Motor Speedway. Feel the speed behind the wheel of an IndyCar series racer with an on-track driving experience; tour the race track and hall of fame; or golf at the famed Brickyard Crossing.

4. Pete Dye-designed golf courses. Pilots recommend teeing off at The Fort Golf Course or Maple Creek, both near Indianapolis Regional.

5. Children’s Museum of Indianapolis. Fun for all ages at the world’s largest children’s museum.

6. Indianapolis Zoo. Lions, tigers, and bears are fine, but don’t miss the dolphin exhibit or the chance to get in the water with them.

7. Eiteljorg Museum of American Indians and Western Art. Get inspired by the art, culture, and history of indigenous peoples of North America.

8. Indianapolis Museum of Art. Fall in love with pieces such as Robert Indiana’s “LOVE” sculpture.

9. Connor Prairie Interactive History Park. Step back in time 200 years to learn about life in Indiana from period actors. 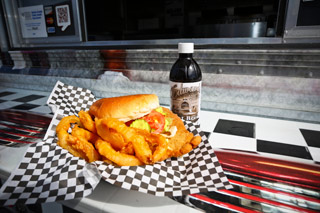 If you’re up for the Edwards Drive-In challenge, your taste buds will thank you. The Indianapolis-based, family-owned and operated diner’s signature handmade breaded pork tenderloin sandwich, hand-dipped onion rings, and homemade smooth root beer made famous in 2010 on the Travel Channel’s Man vs. Food will be served at the Indianapolis AOPA Fly-In. The free lunch features the eight-by-seven-inch pork tenderloin sandwich. The restaurant’s Dashboard Diner food truck will be on hand to sell onion rings, and the homemade root beer will be available as a tasty treat for $2 a glass. Co-owner Jeff Edwards said the diner is no stranger to serving large crowds. The family worked overtime for three weeks after the diner was featured on Man vs. Food, served 5,000 football fans before the Super Bowl, and boasts a four-minute turnaround time from the food truck during the lunch hour in the city. Bottom line: Bring an appetite. “If you come to Indiana and you don’t try a pork tenderloin,” Edwards said, “you’re missing out.” 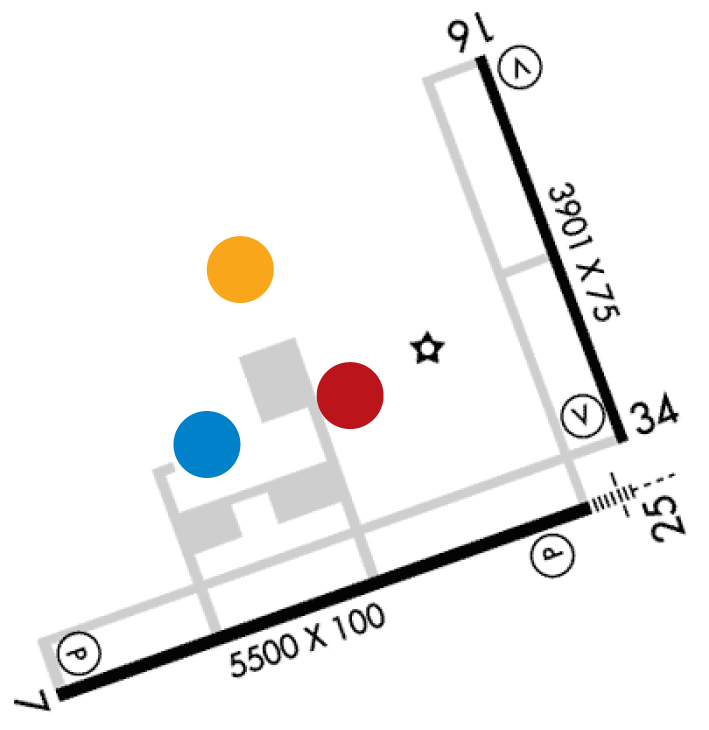 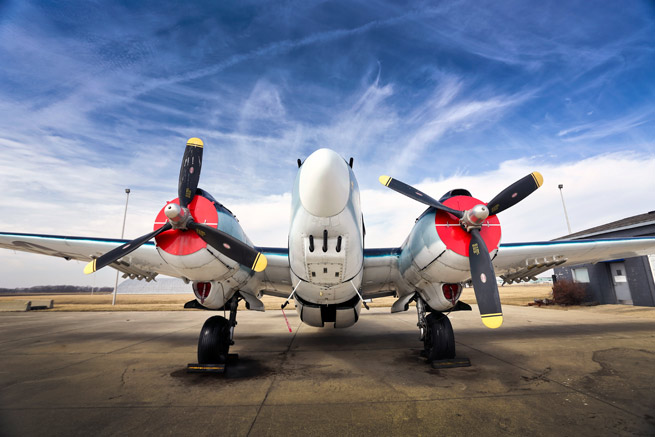 Aviation event of the season

Hot Stuff, a Lockheed PV–2 Harpoon (shown above) based at Indianapolis Regional Airport, may leave pilots scratching their heads. Many think the World War II-era aircraft looks like a tailwheel version of the North American B–25 Mitchell. “We like to tell the B–25 people we haul more, fly faster,” said Gaylon Piercy, a member of the American Military Heritage Foundation, which owns the aircraft. Stop by the warbird for a chat, and inspect it inside and out to learn of telltale differences between it and the B–25. The World Wars Aircraft Museum based at the airport also will have an eclectic collection on display, including a rare twin Navion that’s being restored, an experimental seven-eighths scale P–51, and two Nanchang CJ–6As.

Experience history in the Experimental Aircraft Association’s B–17 Aluminum Overcast (shown on the previous page) or tumble through the air in a Pitts S2C in advance of or during the fly-in.

Airshow pilot Billy Werth of Grayout Aerosports, based at Indianapolis Regional, will be offering rides in a Pitts and perform one short demonstration for the crowd. Werth said his thrill rides are custom tailored and range from a single aerobatic maneuver to a full airshow performance at altitude. His goal is the same whether passengers are 5 or 79—that they leave with a “smile on their face and an empty airsick bag.” The 15- to 20-minute flights will cost $225 (limited availability). Indy Jet will also be offering aviation discovery flights.

AOPA President Mark Baker will host a Pilot Town Hall to discuss pressing advocacy issues on Capitol Hill and give an update on the association’s efforts to help keep flying safe, fun, and affordable. Indiana State Sen. Brandt Hershman, a pilot and AOPA member, will be speaking about current and past legislative efforts that have helped boost GA in the state, including legislation he spearheaded last year to remove state sales tax on 100LL and jet fuel.

Fly in early and the smell of pancakes will greet you upon arrival. EAA chapters in the Indianapolis area have united to host a pancake breakfast ($5 per person) and are discussing the meal preparations—from job duties to batter consistency—with the precision of an instrument approach brief. Edwards Drive-In will host lunch (free to AOPA members and their immediate family, $10 for everyone else), featuring the restaurant’s signature pork tenderloin sandwich (see “Pilots vs. Pork Tenderloin”).

AOPA President Mark Baker will present a Pilot Town Hall meeting at 2:45 p.m.—this event was previously scheduled in the morning. So many attendees have RSVP’d that in order to accommodate all, some scheduled events have been changed (please see page R-1 of this insert for all dates and times). 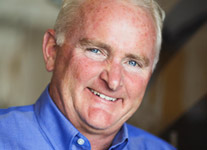 Mark took office as AOPA’s fifth president in 2013. An accomplished general aviation pilot, he began flying at the age of 16. He has owned numerous aircraft over the years, including a Beech 18 on floats. A native of Minnesota, he is an avid seaplane pilot. He has more than 7,500 hours and holds multiple ratings. 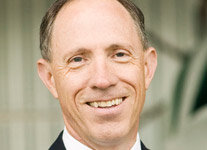 Bruce leads the AOPA Foundation, which funds the work of the Air Safety Institute. The organization is nationally recognized, with numerous awards on aviation safety leadership and educational program excellence. He writes the monthly “Safety Pilot” column in AOPA Pilot magazine, has a weekly blog, and is a frequent seminar and webinar presenter. 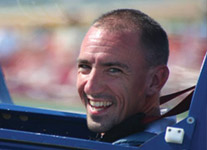 From instructing on the large KC-135R refueler to the high-G environment of hardcore airshow performing in a muscle biplane, Billy covers the aviation spectrum. He is co-owner of Grayout Aerosports, which offers aerobatics, spins, and unusual attitude training. 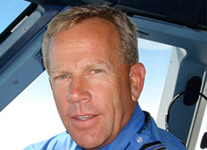 Adrian is an airline transport pilot, currently flying for JetBlue Airways. Prior to JetBlue, he flew for the FAA, NASA, General Dynamics, and the Washington Redskins. Adrian achieved Master Certified Flight Instructor and Master Ground Instructor with National Association of Flight Instructors and Master Instructors LLC. He is also an A&P mechanic with inspection authorization. 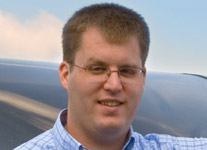 John oversees the Sporty’s Pilot Shop catalog and online marketing programs. He has been flying for 15 years and is a commercial pilot with more than 2,000 hours. He holds helicopter, glider, and seaplane ratings. John flies a Robinson R44, a Citabria, and a Pilatus PC-12.