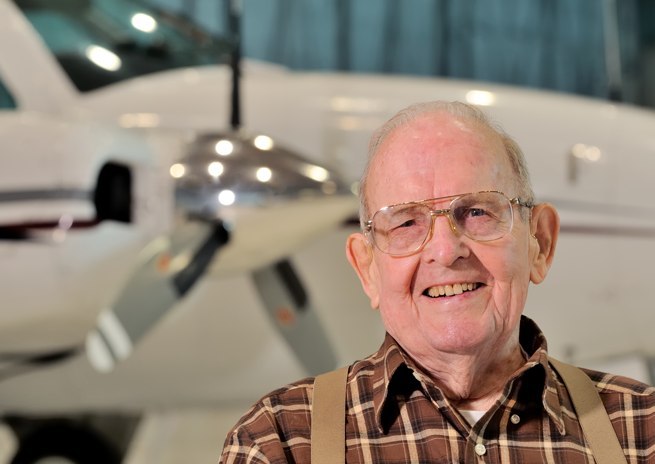 Seventy-five years ago Ed Adams, 92, of Winston-Salem, N.C., was the “baby student” of Stewart Airport in Parkersburg, W.Va. He joined AOPA primarily to be involved with other pilots

“I joined AOPA in 1939,” Adams recalled. “I was 17 years old—and had just soloed. I’ve had a passion for flying ever since I was very, very young, and I was fortunate enough to have parents who assisted me in this,” he continued. “When I graduated from high school my father gave me flying lessons at the local airport. I soloed in seven days. I wanted to go on and be an airline pilot, which has been my lifelong ambition. But unfortunately my eyesight would not allow that.”

He garnered the baby student moniker because of his age. “I was the youngest one to be on the field to take lessons, and the newspaper gave [me] the heading of ‘baby student,’” said Adams, who still has a scrapbook filled with yellowed newspaper clippings from the local paper, which gave flight training and local aviation events considerable coverage.

During his first eight hours of instruction, Mrs. Clarence McElroy, his instructor, said he “used very good judgment and never was overconfident.” According to the newspaper, Adams was the youngest of 40 students at the airport, and soloed in the least amount of time of any student at the field to that date.

Most of his student flying was in Piper Cubs. “I had a young lady that taught me to fly. She was a 99er and ended up flying with the WASPs, ferrying planes during the war, and she was quite tough on me when I was learning,” he explained. “She put me through stalls and the whole works, and one thing she taught me that I’ve never forgotten was when making a forced landing, never to change your mind. Once that came in very handy to me when we had a forced landing in a cornfield.” Adams was flying with another pilot on that occasion, and kept him from making a last-minute landing-site change that might not have been successful. 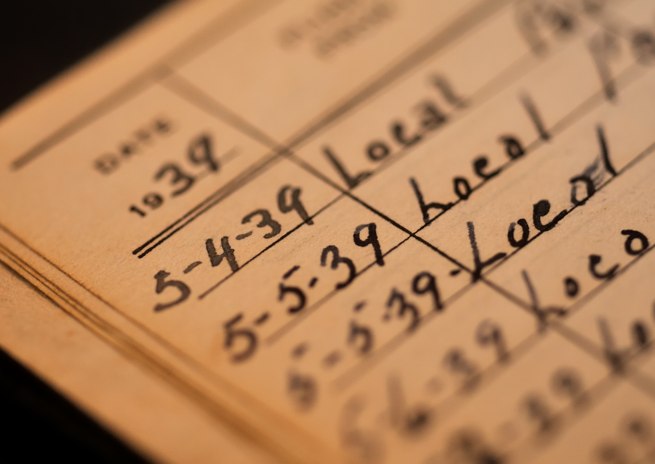 “Then I went on to the Waco F. That was a great lesson in flying because of the aerobatics training I received there. The Waco F was the most fun to fly—I really enjoyed that. It helps improve your flying, and improve precision flying.”

Adams had earned his solo license and was ready for his private pilot checkride when the minimum age for holding the certificate was extended from 17 to 18. “I had to wait a while before I got my private. It was very frustrating. But after I got my private, I went on and got my commercial right away, and then my instrument and multiengine.”

The young aviator hoped to attend the Boeing School of Aeronautics and become an airline pilot. “The war interrupted that. I left the Boeing school to join the Air Force. I wanted to be an air cadet, and my eyesight eventually negated that. I eventually joined the Army and after the war, I came back and started flying privately again. I had a Cessna 172, and then a Bonanza, and then I went to the Baron.

“I was in the ceramic tile business and I used the Baron to make trips all over the United States, to call on customers and so forth.” Around 1980, Adams flew from his home field of Owensboro-Daviess County (Kentucky) Airport to St. John’s, Newfoundland, Canada—in one day. “We had a mine located in Newfoundland, and it was quite an experience to make that trip. I remember flying across 180 miles of water to get to Newfoundland and I guess I was lonely, all by myself out there, and I called Canadian air traffic control and the first thing they said to me was, ‘Are you lonely?’ They said, ‘We have you on radar, you’re right on course, and you’ll be in Newfoundland in another 20 minutes.’”

He also used the Baron for personal travel. “I had a daughter in school in Winston-Salem [North Carolina]; I would go down and see here. My wife and I flew a number of trips to different tile contractor conventions. It was a very useful tool.”

When the association was being formed, a representative came to the now-long-closed Stewart Airport in Parkersburg, wanting to form a group. “Of course, we all were quite interested in learning what they could do for us and what we could do for them,” he recalled. Pilots met for dinner once a month. “It was very informative because it was helpful to learn of all the experiences other people had had, and try to avoid them yourself. It enabled me to have associations with other pilots, and learn from them and heed their advice.” 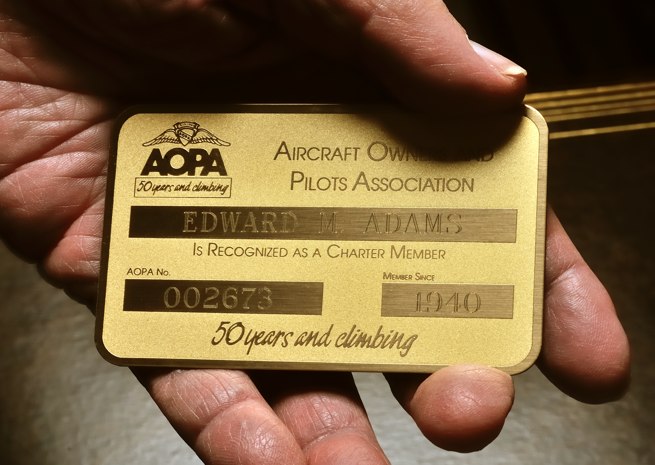 Back then, there was no AOPA Pilot, although there was an insert in Popular Aviation, which later became Flying. “I’ve always read it, and I still do today, every page of the magazine. I consider it as continuing education. And even though I’m not flying today, I still read it,” he said. “I think every pilot should join the AOPA because there’s so much to be learned, and so much help that can come to each pilot. It gives you a voice in Washington which you wouldn’t have individually, and I learned a lot about accidents—you try to learn from the accidents so you wouldn’t make the same mistakes. The legal advice, and interpretation of different regulations—all this to me has been a continuing education.

“In those days we used to have a lot of fly-in breakfasts. We would get together and make a flight, usually it was anywhere from 50 to 150 miles.” And no members on these flights were as young as Adams. “I was always the youngest—I was the baby.”

His later contributions to aviation extended beyond the cockpit. In 1968, Adams was appointed to the Owensboro-Daviess County Airport Board, serving for eight years—until he moved from the area—and became the board’s chairman. “I worked very closely with the FAA. During my tenure there, we lengthened the runway twice, and we got a control tower put in. We established a fire department on the field, and we put all new lighting in on the runways. I was very proud of what our board did and accomplished to help aviation in Owensboro.

“When I was the chairman of the airport board we found it necessary to hire legal help in Washington, and I had no knowledge of anybody in Washington. I called AOPA and they gave me names of attorneys that we should contact, and that helped us immensely.”

Later, he received a gubernatorial appointment to the Kentucky Air Zoning Commission. “We had the responsibility of assuring that towers, primarily radio towers, that were going to be located in the state would not interfere with aviation.”

Adams witnessed many changes in aviation. “From 1939 there were many more pilots, I think, than there are today. And the technology has passed me by,” Adams laughed. “I’m not sure I could fly with a glass panel now. But it’s so much better—I put a radar in my Baron, and that was a great help.”

Adams stopped flying in 1986. “I didn’t think it was fair for me to be flying my family at my age. I was concerned that I might have a heart attack or something, and my wife or my family wouldn’t know what to do. I’ve always felt I was not a bold pilot but an old pilot, and I had reached a time when it was apropos for me to curtail my flying activities. It took an awful lot of thought; I didn’t want to do it, and I still wish I could go out and fly tomorrow. I just have a passion for flying; to me, it’s relaxing, and it’s satisfying.”

Technical Editor
Mike Collins, AOPA technical editor and director of business development, died at age 59 on February 25, 2021. He was an integral part of the AOPA Media team for nearly 30 years, and held many key editorial roles at AOPA Pilot, Flight Training, and AOPA Online. He was a gifted writer, editor, photographer, audio storyteller, and videographer, and was an instrument-rated pilot and drone pilot.
Go to Mike Collins's Profile
Topics: AOPA Events, Events, Canada