Get the app Get the app
AOPA will be closing at 1:45pm ET on Tuesday, December 6th. We will reopen Wednesday morning at 8:30am ET.
AOPA Members DO more LEARN more SAVE more - Get MORE out of being a pilot - CLICK HERE
News & Media Reviving Aurora: Friends of wing walker to restore Stearman 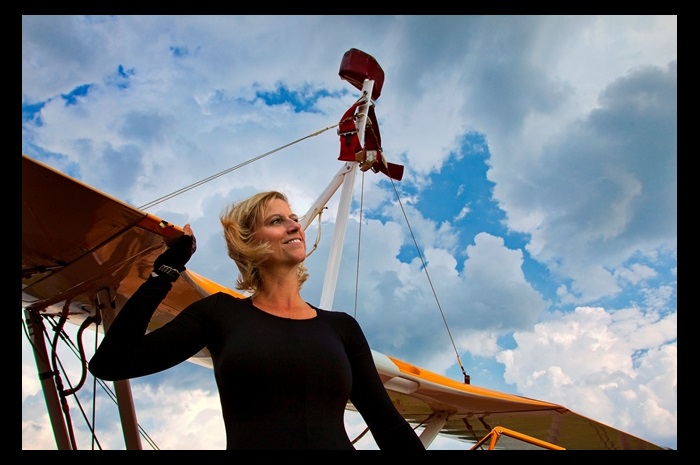 Friends and family of Jane Wicker, a wing walker who died in an airshow accident in 2013, want to rebuild her biplane as a way to honor her memory.

Wicker loved her custom yellow-and-red Stearman. She had searched for months to locate the perfect airplane that would bring her back to the airshow circuit after a years-long hiatus, and she had been excited to locate a Stearman with hand-built and stitched wings in Minnesota.

She named the airplane Aurora, in part because of the word’s connotation with new beginnings. “That’s so appropriate of my airshow career,” she told AOPA Pilot in a feature article in the November 2011 issue.

Wicker was back in the air wing walking that year, but her return ended tragically in June 2013. She and her pilot, Charlie Schwenker, died in a crash during their performance at the Vectron Dayton Airshow in Dayton, Ohio.

Aurora—or what is left of it—is in Winchester, Va. “It’s pretty well demolished,” said Rock Skowbo, who had been Wicker’s fiancé. Skowbo owns a Stearman project, and he intends to use parts from that airplane to re-create Aurora.

“It will essentially be an all-new airplane, but it will maintain Jane’s serial number, the N number, and all the specifications that she had the airplane custom built to,” including its distinctive red-and-yellow paint scheme, he said. For example, Wicker’s Aurora had a unique set of wings, which will have to be constructed from scratch, he said. He hopes to involve the builders of the first Aurora to further enhance the project.

“That airplane started out as a serial number and became Aurora, and that’s what’s happening again,” Skowbo said.

Wicker was a consummate professional who loved to interact with the people who came to see her. “She would stand out in front of the crowd—everyone else would be dropping like flies, but she’d stand out there in the heat signing autographs,” Skowbo said. On the day before the accident, she had practiced her routine for a group of children with special needs. Afterward, she signed autographs and took photographs with the children and their families for hours, he said.

When the new Aurora is airworthy, Skowbo plans to bring it to airshows and other aviation events. “Jane really made this airplane and herself available to everybody, and we wanted to do the same thing—make it available,” Skowbo said. The restoration is meant to become a flying legacy to the memories of Wicker and Schwenker.

The complete restoration “will take awhile, and will need to have a lot of people involved,” Skowbo said. A group of volunteers called Save Aurora has created a website that will document the restoration. “We’re still processing a lot of what’s salvageable from the wreckage and what can be used on the new airplane, and making up a parts list,” he said. “A lot of components need to be restored and repainted.”

Monetary, parts, and labor donations are accepted through the website, which notes that assistance in the form of Stearman parts and/or aircraft mechanical expertise is welcome. “Any parts donated that can’t be used can be sold/traded for parts we need,” according to the website. Major items needed include a Pratt & Whitney R-985 engine, a Hamilton Standard 2D-30 propeller, a fuel injection system, the wings, a center section, a fuel tank, a Garmin GPS nav/com, a Mode C transponder, instruments, seats, and controls.

The restoration may resemble a puzzle with many pieces missing, but “It’s basically going to happen,” Skowbo said. He said the group hopes to get Aurora together by summer 2015 so that it can be brought to some local airshows in the fall.