In the summer of 2012, pilots Meredith Tcherniavsky Holladay and Dana Holladay embarked on a trip to fly a Piper J–3 Cub to all lower 48 states. Since then, they have had a daughter, moved to Florida, and started the Holladay Aviation flight training school at Jacksonville Executive At Craig Airport, according to Meredith Holladay.

Marketing the school in Florida has been a learning experience. “I learned to fly at Montgomery Airpark and built up a huge family network within the general aviation community. When I started teaching in 2005, I didn’t have to spend a dime because I had a good reputation,” said Holladay. “Business always came.”

“It took a lot of hard work, cold calling, aggressive advertising and old-fashioned pavement pounding to let people know not only that we were here and open for business, but that we're truly unique compared to most flight schools. Dana and I have more than 10,000 flight hours between us, and most of that is dual instruction given,” said Holladay in an email. “We are passionate about teaching and committed to providing excellent customer service. We were confident that in time, pilots in Jacksonville would get to know us and spread the word about Holladay Aviation.”

Six months after arriving into town, the business is thriving and growing, said Holladay. She praised the support of Experimental Aircraft Association Chapter 193, located at the airport, where she now serves as chapter newsletter editor. “And Beach Banners has also been a great help. GA is alive and well here at Craig and we’re so happy with the response.”

The school recently completed its first 100-hour inspection on the Cessna 152 it owns, said Holladay. “We are in the process of acquiring a Rans S-6 Coyote S-LSA that will serve as our Rans dealer demonstration aircraft as well as our primary light sport trainer,” she said. “With the [Piper] Warrior lease coming to an end this month, we've secured an agreement with Beach Banners to use their Cessna 172 for training.”

Holladay Aviation has about a dozen private pilot students on the roster, with another dozen customers working toward a flight review or instrument rating, said Holladay. “We've had two customers come to us from other schools to finish up their private training, and both passed their checkrides,” she said. “We've also been providing proficiency training to several aircraft owners, including some who fly light sport aircraft and tailwheel aircraft.”

With the addition of the Rans Coyote this summer, the school hopes to establish itself as the premier light sport training center in north Florida, said Holladay. “Although light sport aircraft are popular in Florida, it hasn’t found a niche in the Jacksonville area. We've already had a ton of interest.”

Holladay called their operation “a mom and pop” flight school. “We’re not planning on hiring instructors to work for us so we can retain our quality of instruction and the quality of life we want,” she said. “We feel like we’re developing a niche market here like we had in Maryland.”

The Holladays will be at the AOPA Fly-In in Brunswick, Ga., in November. “AOPA has been a huge supporter of not only our trip, but getting the word out about our school,” said Holladay. “We do everything we can to drive people to your website and get them to become members.” 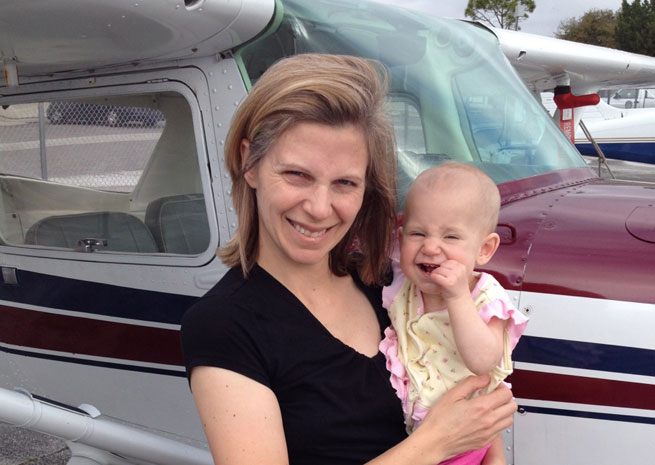