Get the app Get the app
AOPA will be closing at 3:15pm ET Thursday, December 1st. We will reopen Friday morning at 8:30am ET.
AOPA Members DO more LEARN more SAVE more - Get MORE out of being a pilot - CLICK HERE
News & Media New kit uses iPad to track unmanned aircraft 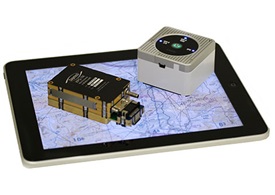 The tracker allows air traffic control, aircraft in the area, and third-party personnel to track drones and coincides with the FAA’s announcement of six test sites to help ensure the safe integration of UAS with NextGen technologies into the National Airspace System.

Sagetech President Kelvin Scribner told AOPA his company has been in the UAS business for quite some time. “We helped develop aviation transponders for drones and release our Clarity ADS-B receiver based on drone technology,” he said. “This new kit is just a collection of devices put into one box, making it simple and useful.”

“The Tracker Kit is very intuitive and easy to use,” said Eric Folkestad, of Arcturus UAV and President of the Association for Unmanned Vehicle Systems International (AUVSI) Cascade Chapter, in a press release. “It lets us use NextGen ADS-B to track our aircraft on the iPad, and we see other airplanes transiting the area as well, which are exactly the ones we need to avoid. This product is key to safety.”

Providing for safe operation of UAS in the National Airspace System is a critical FAA milestone mandated by Congress. UAS typically fly missions that are considered too "dirty, dull, or dangerous" for manned aircraft.

The equipment is undergoing certification and Sagetech is working with FAA on this, said Scribner.  “We are accepting orders now and will have inventory on shelves in a few weeks,” he said. The kit, which costs $8,600.