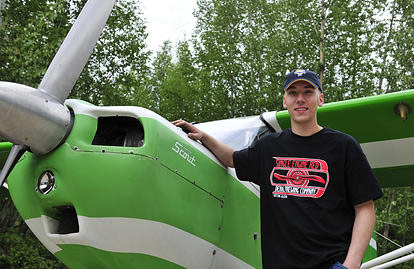 After six days; flying 5,600 miles at 85 knots in a Citabria from Fairbanks, Alaska, to Oshkosh, Wisconsin; camping out at airports along the way; and eating Mountain House dried food, 21-year-old Alex Mumley-Dupuis said he was ready for a good meal upon arrival at EAA AirVenture.

Mumley-Dupuis, who serves as an airport manager in airport operations for the Air Force at Eielson Air Force Base in Alaska, took 21 days of leave for Oshkosh and the trip that, so far, has brought in more than $7,000 for Wounded Warrior Project. All of the money raised goes to Wounded Warrior Project, he said. Mumley-Dupuis used money he saved during a six-month deployment to Manas Air Base in Kyrgyzstan to pay for fuel and his own expenses. He raised money for Wounded Warrior Project because he wanted to make the trip into “something beneficial,” and “what better way to give back to brothers and sisters in arms,” he said, noting the Air Force value, “Service before self.”

Mumley-Dupuis flew along the Alaska Highway and the reverse of the Alaska-Siberia (ALSIB) Air Route. The route—from Great Falls, Montana; through Canada to Alaska; and on to Moscow—was used in the 1940s to fly aircraft to the Soviet Union through the Lend-Lease Act of 1941 in an effort to defeat Nazi Germany. Nearly 8,000 aircraft were delivered to the Soviet Union, according to the National Park Service.

During the flight, Mumley-Dupuis landed at airports that were crucial to the ALSIB Air Route, talked to pilots, and visited museums on the fields that proudly displayed their roles in the effort. But, “at 85 knots, you really have a lot of ground to cover,” he said. He flew 10 to 11 hours a day and described some stops as “gas, go, gas, go.” Originally, Lee Griffin, who owns the Citabria Mumley-Dupuis is flying, was going to accompany him on the route in a T-28, but a mechanical malfunction prevented the aircraft from coming, leaving the instrument-rated private pilot solo for the route.

In addition to his dried meals, tent, and clothes, Mumley-Dupuis packed a banner that supporters of the trip have signed along the way. He has it on display with the Citabria in the camping area at EAA AirVenture. 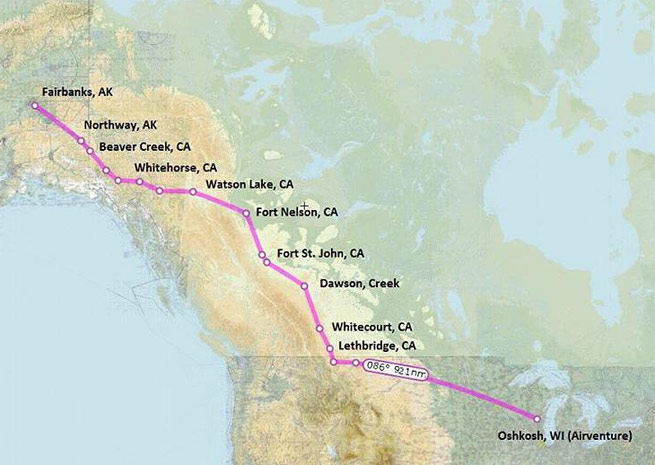