Get the app Get the app
Already a member? Please login below for an enhanced experience. Not a member? Join today
News & Media Pilot to use L-139 to draw girls to aviation

Pilot to use L-139 to draw girls to aviation

When Dianna Stanger hops out of her new L-139 prototype fighter on the flight line at airshows and fly-ins among the other warbirds, she hopes girls and young women will become inspired to enter aviation as a hobby or career.

“It would be great” if girls walking the flight line saw “man after man in front of the warbirds and then, ‘Wow, a girl did it,’” Stanger said. 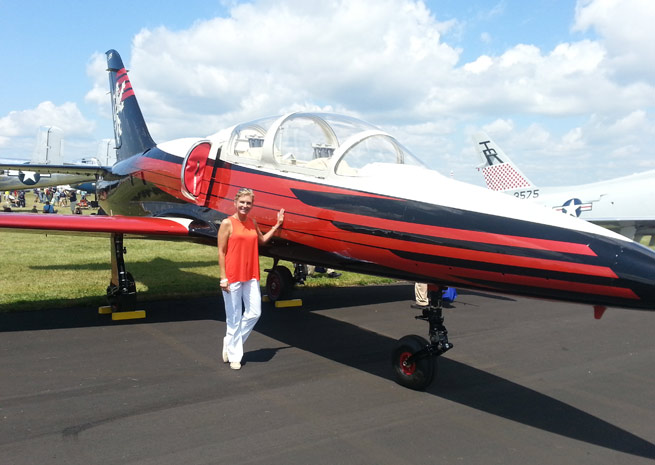 The two-time women’s Air Race Classic team champion, Women of Aviation Worldwide Week participant, Whirly-Girls president, and Angel Flight South Central board member bought the L-139 in the fall of 2013 and flew it to EAA AirVenture in Oshkosh, Wisconsin, for display just days after its new paint scheme was finished. Her “dream airplane” has only 500 hours on it, and she plans to use the jet warbird to bring awareness to the aviation organizations with which she’s connected. She said she may even transport patients through Angel Flight South Central or give Women of Aviation Worldwide Week flights in the L-139. In March, she took more than 250 girls for flights in her helicopter at Calhoun County Airport in Port Lavaca, Texas, during Women of Aviation Worldwide Week.

“If I have just one who says she wants to become a pilot because of me, that makes it worthwhile,” Stanger said.

Stanger’s Air Race Classic team, The Racing Aces, won the race across the country in 2012 and 2014 in Cirrus SR22s. Both years, the team turned its $5,000 winnings into a scholarship for a woman to pursue a career in an aviation-related field, whether pilot, air traffic controller, or mechanic. This year’s scholarship will open for applications in the fall and be available for use the first semester of 2015.

Stanger said she’ll continue reaching out to girls to interest them in aviation in an attempt to increase the number of female pilots above six percent. “Maybe having another female talk to them will make a difference,” she said.