With sweaty palms and racing hearts, they walked onto the stage to strap on the simulator. It may not have been the pressure of a real airplane, but with an audience, performing an "airshow performance" consisting of a short-field takeoff, steep turn, and spot landing in a simulator feels far beyond any stress of a normal flight.

Redbird’s Flying Challenge Cup wrapped up at EAA AirVenture in Oshkosh, Wisconsin, and for the 12 finalists who were part of the action, it was the experience of a lifetime. The challenge is the culmination of a project aimed at getting pilots, student pilots, and nonpilots into Redbird simulators all over the country—and in many cases, worldwide—to compete against themselves and each other in the three fundamental maneuvers. Redbird tallied the scores and sponsored the 12 finalists (four each in three categories) with a trip to Oshkosh and the chance to compete in front of friends, family, and judgmental pilots on the main stage at Oshkosh’s Boeing Plaza.

In the end, the competition was fierce. The student pilot group was separated by only 200 points or 2 percent, and Matt Smith, winner of the nonpilot category, pulled out his win by that margin as well.

“My heart was really beating,” he said. Smith is a recent graduate of the West Michigan Aviation Academy, an aviation-focused public charter school. Blake Dahlquist, a classmate one grade behind, was a finalist in the student pilot category and came in second by only 48 points. “I’m not upset I didn’t win,” he said. “I won by even coming here.”

All the finalists were given a a Garmin D2 watch and the trip to the show. But only Smith, Patrick Webb from Aero-Sphere in Erie, Colorado, and Kevin Sandoval from CRAFT in Hanahan, South Carolina, took home a Lightspeed PFX headset and the big trophies.

More than 8,000 pilots registered for the challenge, and thousands of hours went in to practicing for the competition. For Redbird, the challenge proved to be a great way to increase awareness and utilization for its customers, and a great platform to test new student-led technology in its platforms. 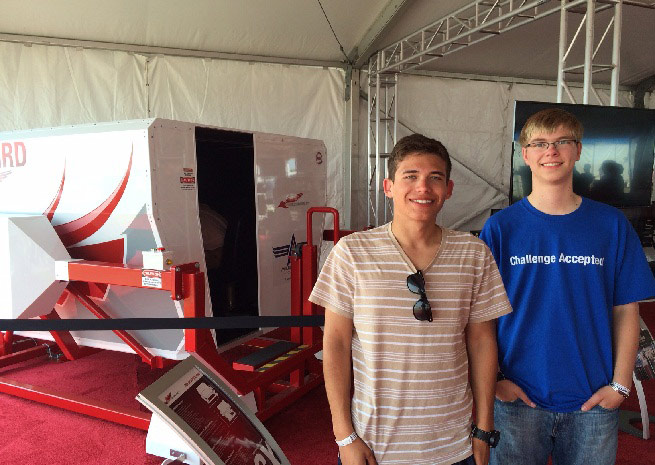