Get the app Get the app
News & Media Fly-Ins: Indianapolis

‘It doesn’t get any better than this’

Three dozen pilots camped under their wings at Indianapolis Regional Airport the evening before the second AOPA Regional Fly-In of the year. Another 500 aircraft and more than 2,000 attendees joined May 31, including students pilots; families with generations of pilots; and area pilots, EAA chapters, and Civil Air Patrol members who volunteered to cook, direct traffic, and park airplanes.< 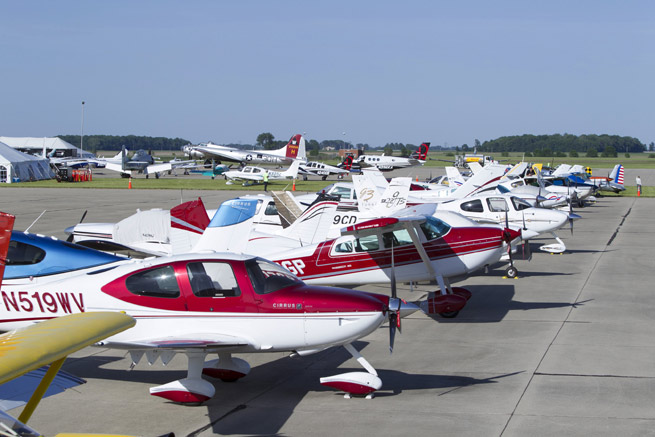 Three dozen pilots camped under their wings at Indianapolis Regional Airport the evening before the second AOPA Regional Fly-In of the year. Another 500 aircraft and more than 2,000 attendees joined May 31, including students pilots; families with generations of pilots; and area pilots, EAA chapters, and Civil Air Patrol members who volunteered to cook, direct traffic, and park airplanes.

“I like to be with my airplane, kick back, and enjoy the flying experience,” AOPA member and fly-in volunteer Michael Pastore said of camping with his Cessna 140. “It doesn’t get any better than this.”

The busy arrival on Saturday was “like a mini-Oshkosh,” tweeted Sporty’s Vice President John Zimmerman, who led a seminar about flying with the iPad. The arrival wasn’t the only part of the fly-in reminiscent of Oshkosh—so were the attractions. Attendees took in a static display, exhibit hall, warbird rides, and educational seminars. The Trojan Horsemen performed a three-ship T–28 Trojan formation flyover, while airshow pilot Billy Werth wowed the crowd during an aerobatic performance in a Birchler Boyd Eagle 540.

Video Extra: See the action in Indy in this online video.

Gateway to the Backcountry 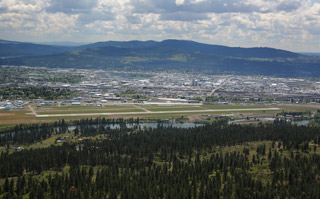 Aviation in the West started at places such as Spokane’s Felts Field (SFF). The historic airfield was once known as Parkwater because it is situated along the south bank of the Spokane River. In 1927, Charles Lindbergh visited the field and inspired the organization of the National Air Races, which were held in Spokane that summer. Jimmy Doolittle started the event with an aerobatic display.

The Northwest’s largest theme park is located just 47 miles from Spokane. Silverwood Theme Park is on the site of the former Henley Aerodrome. Spokane businessman Gary Norton bought the airstrip in 1981 and kept his antique and vintage aircraft collection there. When he opened a theme park in 1988, he hosted daily airshows. One of the performers was aerobatic pilot Bob Heale, who was a flight instructor based at Felts Field. He was killed when his CAP-10B crashed at an airshow at nearly Fairchild Air Force Base. His aircraft is part of a memorial to him near the Felts Field terminal building. Silverwood stopped its airshows soon after. The park has 70 rides, slides, and attractions, including four roller coasters.

If you’re visiting here for AOPA’s fourth 2014 fly-in, you’ll delight in the beauty of the area.Crystal-clear rivers and rugged landscape define the great Northwest. Spokane is just 25 miles from Lake Coeur d’Alene in Idaho. The Spokane River is a 111-mile tributary of the Columbia River, which originates from 25-mile-long Lake Coeur d’Alene.

The Spokane River, which runs behind Felts Field, is overlooked by the Minnehaha Rocks and nearby Centennial Trail. Mt. Spokane—at 5,883 feet—also overlooks the field. Spokane is named for the Native Americans here, known as Children of the Sun. They fished and lived along the Spokane River and caught salmon in the Spokane River Falls; in Riverfront Park, the falls are spectacular.

‘We fly the old stuff’ 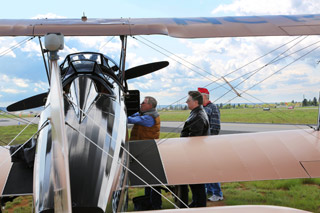 We stumbled upon Addison Pemberton at Spokane’s Felts Field on a sunny May afternoon. Scouting for stories about the historic field for AOPA’s preview of the Washington airport before the association’s fourth 2014 fly-in, there was Pemberton climbing into a 1931 Laird Commercial for a test flight with his friend Larry Howard. Howard had just finished the restoration and Pemberton was happy to test-fly it with him. This is a little unusual—usually it’s Pemberton who has done the restoration.

Pemberton & Sons Aviation has been restoring very, very old aircraft at Felts Field for more than 20 years. Sons Jay and Ryan, along with wife and mother Wendy, support Pemberton—an engineer—in his labors of love. Jay and Ryan’s wives also participate. Hangars 65 and 66 at Felts Field contain an amazing collection of memorabilia, works in progress, fabric, gear, signage, wheels, tires, engines—you name it—to help in the family projects. There’s even a couple of double beds for when the work lasts into the night.

Pemberton is probably most famous for the restoration of a 1928 Boeing 40, an airmail carrier that crashed in Oregon in 1928. The aircraft had been left derelict in the Oregon mountains for more than 80 years when Pemberton bought its parts and frame from the Oregon Aviation Historical Society for $5,000 and a propeller. Wife Wendy said he didn’t buy a project, he “brought home DNA.”

The seven-year, 60-volunteer restoration resulted in the oldest flying Boeing airplane and the only flying Boeing 40. Pemberton has restored more than 16 aircraft, including a Beechcraft D–17, 1942 Grumman Goose, Travelair 4000, Waco EQC–6, and 1929 Stearman 4DM Sr. Speedmail. The company’s motto is “We fly the old stuff.”