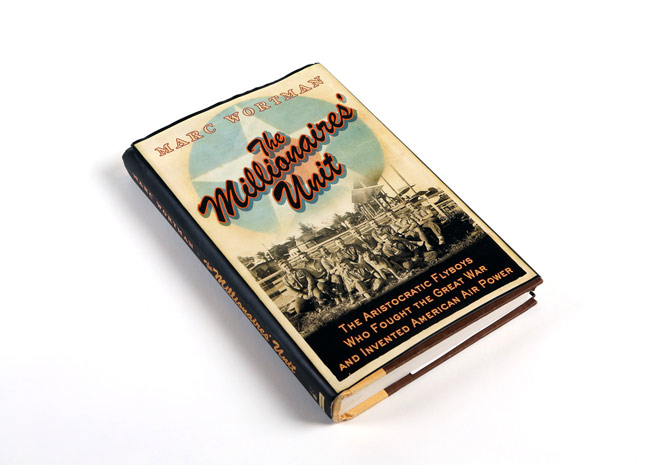 A happenstance sighting in a book store led to the making of a documentary film based on the book The Millionaires' Unit. Marc Wortman wrote the well-researched book in 2006. It traces the lives of a group of Yale students and their wealthy, influential families in the days leading up to the United States’ entry into World War I and then the group’s struggles during the war. Recognizing America’s shortcomings in developing military air power, the young men pleaded with the U.S. government to begin development of a stronger aviation program as France and Germany in particular excelled at aviation in the days leading up to the war. When it didn’t happen, the men and their families financed their own flight training and aircraft purchases. Eventually, the U.S. recognized the need and the men’s effort became the core of the Army Air Corps and ultimately the U.S. Air Force.

The book tells the intertwined tale of a small group of the cadets and their families throughout WWI and follows their influence into World War II and beyond. The successes, challenges, and heart break that unfolds couldn’t be imagined by any fiction writer.

The book had been in print for several years when California filmmaker Ron King walked into a bookstore and saw a book with a picture of his grandfather John Vorys on the cover—a photo he had never seen before. He read the tale of the group’s exploits and contacted Wortman and fellow filmmaker Darroch Greer with the idea of a documentary on the unit. Six years later the film, narrated by actor Bruce Dern, is nearing completion. The film had its first public screening at EAA AirVenture in July. A trailer is posted online.

The effort drew together a number of family members of the WWI aviation pioneers, including cousins Harry and Mike Davision, grandsons of F. Trubee Davison, one of the main characters in the book. Mike Davison, managing partner of AirNav, is also the grandson of David Ingalls, another main character.

The group is working to have the film released to aviation museums starting in 2015. The first screening occurred the same week as the 100th anniversary of the start of WWI in Europe. The United States entered the war three years later with The Millionaires' Unit leading the aviation charge.

Contributor (former Editor in Chief)
Contributor and former AOPA Editor in Chief Tom Haines joined AOPA in 1988. He owns and flies a Beechcraft A36 Bonanza. Since soloing at 16 and earning a private pilot certificate at 17, he has flown more than 100 models of general aviation airplanes.
Go to Thomas B Haines's Profile
Topics: Events, People, Technology